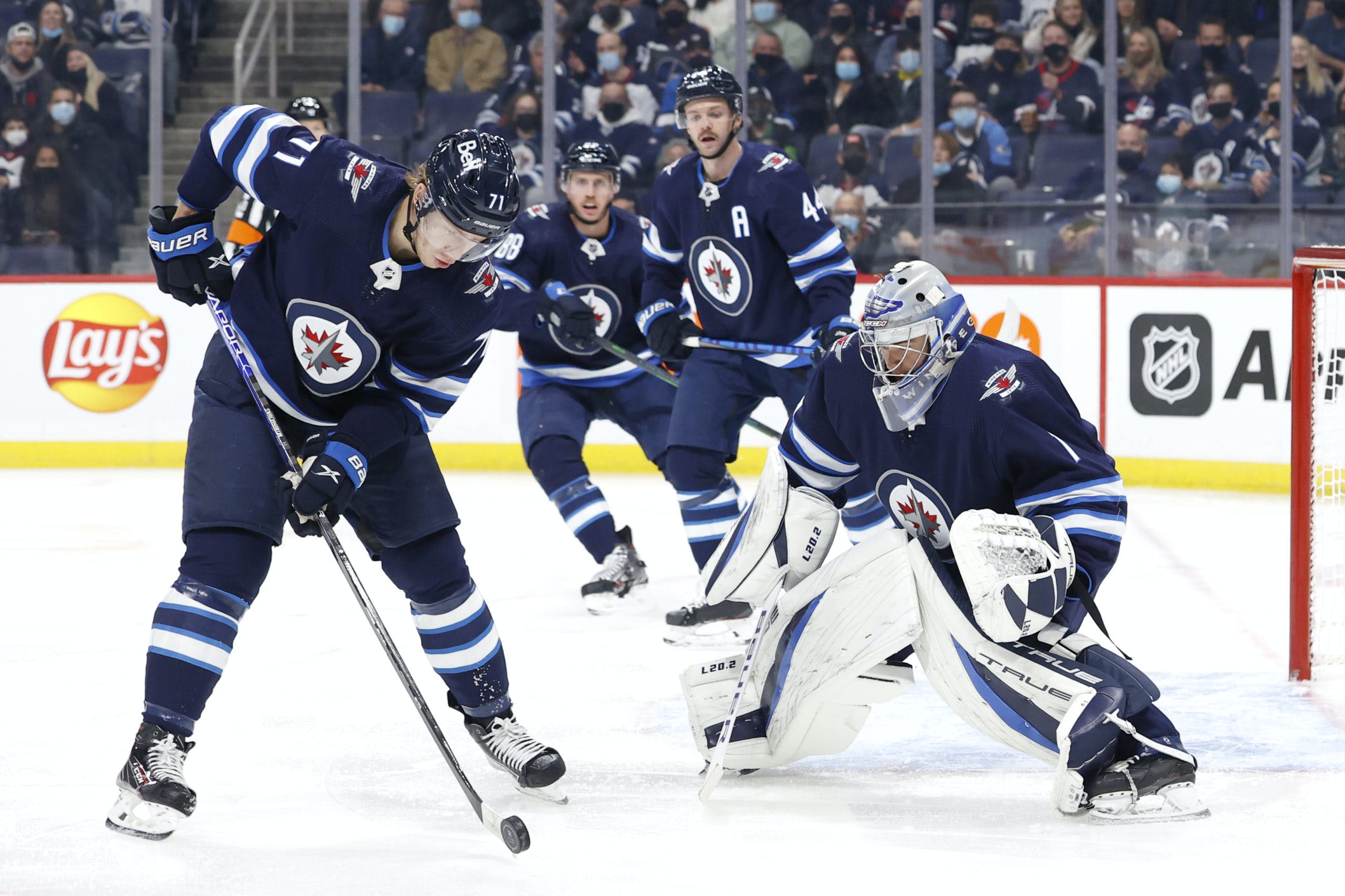 By Thomas Hall
1 year ago
Nearly one month into the 2021-22 season, the Winnipeg Jets are one of the few remaining teams in the National Hockey League without having played a back-to-back series yet, however, all of that changes this weekend.
Starting Friday, the Jets are scheduled to play on consecutive nights for the first time this season – and what’ll also be the first of two occasions in November – the first matchup will come against the 1-8-2 Chicago Blackhawks. Following this Central Division meeting, the 3-2-2 New York Islanders will come to Canada Life Centre for a Saturday night showdown.
Granted, while neither of these two opponents is off to a strong start, particularly the franchise from the windy city, this upcoming two-game span should serve as a quality test for Winnipeg’s skaters as they attempt to battle some adversity while playing on short rest. But considering this club has already faced significant time-zone challenges early on, thanks to two separate west coast trips, they should be ready for this next hurdle.
For a preview of what to expect from this back-to-back series, here are three storylines fans should be aware of ahead of the Jets’ next two games:

After missing Tuesday’s contest against the Dallas Stars due to the birth of his baby son, there was an expectation that goaltender @Connor Hellebuyck would return to action during Wednesday’s practice, but that wasn’t the case as he was held out due to an illness.
Since that issue also forced him to miss the team’s morning skate Thursday, Hellebuyck has been officially ruled out for this contest against the Blackhawks and there’s no guarantee that he’ll be available for Saturday’s matchup against the Islanders. As a result, backup @Eric Comrie, who’s undefeated through two games this season, will receive an opportunity to make a second consecutive start.
Coming off his latest performance, which saw him stop 24 of his 27 shots against, Comrie is slated to make his second career appearance against Chicago – his first came back on Mar. 29, 2018. In that performance, the 6’1″ netminder allowed six goals on 42 shots against, leading to his second-ever defeat with Winnipeg.
Now almost three years later, while surrounded by a completely different blueline, the 26-year-old will attempt to overcome that forgettable showing as he looks to build off his encouraging start to the 2021-22 campaign.
As for the second half of this back-to-back series, if Hellebuyck isn’t ready to suit up against New York, odds are Comrie won’t be called upon to play a second straight night. In turn, that’d likely open the door for prospect @Mikhail Berdin to make his first career start in the NHL.

Extended String of Dressing 11 Forwards, Seven Defensemen Could End During Second Half of Back-To-Back Series

Ever since captain @Blake Wheeler entered the league’s COVID-19 protocol on Oct. 19, the Jets have operated with 11 forwards and seven defensemen, though both Wheeler and @Mark Scheifele have since returned to the lineup, coach Paul Maurice has continued to utilize that same gameplan.
While that’s exactly how the active roster will be constructed Friday against the Blackhawks, with a busy weekend of hockey ahead, it’d make plenty of sense to adjust back to 12 forwards and six defensemen for Saturday’s game against the Islanders. For someone like @Riley Nash, who’ll be a healthy scratch for a third consecutive time during the first half of this back-to-back series, seeing his name back in the lineup could be a major sigh of relief.
On the other hand, defenceman @Nathan Beaulieu, who’s directly benefited from this 11/7 style, will probably draw out of the lineup if Winnipeg does indeed decide to dress six blueliners Saturday. Having said that, based on his success on the penalty kill, it’s also possible the veteran skater could remain active for both games, forcing @Logan Stanley into the press box.
Regardless of which skaters are featured on the lineup card, when it comes to the showdown against New York, inserting a 12th forward could help prevent key players like @Kyle Connor, @Nikolaj Ehlers, @Pierre-Luc Dubois, @Andrew Copp and @Mark Scheifele from becoming overly exhausted.

Surprise, surprise… The third period has more often than not served as an extremely eventful and occasionally mind-blowing point of the game for Winnipeg so far this season – who could’ve predicted that heading into the fall? Oh wait, almost everyone who follows this team.
In total, the Jets are currently tied for the second-most goals scored (14) in the third period among all 32 teams in the league, according to NHL.com. But as we all know, they also possess a frustrating tendency of allowing a fair share of scores late in regulation, 11 in 2021-22 to be exact.
Ironically, that’s also the same number of goals the Blackhawks have given up in the third period this season. But considering that franchise has also yielded the most goals against (42) in the league through 11 games, there’s a pretty strong chance that figure could climb even higher this weekend.
As for the Islanders, well, they operate much more conservatively and have allowed the second-fewest goals against (19) over eight contests, however, almost half of those markers have come in the final frame. Since they’ve surrendered eight goals in the third period this season, paired with the Jets’ ability to score late, there could be the potential for some exciting drama near the end of regulation.
So if you’re planning to watch both of these matchups, don’t you dare miss the final 20 minutes in either of these contests, if you do odds are something magical may take place – something this team has already been known for early on.
Uncategorized
Recent articles from Thomas Hall