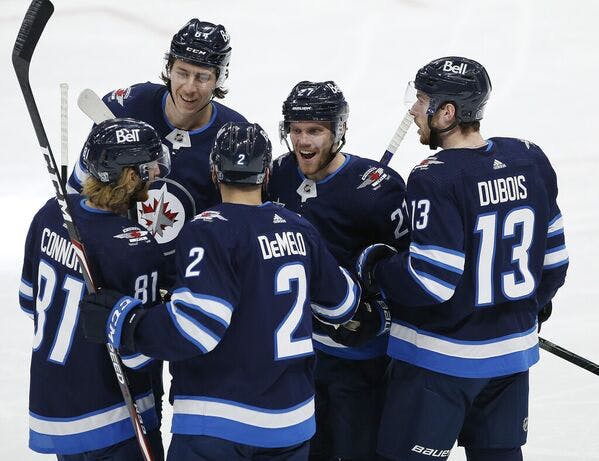 By Thomas Hall
1 year ago
Coming into the opening round of the 2021 Stanley Cup Playoffs, very few experts believed the Winnipeg Jets could pull off the impossible and knock off the Edmonton Oilers during this series, and yet, that’s exactly what happened in just four games.
Despite being doubted throughout this playoff series, the Jets overcame plenty of adversity and ultimately found a way to complete the four-game, series sweep of the Oilers. Though this team never led in Games Two or Three and controlled the scoreboard for less than 10 minutes in Game Four, their determination to fight back never wavered, which allowed them to claw back from every single deficit they faced.
While matching up against forwards @Connor McDavid and @Leon Draisaitl wasn’t an easy task, Winnipeg’s blue line was ready for the challenge, particularly defensemen @Josh Morrissey and @Dylan DeMelo, who defended extremely well over these four games. Channeling that same mindset of overcoming adversity, DeMelo, 28, always believed his club was ready for this difficult feat and was hoping to prove that to the rest of the hockey world.
“We knew the matchup was coming and we didn’t shy down from it,” DeMelo discussed. “I think we just took it as a challenge and kind of wanted to prove everybody wrong that we could handle it. Not just us two, but I think as a whole D-core and as a whole team. We heard that outside noise and we thought that we could ruin some people’s playoff pools. I think the guys really stepped up, took that opportunity and ran with it.”
Even though DeMelo has only played 70 career games – including playoffs – with the Jets, the former sixth-round pick has still become extremely familiar with this team’s remarkable culture and believes it’s one of the biggest reasons they were able to come away victorious against the Oilers in round one. In particular, watching captain @Blake Wheeler surrender his body in Game Four helped set the tone in the defensive zone, forcing everyone to replicate that same level of effort each time they stepped on the ice.
“Our leadership group here is unbelievable,” DeMelo explained. “It’s doing the right thing all the time. Blake [Wheeler] blocks a shot in his mid-section area there. This is a guy that’s a point per game player, top player in the league and for him to take a shot like that it just rallies everybody – that’s as important as scoring goals. So when you see your captain do that it’s a trickle-down effect that everybody in the lineup is going to play that hard and do the right things like that.”
Over 52 games in the regular season, DeMelo averaged just 16:58 minutes of ice time per game, producing nine assists, 76 hits, 58 blocks, 44 shots on goal, nine takeaways and a +10 rating.
As for this postseason, the right-hander has averaged 26:01 minutes of ice time per game, creating 12 hits, nine blocks, eight shots on goal, two takeaways and a +2 rating.
Since Winnipeg punched its ticket to the second round on Monday, or Tuesday morning depending on your time zone, they’ll receive some much-needed rest throughout this week and will await the winner of the Toronto Maple Leafs and Montreal Canadiens series. But in the meantime, DeMelo and the rest of his teammates will attempt to reconfigure their sleep schedules and will also focus on making sure their bodies are fully recovered from this first-round matchup.
“After [Monday’s] game, it was definitely tough, like J-Mo said, just to get down,” DeMelo mentioned. “You get back, it’s 2:30 in the morning, 3 o’clock when you get into your house. You’re still on a high as much as you are tired, [it’s] hard not to come off that high. I actually feel worse today [Wednesday] than I did yesterday because I think I just kept reliving it with talking to my family and talking to friends that wanted to ask about the game and how did it feel?
“I think we’ll use these next couple days to maybe get everybody back to their sleep schedule and use the rest appropriately here.”
Jets News
Recent articles from Thomas Hall