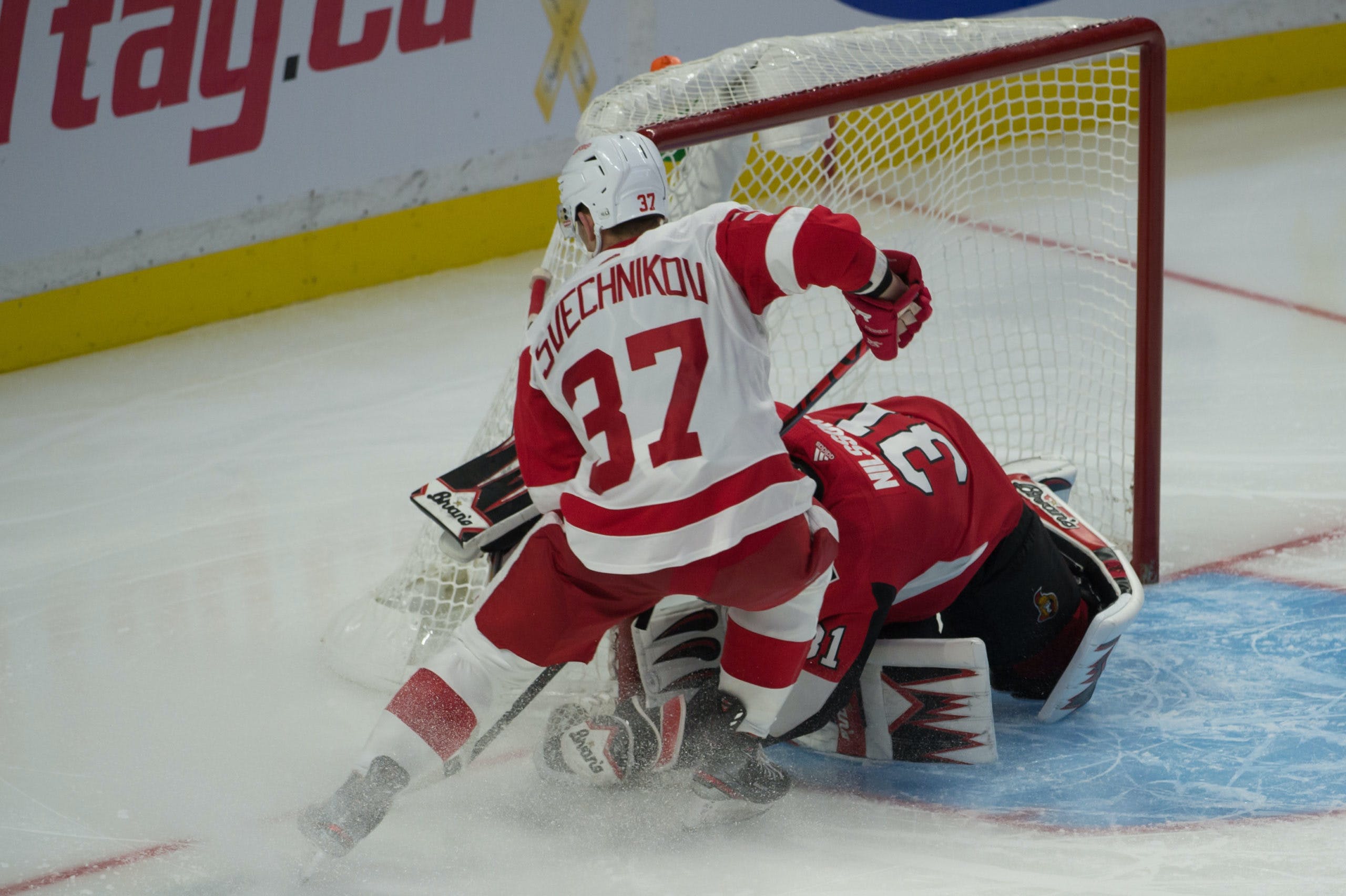 By Thomas Hall
1 year ago
Following a fairly brief off-season, training camp is slated to open for the Winnipeg Jets on Thursday, and considering the amount of pressure that’s facing this team, there shouldn’t be any shortage of interesting storylines in the coming days.
While the majority of the Jets’ roster is already set, at least, for the most part, there are still plenty of question marks surrounding the vacant third-line position, the construction of the fourth line, the seventh defenseman role along with which goaltender will serve as starter @Connor Hellebuyck’s backup. The good news is all of these concerns are expected to be addressed over the next few weeks.
Though skaters like @Jansen Harkins, @David Gustafsson, @Dominic Toninato, @Kristian Vesalainen, @Riley Nash and others will likely receive most of the attention regarding these roster battles, there are also a couple of under-the-radar names that fans should keep an eye on as well.
With that in mind, here are four players to monitor throughout training camp:

After spending the last six seasons inside the Detroit Red Wings organization, forward @Evgeny Svechnikov wasn’t tendered a qualifying offer over the off-season and became an unrestricted free agent for the first time in his young career. With limited options available, the 24-year-old ultimately agreed to an AHL contract with the Manitoba Moose, which also included a professional tryout with the Jets.
Considering Svechnikov occupied a bottom-six role during his tenure with the Red Wings, he’s likely to compete for a similar role this fall, although his best chance to break camp in the NHL seems to be as a fourth-line winger. Building off that, the former first-round selection will also probably receive an opportunity to battle for the 13th forward spot, which could be decided between just a few skaters.
Since Harkins, Nash and Toninato are all eligible for waivers, these three forwards can probably be considered as locks to make Winnipeg’s roster coming out of camp. As for Gustafsson and Vesalainen, they’re both exempt from waivers, meaning either of them could easily be assigned to the Moose without first having to be sent through the waiver wire.
As a result, it’s probably safe to assume that Gustafsson, Vesalainen and Svechnikov will be competing against each other for the final two roster spots. While determining the winners of this roster battle may seem like a stress-free decision, the former Red Wing could potentially draw some attention from the coaching staff, adding some difficulty to this final decision.
Even though Svechnikov only participated in 21 NHL games in 2020-21, he still displayed flashes of potential over his 11:49 minutes of ice time per game, as he produced three total goals, one power-play goal, eight total points, two power-play points, 21 shots on goal, 20 hits, six blocks and a pair of takeaways.
So while the 6’3″ forward is without a doubt on the outside looking in, his chances of making this team might not be as glim as some people may think.

Similar to Svechnikov, forward @Kristian Reichel is likely another forward most fans aren’t expecting to break camp with the Jets next month, and rightly so. The 23-year-old has yet to make his NHL debut and has spent each of the last three seasons in the AHL, however, he does possess a trait that could work to his advantage.
Reichel features a right-handed shot, and since Nash is the only other right-hander competing for a bottom-six role, that could allow him to rise up in the depth chart this season. Sure, it’s certainly not against the rules to feature a fourth line that only consists of left-handers, but it’d probably be wise to at least consider featuring a second righty among that group.
Despite signing as an undrafted free agent in 2018, the Czech Republic native has come a long way since his rookie season with the Moose, where he only posted two goals and 10 points through 55 games. Over his two seasons since then, the young righty has taken multiple steps forward offensively, resulting in 18 goals and 29 points through 68 contests.
It might be a long shot for Reichel to make Winnipeg’s roster coming out of camp, but even if he falls short, it wouldn’t be shocking to watch him make his NHL debut at some point in 2021-22.

Moving on to defence, this is expected to be the first time since 2018-19 where there isn’t a ton of uncertainty involving the Jets’ backend, which is something the front office has been desperate to achieve in each of the last two off-seasons.
But now that we’ve reached this satisfying point, there doesn’t seem to be much room at the NHL level for top young defenders like @Ville Heinola or @Dylan Samberg. With all six positions seemingly filled on the blueline, featuring @Josh Morrissey, @Nate Schmidt, @Neal Pionk, @Brenden Dillon, @Dylan DeMelo and @Logan Stanley, the sole roster battle on defence will be deciding the seventh defender role.
Since veteran @Nathan Beaulieu has returned from his season-ending shoulder surgery, he’s likely viewed as the favourite for this position, however, removing his $1.25 million cap hit in favour of a younger and cheaper skater could be more beneficial in the long run.
Given the lack of consistent playing time that’ll be available, unfortunately, it’d make much more sense to assign Heinola and Samberg to the Moose, at least to begin the season, which brings us to @Johnathan Kovacevic. While the same argument could be made for the 24-year-old, his right-handedness and two seasons of AHL experience might allow him to push Beaulieu for this final roster spot.
Not to mention, Kovacevic enjoyed the top statistical performance of his young career in 2020-21, where he recorded two goals, 14 points and was named the Moose’s Top Defenceman of the Year.
Considering the Jets’ blueline is expected to feature just a pair of right-handers this season – not including Schmidt’s ability to play on the right side – it couldn’t hurt to feature a third righty on the roster in case of an injury. It’s an unlikely outcome, but one that’s certainly possible, even with coach Paul Maurice behind the bench.
If Beaulieu indeed secures the seventh blueliner position, Kovacevic should be poised to enjoy another productive performance in the AHL.

Sticking with the right-hander theme, @Nelson Nogier is another defenceman that could potentially factor into the conversation regarding the extra blueliner position. But unlike Kovacevic, the 25-year-old has spent some time in the NHL over his career, 11 games to be exact, although he’s been limited solely to the AHL in each of the last two seasons.
During that time, Nogier has appeared in 70 games with the Moose, scoring just two goals and 12 points over that span. As for his performance in the NHL, the 6’3″ defenceman remains without a single point and has created 12 hits, nine shots on goal along with six blocks over his 11:34 minutes of ice time per game.
While unlikely, if the former fourth-round pick were to impress in camp, then perhaps his defensive traits could earn him the edge over the rest of the competition.
Uncategorized
Recent articles from Thomas Hall