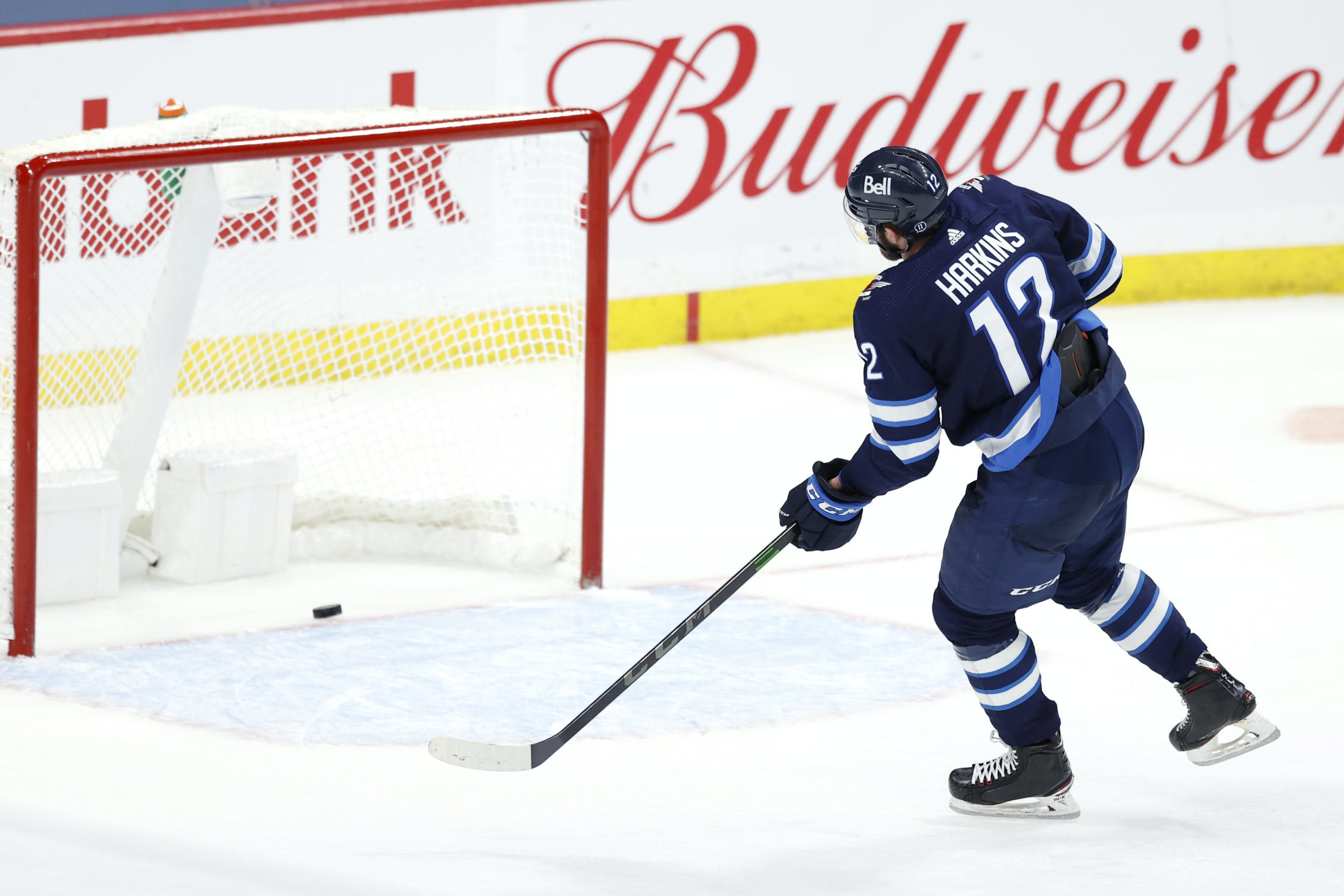 By Thomas Hall
1 year ago
Under coach Paul Maurice, the Winnipeg Jets have mostly featured veteran skaters within their bottom-six forward group over the years and that was the case once again this past season, which made it very difficult for someone like @Jansen Harkins to receive regular playing time.
Originally selected by the Jets in the second round of the 2015 NHL Draft, Harkins split the next three seasons between the WHL, ECHL and the AHL, before becoming a full-time player with the Manitoba Moose in 2018-19. Enjoying a breakout performance during the following season, the 24-year-old scored seven goals and 31 points in 30 games with the Moose, ultimately earning him a promotion to the NHL, but he hasn’t been able to force his way into a regular spot just yet.
Here are some positives and negatives from Harkins’ second season in the league:

Given that Harkins only participated in 26 of the possible 56 games this past season, there weren’t many things that went right for him during the shortened schedule, however, he did start to generate some offensive success through the final stretch of the regular season.
From Apr. 26 to May 14, the 6′ 2″ forward appeared in seven games and averaged just 8:57 minutes per game, but produced one goal, two assists, four shots on goal, three scoring chances and two high-danger chances. In addition, he also delivered six hits and drew his third penalty of the season during that same span.
Digging deeper into his showing, Harkins helped the Jets win their final game of the regular season, which came against the Toronto Maple Leafs, as he added an empty-net goal to earn his team a 4-2 victory.
Unlike last season, the left-hander received a decent amount of opportunities to showcase his skills in the faceoff circle, and while he lost all five of his faceoff attempts in 2019-20, he won 11 of the 18 draws he took this past season.

With forwards @Mathieu Perreault, @Nate Thompson and @Trevor Lewis positioned on Winnipeg’s fourth line throughout the majority of the season, Harkins was forced to serve as a healthy scratch for a large chunk of the schedule, preventing him from surpassing his games total (29) from the 2019-20 campaign.
Even when he was in the lineup, the Ohio native was solely utilized on the fourth line and didn’t receive any chances to play alongside anyone other than Thompson and Lewis, limiting the youngster’s ability to make a considerable offensive impact. As a result, he endured a 21-game pointless streak to begin the season and was unable to register his point of the year until Apr. 30.
After sitting in the stands during the first round of the playoffs, Harkins was called upon in Game Two of the second-round series against the Montreal Canadiens, as he was needed to serve as a replacement for teammate @Mark Scheifele. But unfortunately, the former second-round pick earned just 7:46 minutes of ice time and could only muster up a trio of hits.

Looking ahead to the Seattle Kraken Expansion Draft, Harkins is expected to be one of the few skaters the Jets will be required to leave unprotected later this month, although it seems very unlikely that he’d be chosen over someone like @Mason Appleton.
As for his contract situation, the left-handed center will be entering the final season of his two-year, $1.45 million contract, according to PuckPedia.com, and is slated to become a restricted free agent after the 2021-22 campaign concludes. Given the success he enjoyed in the faceoff dot this past season, paired with Thompson’s unrestricted free agent status, the encouraging young forward could receive an opportunity to compete for the center position on the club’s fourth line next season.
Uncategorized
Recent articles from Thomas Hall