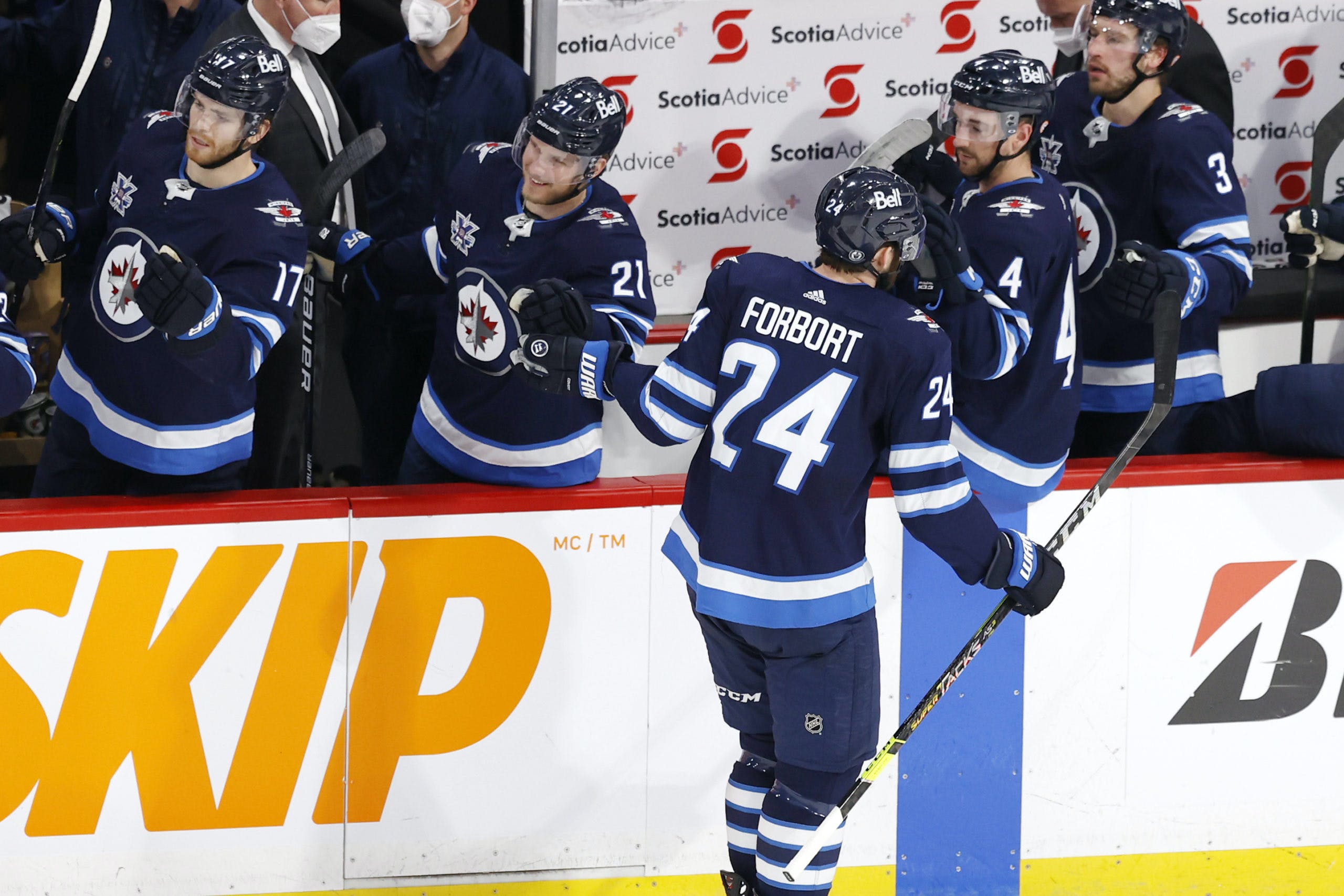 By Thomas Hall
1 year ago
After splitting the 2019-20 campaign between the Calgary Flames and Los Angeles Kings, defenseman @Derek Forbort reached the open market last off-season and ultimately decided to sign with the Winnipeg Jets, agreeing to a one-year, $1 million contract.
Despite occupying a bottom-two role over the last couple of seasons, coach Paul Maurice provided Forbort an opportunity to skate alongside teammate @Neal Pionk on the club’s second pairing, and for the most part, this duo remained together throughout most of the 2020-21 campaign. While his performance was far from perfect, given the veteran’s inexpensive salary, bringing him in probably isn’t a move the front office regrets.
Here are some positives and negatives from Forbort’s first and potentially only season in Winnipeg:

Considering Forbort’s off-season back surgery delayed his start to the 2019-20 campaign, he wasn’t able to participate in more than 20 games during that season, although staying healthy wasn’t an issue for him this past season as he played all 56 games.
Thanks to his ability to consistently remain on the ice, the 29-year-old found a way to dramatically surpass his offensive results from last season, where he produced just one assist. In total, the veteran blueliner averaged 20:45 minutes of ice time, generating two goals (tied for his career-high), 12 points, 67 shots on goal, 36 scoring chances, 10 rebounds, three high-danger chances and a 1.76 xG rate, according to NaturalStatTrick.com.
While Forbort certainly isn’t known for his scoring, that’s exactly what he brought in Game One of the second-round series against the Montreal Canadiens, which saw his second career playoff goal trim his team’s deficit to just one goal midway through the third period.
Along with making a surprising offensive impact, the former King also did an excellent job of breaking up passes and blocking shooting lanes throughout the regular season, as he led all Jets defensemen in blocks (115) and finished tied for the most takeaways (19) as well.
Even though Forbort struggled at times during five-on-five situations, he didn’t endure any of those woes on the penalty kill and formed a strong connection with linemate @Dylan DeMelo, allowing both of them to serve as effective penalty killers all season long. Comparing the former first-round pick’s metrics to the rest of his teammates, he recorded the second-highest FF percentage (11.5%) and HDCF percentage (8.5%), along with the third-highest CF percentage (10.1%) among all defenders who compiled at least 50:00 minutes on the penalty kill.

Unlike on the penalty kill, Forbort and his lack of agility became defensive liabilities during five-on-five situations in 2020-21, which ultimately resulted in numerous breakaway chances for the opposing team.
Far too often, the 6′ 4″ defenseman was caught pinching in the offensive zone at the wrong time or was exposed in the neutral zone, allowing other teams to position themselves behind him and create easy scoring chances against goaltenders @Connor Hellebuyck and @Laurent Brossoit. Unfortunately, these even-strength struggles outweighed the success he enjoyed when playing shorthanded, leading to plenty of frustration for the coaching staff and the fanbase.
Digging into his defensive results, Forbort was on the ice for the most goals allowed (42), tied for the most high-danger goals against (23), the second-most scoring chances (465) and high-danger chances against (182), and the second-worst xGA rate (37.8) during five-on-five play among all Winnipeg defenders.
Carrying these defensive flaws into the postseason, the left-hander failed to redeem himself from his struggles in the regular season and remained ineffective in the defensive zone through all eight contests. In particular, the Minnesota native struggled mightily in high-danger areas, allowing both the Edmonton Oilers and Canadiens to create sustained pressure in the offensive zone.
As a result, Forbort’s on-ice metrics during five-on-five play ranked him last in total goals (seven) and high-danger goals against, second-last in xGA (8.0), tied for second-last in high-danger chances allowed (37) and third-last in scoring chances allowed (81) among all Jets defenders.

With Forbort’s one-year deal set to expire, he’s slated to become an unrestricted free agent this summer, and given his defensive struggles from this past season, there’s a pretty strong chance he won’t be offered a chance to return for a second season with the Jets.
Since this team also has a few young defensemen who could earn regular playing time in the NHL next season, bringing Forbort back would likely prevent talented prospects like @Ville Heinola and @Dylan Samberg from staying in the lineup. But wherever the hard-nosed defenseman lands in free agency, he’ll probably be expected to make a similar impact on the penalty kill in 2021-22.
Uncategorized
Recent articles from Thomas Hall