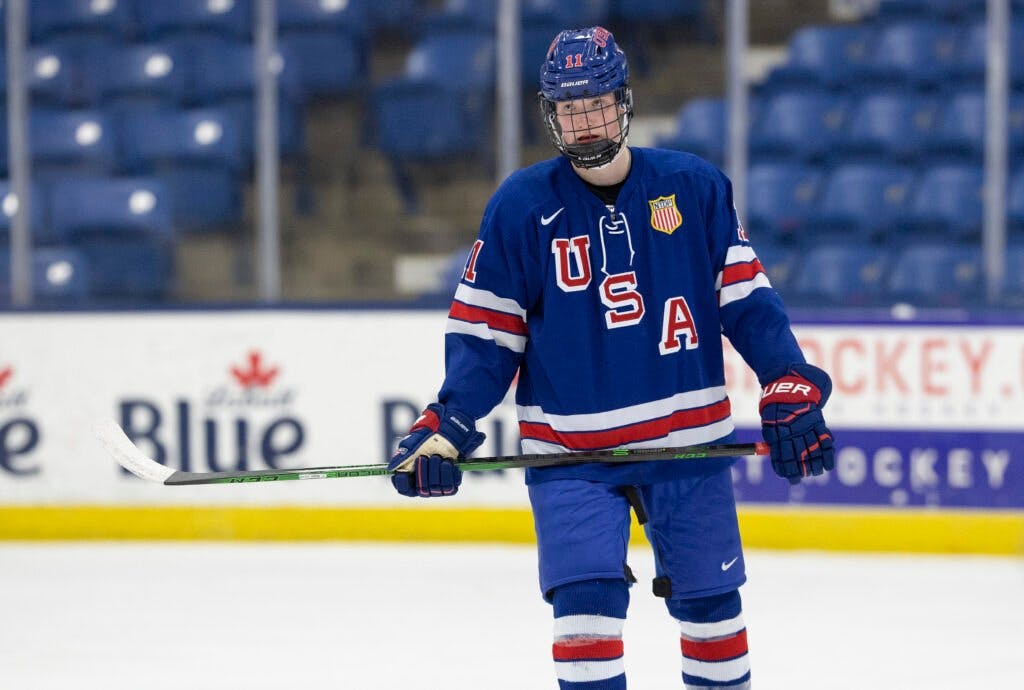 By Thomas Hall
1 year ago
The Seattle Kraken Expansion Draft and the 2021 NHL Draft are both in the rear-view mirror, however, free-agent frenzy is just around the corner and is slated to open Wednesday at 11 am CT – who’s ready to watch a day-long signing show?
With eight unrestricted free agents expected to hit the open market, according to PuckPedia.com, there’s a strong chance the Winnipeg Jets could be fairly active once signing season begins in a few days, especially since they’re searching for a top-four defenseman this off-season. Along with targeting a quality blueliner, the front office will also probably be looking to solidify the club’s top-six forwards and the backup goaltender position as well.
Can general manager Kevin Cheveldayoff and his staff acquire all these assets before next season begins? Hopefully, but for now, let’s focus on some of the fanbase’s questions for this week’s mailbag.

What’s Chaz Lucius’ Ceiling? And How Quickly Could He Make His NHL Debut?

As of right now, it’s very high. Given the lack of exposure at the junior level throughout this past season, this year’s NHL Draft was expected to feature plenty of surprise selections, although the Jets probably didn’t think forward Chaz Lucius would still be available at 18th overall.
Luckily, the 18-year-old center wasn’t selected by the 16 other clubs ahead of them, allowing Winnipeg to take one of the most talented skaters in the draft. Thanks to his impressive creativity and hand-eye coordination, the right-hander excelled as a playmaker in junior and also proved he can make a difference with his pinpoint accuracy as well.
Though Lucius is largely known for his offensive capabilities, the 183-pound skater is capable of making his presence felt in the defensive zone, which he displayed numerous times in 2020-21 by breaking up passes and exerting a ton of effort to clear the middle of the ice.
Considering the Jets’ 2021 first-round selection has already committed to the University of Minnesota for next season, he’ll likely spend the next couple of campaigns suiting up for one of the top teams in the Big Ten Conference. But once he eventually makes the jump over to professional hockey, the youngster projects to be a top-six forward and could potentially make his NHL debut in 2023-24.

That’s a difficult question to answer. Since it appears backup @Laurent Brossoit will hit the open market, there’s no guarantee he’ll return for a fourth season with the Jets in 2021-22, especially if he receives an opportunity to play more games elsewhere.
If Brossoit indeed departs through free agency, that could open the door for prospect @Mikhail Berdin to emerge into a backup role at the NHL level next season. Having said that, the 23-year-old posted a 2.89 goals-against average and a .897 save percentage through 30 games with the Manitoba Moose this past season, so it’d probably be wise to acquire some insurance for that position.
Given that Winnipeg will likely focus most of its resources on defense and a top-six forward, odds are the front office won’t be interested in a high-priced netminder and would be more comfortable spending a similar amount to Brossoit’s $1.5 million salary from the 2020-21 campaign. Unfortunately, there aren’t expected to be many quality goaltenders available in that price range.
Unless this team is willing to search through the trade market, which might be a more favorable route, they may have to choose between backups like @Brian Elliott or @David Rittich, who both earned less than $3 million in 2020-21.
Obviously, this wouldn’t be an ideal situation, but signing one of those two goalies would provide some internal competition for the backup spot behind starter @Connor Hellebuyck.

Are the Jets Too Left-Handed? Specifically on the Power Play?

Yes, this is something that’ll need to be addressed this summer. As currently constructed, the Jets only have four right-handed skaters on their NHL roster – including @Blake Wheeler, @Mark Scheifele, @Neal Pionk and @Dylan DeMelo.
Within the top-six forwards, this isn’t a major concern because winger @Nikolaj Ehlers is comfortable playing on the right side during five-on-five situations. But considering former Jet @Mason Appleton, who’s right-handed, was selected by the Kraken in the expansion draft, this team’s third line is now in need of a righty who can fill his spot alongside teammates @Adam Lowry and @Andrew Copp.
Unless veteran @Trevor Lewis re-signs this off-season, it’d also be wise to acquire a right-hander for the fourth line, especially since depth forwards @Jansen Harkins, @Dominic Toninato, @Kristian Vesalainen and @David Gustafsson are all righties.
On defense, the front office is probably prioritizing skill over handedness as DeMelo and Pionk could serve as the two right-handers within the top four. Even if that’s how coach Paul Maurice and his coaching staff align their defenders, this club would still require a right-handed blueliner for the bottom defensive pairing, as most of the young defensemen in the minors are lefties.
Focusing on Winnipeg’s top power-play unit, Scheifele and @Kyle Connor will likely continue to operate directly across from each other on the wing, allowing Wheeler to serve as a playmaker at the side of the net. But on the second unit, it’d be beneficial for management to acquire a right-handed forward who’s capable of firing shots from the right side of the rink, allowing Ehlers to thrive on the left side.
Uncategorized
Recent articles from Thomas Hall