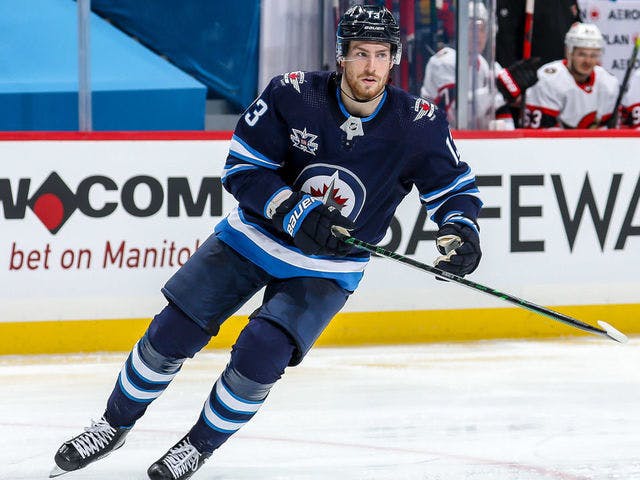 By Thomas Hall
1 year ago
After sweeping the Edmonton Oilers in the opening round of the 2021 Stanley Cup Playoffs, the Winnipeg Jets have received a much-needed week off to recover for the second round and are hoping forward @Pierre-Luc Dubois can become a major force in helping this team defeat either the Toronto Maple Leafs or the Montreal Canadiens.
Coming over in a blockbuster trade back on Jan. 23, Dubois, 22, was acquired from the Columbus Blue Jackets in exchange for forwards @Patrik Laine and @Jack Roslovic, providing all three skaters a change of scenery. While the former first-round pick’s tenure with the Jets got off to a fantastic start, as he scored three goals and five points over his first four games, he struggled to make a consistent offensive impact through the rest of the way.
But considering Dubois was required to quarantine for 14 days before being allowed to practice with his new team, it’s completely understandable that he went through some highs and lows throughout the regular season. Along with being locked in a hotel room for two weeks, the left-hander also needed to learn a new system and suffered a lower-body injury in early February, which coach Paul Maurice feels were huge challenges he was forced to overcome.
“He had such a difficult start and that start goes back to last summer,” Maurice explained. “What he went through in that transition time out of Columbus. The quarantine, the injury, the different systems, the different style of game, and then he’s just been building on it.
“The time he had off the ice was a real challenge for him because it’s not a normal two-week block off the ice where you’re in a weight room and you’re still skating and you’re coming back from injury. He’s locked down. So it took him a while to get back to it.”
With Dubois returning from an undisclosed injury during Game Two of the playoff series against Edmonton, being able to participate in the final three contests of that showdown seemingly helped him improve his conditioning and could allow him to make a significant impact in the next round. Building off that theory, Maurice is confident the farther this club advances in the playoffs, the more productive his power-forward will end up being in the long run.
“I think he’s just been building and he’ll just keep getting better,” Maurice discussed. “The longer we can play the more we’re going to see of what he’s capable of doing.”
Through 46 regular season games split between the Jets and the Blue Jackets this season, Dubois averaged 15:02 minutes of ice time per game, producing nine goals, 21 points, six power-play points, 76 shots on goal, 59 hits, 26 blocks, 18 takeaways and a 43.5% faceoff percentage.
As for his results during the postseason, the 6′ 3″ center has averaged 17:46 minutes of ice time per game, creating two assists, nine shots on goal, seven hits, three blocks and a 40.0% faceoff percentage.
In comparison, the former Blue Jacket averaged 22:57 minutes of ice time per game, recording four goals, 10 points, 27 shots on goal, 20 hits, 10 blocks, four takeaways and a 55.9% faceoff percentage over 10 playoff games last season.
Since Dubois is signed through the 2021-22 campaign and will also become a restricted free agent during that following off-season, it seems he’s just scratching the surface of his potential with the Jets and could advance his craft even further down the road. Even if that doesn’t occur during this postseason, Maurice believes the youngster’s developmental phase is far from complete but is on the right path to completing that feat in the near future.
“I think the key piece to this is… what can he do?” Maurice detailed. “Like going forward, where are his ceilings? And I don’t think we’ve gotten near any of them yet. He’s gonna be more powerful, faster, stronger – this is a big-body guy.
“This guy is going to be a real, real good player for us. I haven’t looked at the production of numbers ever with him as an important part of what he does. We want him to put pucks in the net, for sure, but we want to develop a certain style of player and we think we’re on path to get that.”
Jets News
Recent articles from Thomas Hall