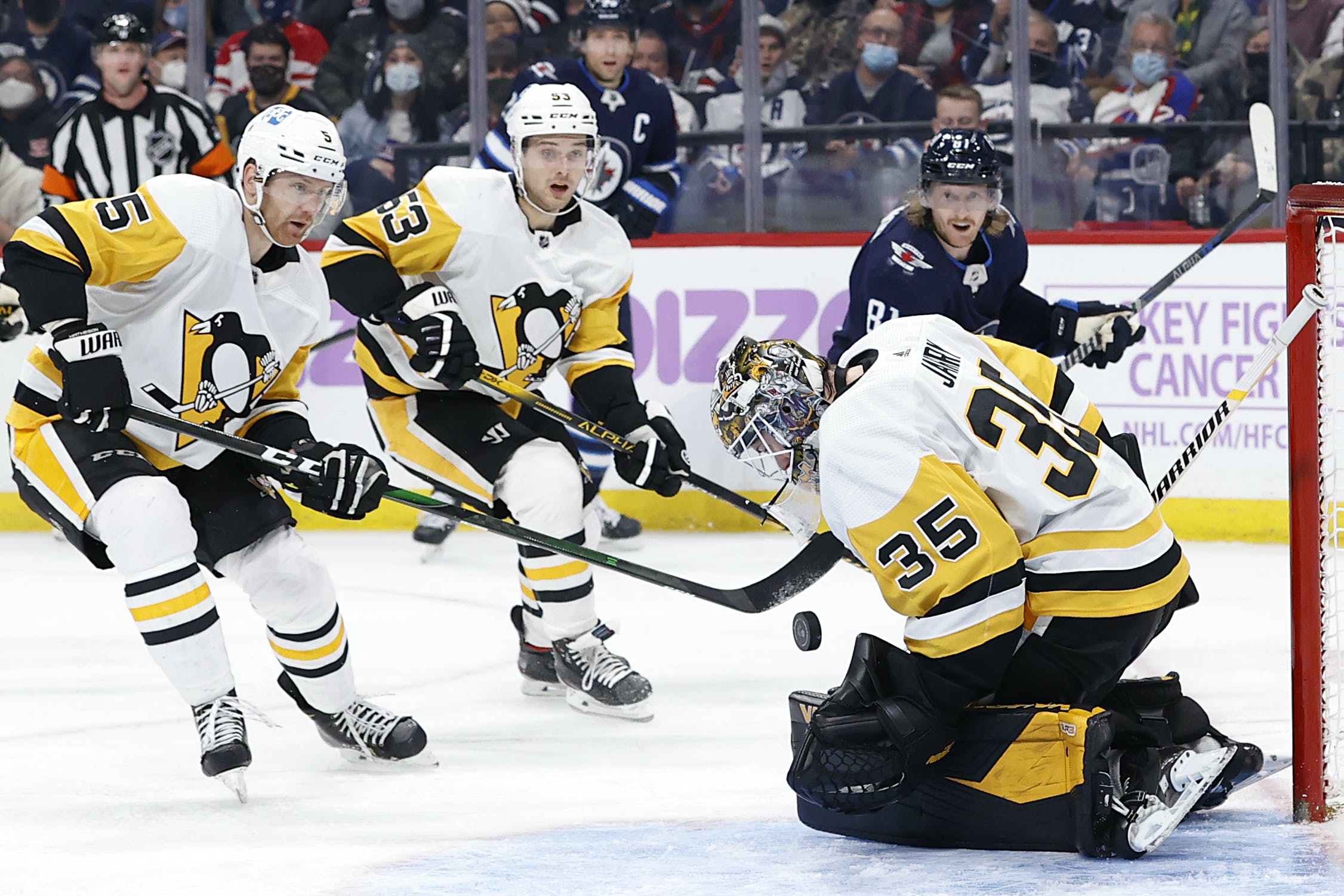 By Thomas Hall
10 months ago
After having lost three consecutive games, the Winnipeg Jets entered Sunday needing to come away with two points in the standings, but despite their best efforts, they finished just a little short in that regard.
Off the jump, taking on the Pittsburgh Penguins, who entered this game on a four-game winning streak, was already destined to be a tough matchup. Add in that the Jets had just played 24 hours ago, and this task became even more challenging for a club finishing an eight-game stretch on the road.
In spite of all these hurdles, Winnipeg struck first early in the opening frame as captain @Blake Wheeler scored his first goal since returning from injury – his second on the season.
Following a strong offensive zone entry from @Mark Scheifele, the 35-year-old captain received a dish from his linemate and showed off some vintage moves while driving hard to the net, finishing with an impressive backhand shot. As a result, the Jets carried a 1-0 lead into the first intermission.
Extending their advantage nearly midway through the second period, forward @Kyle Connor somehow wristed his shot top shelf short-side, earning himself his 22nd marker of 2021-22 – his fourth on the power play. Though this was his only score of the game, the 25-year-old led his club with seven shots on goal and if not for the stellar play of Penguins goaltender @Tristan Jarry, he would’ve cracked the score sheet a few more times.
Nevertheless, Connor’s lone goal on the afternoon provided Winnipeg with a 2-0 edge after 40 minutes. Unfortunately, this team’s two-goal lead couldn’t survive a couple of unlucky series of events in the third period.
Almost across the 13:00 mark of the final frame, defenceman @Brenden Dillon’s defensive-zone exit pass wasn’t completed to Scheifele at the blue line, allowing Pittsburgh’s skaters to regain possession. Once @Evgeni Malkin avoided Wheeler’s stick check, he took a shot on net, which deflected off @Kasperi Kapanen’s skate and into the net.
Then, just nine seconds later, goaltender @Connor Hellebuyck skated to the side of his net to retrieve a dump-in, but as he fired the puck off the boards, it took an awkward bounce and slid towards the other side of his crease. With @Jeff Carter close by, the veteran forward quickly took advantage of this break, blasting his shot home to tie this contest at two apiece.
It was an awful nightmare that, sadly, came to fruition for the Jets at PPG Paints Arena on Sunday. The only moral victory for this franchise was that they didn’t surrender another goal before regulation ended, allowing them to earn a point afterwards.
Despite enduring five minutes of absolute madness in overtime, including several end-to-end rushes for both teams, no goals were scored in the extra frame. In turn, the ol’ pesky shootout was needed to decide this thrilling showdown.
With both goaltenders standing tall in the first round, captain @Sidney Crosby took it upon himself to break this tie – because of course he did – outwaiting Hellebuyck before roofing his shot over the 6’4″ netminder’s glove.
After @Pierre-Luc Dubois and Scheifele were both denied on their attempts, the Penguins had officially completed their miraculous comeback, winning 3-2 in a shootout.
What’s next for the Jets after this disappointing ending? Well, they’ll travel back home and will finally get to host their first home game since Dec. 19 – their final contest before the extended holiday break. Though it’ll be nice to play at Canada Life Centre once again, albeit, in front of just 250 fans, things aren’t about to become any easier for this organization.
As Winnipeg nears the midway point of the regular season, they’re set to host the Florida Panthers – who currently lead the Atlantic Division – Tuesday night. After that, this team will welcome in the Vancouver Canucks before heading out on a two-game road trip to finish the unofficial first half of the schedule.
So as frustrating as these current times are, with the Jets still trailing far behind the playoff race, there’s simply no time to dwell as they need to start racking up a string of victories very soon.
Uncategorized
Recent articles from Thomas Hall