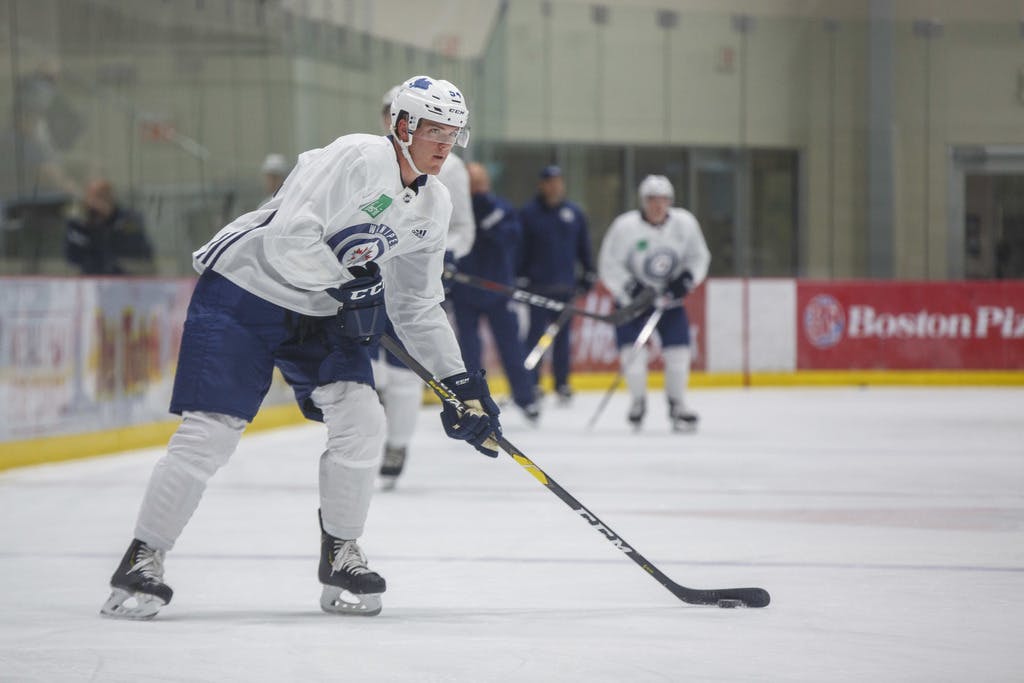 By Thomas Hall
1 year ago
Following one of the most unpredictable off-seasons in NHL history, the Winnipeg Jets have officially opened training camp, meaning the internal roster battles are now set to begin.
While the majority of the focus will likely be directed to the forward group, and rightly so, the Jets’ blue line should also receive plenty of attention as well, as there are multiple talented defensemen competing for a roster spot during this year’s camp. But with only a few jobs up for grabs, it’s possible some of the organization’s top young blueliners won’t carve out a role in the NHL, at least for now, especially since they won’t be able to showcase their skills in any exhibition games.
For someone like @Dylan Samberg – who’ll be participating in his first NHL camp – it’ll be extremely important for the 21-year old to make a strong first impression during this 10-day period of practices and scrimmages. Though it’ll mean waking up early and stepping onto the ice at 7:30 am, which is a lot more common in minor hockey, the 6-foot-4 defenseman is just very happy to finally receive this chance to prove himself and is planning to work his tail off in hopes of earning a roster spot.
“It was awesome,” Samberg discussed. “I’m happy to be out there and I’ve been waiting for this moment for a long time. I definitely don’t want to leave anything out there on the ice. I want to work hard and be the best that I can, show the coaches what I’m able to do and go from there.”
Originally selected by the Jets during the second round of the 2017 NHL Draft, Samberg has spent the last three seasons playing for the Minnesota Duluth Bulldogs in the NCAA and helped them capture consecutive championship titles in 2018 and 2019. Capping off his senior campaign, he agreed to a three-year, entry-level contract back in April.
Despite enduring deep playoff runs in each of his last two seasons at Minnesota Duluth, the youngster hasn’t played in a single live game in nearly an entire year. With that in mind, the left-hander is extremely excited about receiving a chance to participate in some scrimmages with the Jets and is hopeful that experience will help him get back into game shape fairly quickly.
“I haven’t played in a scrimmage or a game in a long time,” Samberg explained. “So that will be helpful as well to show what I can do. You have to make that impression and you have to make it quick. You really have to be consistent all through those 10 days.”
Over his three collegiate seasons, Samberg appeared in 109 games, producing nine goals, 53 points, 0.17 goals per game, and 0.49 points per game during that span.
Considering his lack of NHL experience, there’s a strong chance the Minnesota native will be assigned to the AHL once its season starts on Feb. 5. That being said, the talented young blueliner isn’t focused on where he’ll ultimately end up playing, as he’s currently striving toward performing effectively during this shortened camp.
“It’s very exciting,” Samberg mentioned. “It’s an exciting time for me, finally being able to get the opportunity to go to my first training camp. Just going to try and do my best and see where that takes me.”
Jets News
Recent articles from Thomas Hall