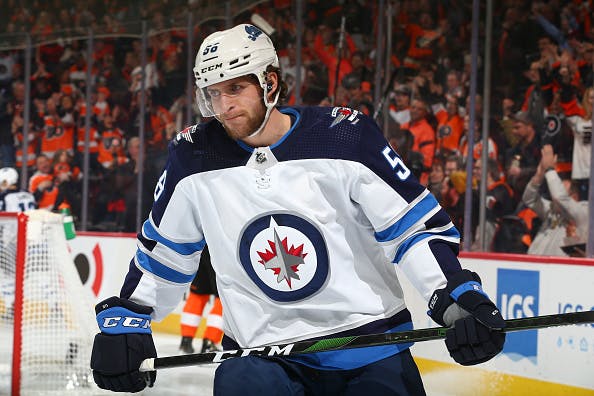 By Thomas Hall
1 year ago
With just a few days remaining before training camp wraps up, the Winnipeg Jets are inching closer and closer to the regular season, but one of their encouraging young skaters still remains on the injury report.
On Sunday, the Jets announced forward @Jansen Harkins – who was absent from Friday’s practice – is still considered “unfit to practice” due to an undisclosed injury.
After departing Thursday’s practice with a minor injury, Harkins was held out of practice the following day and was considered day-to-day heading into this weekend. While the club was hopeful he’d be able to return to the ice on Sunday, it turns out the 23-year old will require some additional time before he can receive a clean bill of health.
But considering the 6-foot-2 center was initially removed from the unfit to practice list ahead of Sunday’s activities, it doesn’t seem his injury will prevent him from suiting up for Winnipeg’s season opener on Jan. 14.
Signing a two-year, $1.45 million extension over the off-season, Harkins will surely be aiming to prove he deserves his new contract and will also be looking to carve out a regular spot in the lineup. With multiple bottom-six roles still up for grabs, the former second-round pick will be eyeing to secure one of those spots whenever he returns to action.
Over his 29 games last season, the left-hander averaged 10:37 minutes of ice time per game, producing two goals, seven points, 29 shots on net, 10 blocks, eight hits, and seven takeaways during his rookie campaign.
Appearing in three playoff contests, the Ohio native witnessed his playing time increase to 11:48 minutes per game, creating one goal, four hits, three shots on net, one takeaway, and one faceoff win.
The Jets are scheduled to open the regular season against the Calgary Flames on Thursday night at Bell MTS Place.
Jets News
Recent articles from Thomas Hall