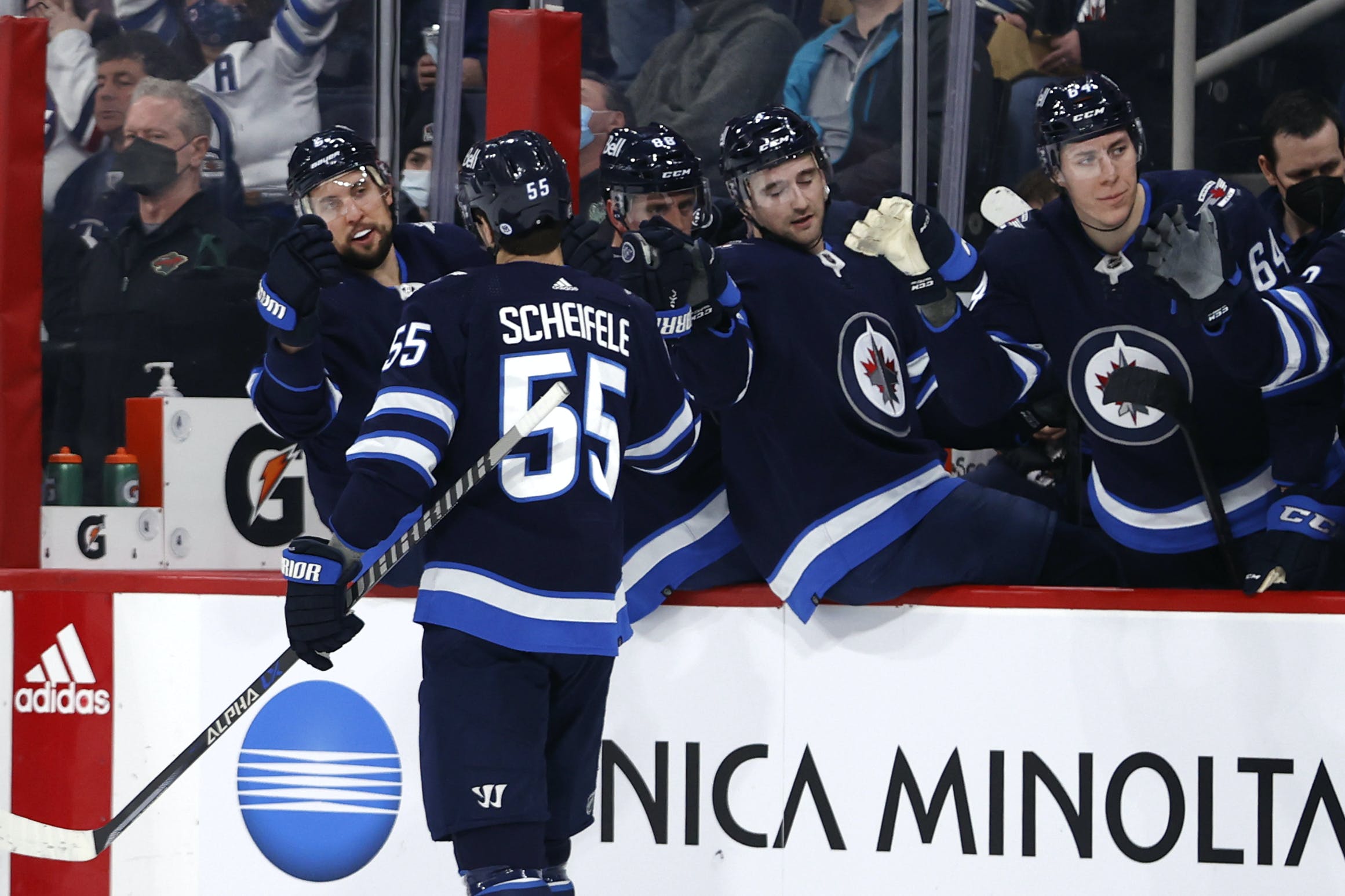 By Thomas Hall
6 months ago
Over the last few seasons, most Winnipeg Jets fans have known what to expect from forward @Mark Scheifele, both offensively and defensively, and the 2021-22 campaign wasn’t any different.
After earning a four-game suspension during the 2021 Stanley Cup Playoffs, which carried over into this past season, Scheifele’s 11th NHL season didn’t start positively as he wasn’t eligible to play in the opener against the San Jose Sharks. Naturally, that didn’t sit well with the fan base.
Upon his return, almost everything the 29-year-old did on the ice was magnified, and understandably so. In that sense, when it seemed his efforts were in question, Jets fans certainly didn’t shy away from releasing their frustrations. Unfortunately, these occurrences spanned throughout the regular season.
With that in mind, let’s revisit Scheifele’s performance from the 2021-22 season and explore what his potential future may hold.

Offensively, it was another notable performance for Scheifele, who reached the 70-point mark for the fourth time in his career. If not for the 56-game schedule in 2020-21, he likely would’ve reached this threshold in four straight campaigns.
In total, the right-hander finished with 29 goals and 41 assists for 70 points through 67 contests. He finished second on the team in both goals and points, behind just @Kyle Connor. Not too shabby for saying he went the first seven games of the season without scoring his first goal.
Scheifele also performed considerably better than his expected goals, which came in at 20.4 during all situations. His 8.6 differential finished second-highest among all Jets skaters, according to MoneyPuck.com. Additionally, he also registered 2.97 points per 60 minutes, placing him second on the club in that department.
Most notably, Scheifele proved more effective at 5-on-5 in 2021-22 than he had during the last few campaigns. His 17 goals during these situations were the most he’s generated since the 2018-19 season, where he recorded a career-best 20 markers.
The former seventh overall selection from 2011 made a strong contribution on the power play, as well, scoring seven goals and 19 points. He finished third and tied for second on the team in each respective category.
While not a vital metric, Scheifele’s shooting percentage – which had decreased significantly over the previous two seasons – increased by 1.5 per cent in 2021-22, climbing to 18.2 per cent.

Now comes the not-so-fun stuff regarding Scheifele’s 2021-22 season: his defence.
For years, everyone has been well aware of his lack of effectiveness at the other end of the rink. Well, everyone except for Winnipeg’s coaching staff. Heading into his 11th NHL campaign, he hadn’t posted a Corsi For Percentage or a Fenwick For Percentage of 50 per cent or higher at 5-on-5 since 2017-18, according to NaturalStatTrick.com.
Interestingly enough, that dreadful streak came to an end this past season as he finished with a 50.02 per cent CF Percentage and a 50.18 per cent FF Percentage. Having said that, the 6’3″ centre still allowed the opposition to create plenty of quality scoring chances while he was in coverage.
Among all Jets forwards, Scheifele registered the fourth-worst Expected Goals For Percentage (48.3 per cent) and High-Danger Chances For Percentage (44.99 per cent) along with the seventh-worst HD Goals For Percentage (45.76 per cent) during 5-on-5 situations. Obviously, posting these metrics is less than ideal.
Despite providing plenty of offensive upside, Scheifele’s value took a major hit once again due to his poor defensive traits. More often than not, his line was pinned down inside the defensive zone for extended stretches, which is something that’s plagued him in previous years, too.
The Kitchener, Ontario, native also struggled to make clean passes and maintain possession in tight areas, resulting in a career-worst 60 giveaways. He led all Jets forwards in that regard.
Making matters worse, Scheifele suffered a season-ending shoulder injury on Apr. 10 against the Ottawa Senators. The veteran centre experienced a similar injury that limited him to just 60 games in 2017-18. Luckily, this latest one didn’t require surgery.

A very intriguing off-season lies ahead for Scheifele and the Jets. Coming off what was a disappointing season, the offensive-first centre admitted during his year-end press conference that he needs to seriously consider what’s best for his career moving forward.
Understandably, that caused a massive stir amongst the fan base, especially since most of them would probably be in favour of shipping him out via trade. When it comes down to it though, Scheifele can somewhat control his future as his current contract includes a modified no-trade clause, allowing him to submit a list of up to 10 destinations where he can’t be moved.
But at a cap hit of $6.125 million through 2023-24, it might not be difficult to locate a handful of potential trade suitors. Based on the current price of top-six forwards, that’s a fairly reasonable deal, even with his defensive flaws.
Either way, the Jets are expected to make sizeable changes over the next several months, which could very well include parting ways with Scheifele.