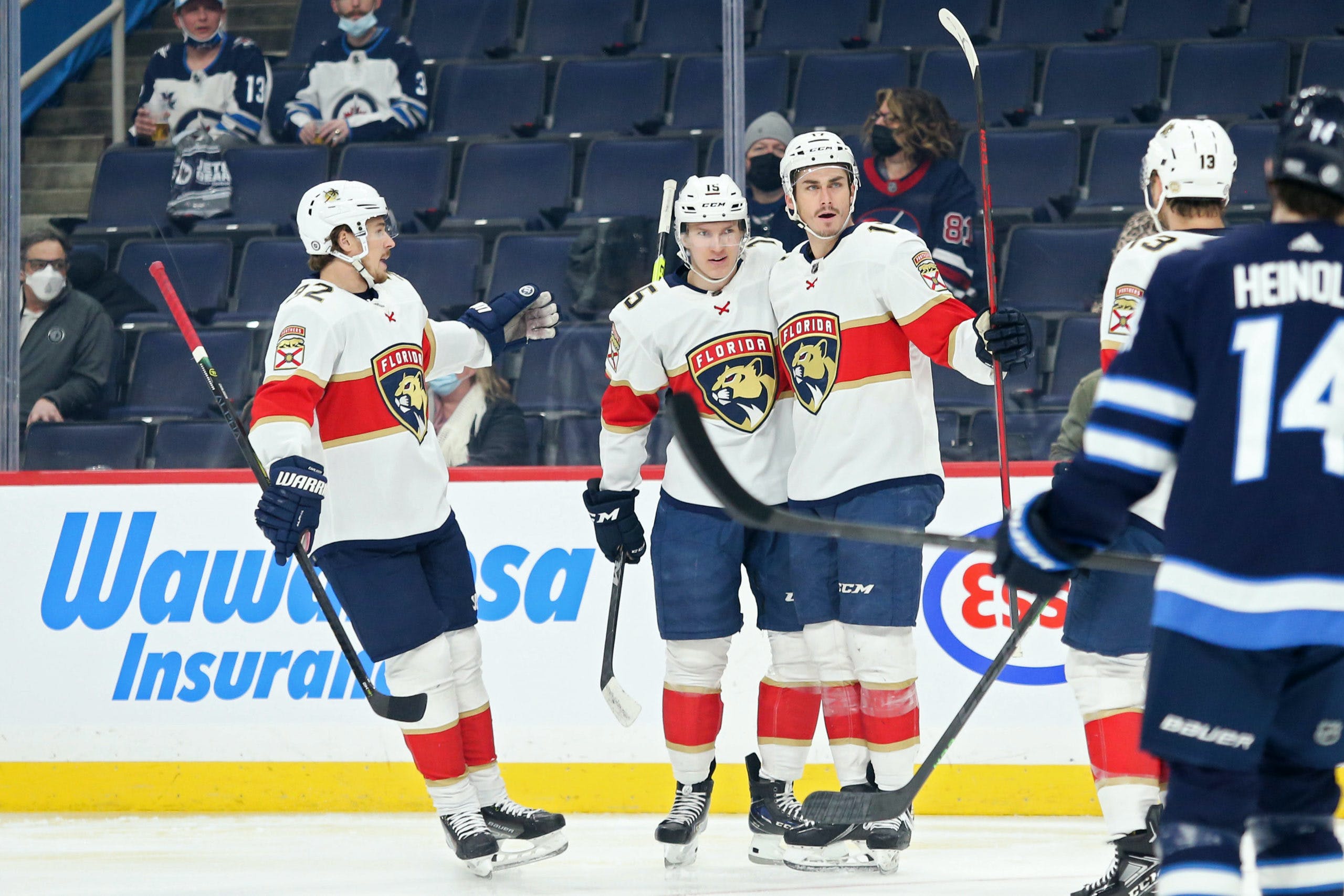 By Thomas Hall
9 months ago
Coming off a miserable four-game road trip, which resulted in four straight losses, the Winnipeg Jets were very pleased to finally come home but they were welcomed with another tough test against the Florida Panthers.
Holding their first game at Canada Life Centre since Dec. 19, with only 250 fans in attendance, the Jets were forced to create their own atmosphere during this contest, luckily, the first 20 minutes of play featured plenty of quality entertainment.
From start to finish, the opening frame was played at an extremely high tempo, which consisted of several end-to-end rushes in transition. In total, these two franchises combined for five goals – including a pair of markers from @Paul Stastny and @Kyle Connor – although it was forward @Mason Marchment’s two-goal effort that was largely responsible for the Panthers’ 3-2 lead after the first period.
Then, as the pace of play calmed in the middle frame, forward @Pierre-Luc Dubois scored on the power play at the 3:30 mark, tying the score at three goals apiece. Unfortunately, Florida answered back over six minutes later, with @Carter Verhaeghe cashing in on a rebound in front to regain his team’s one-goal advantage.
After forward @Sam Bennett notched his 18th goal of the season across the midway point of the third period, he put this one away and ultimately earned the Panthers a well-deserved 5-3 victory.
Digging deeper into this matchup, let’s explore three takeaways from Winnipeg’s fifth straight loss.

Facing off against an elite offence was never going to be easy, however, it became very clear early on the Jets weren’t fully prepared, particularly from a defensive standpoint, prior to puck drop.
Granted, this team was thrown a massive curveball before the pre-game skate as defenceman @Josh Morrissey entered COVID-19 protocols, forcing the coaching staff to reshuffle its defensive pairings. As a result, youngster @Ville Heinola, who hadn’t played at either level since Jan. 8, was thrown into the fire on late notice while skating next to @Nathan Beaulieu.
As most of us witnessed Tuesday, the pairing of Heinola-Beaulieu endured a pretty forgettable performance from start to finish – something almost everyone probably could’ve predicted beforehand. In the end, this duo was on the ice for a pair of goals against, including Marchment’s first of two markers on the night.
While Winnipeg’s bottom pairing didn’t prove reliable, they weren’t alone in that department either as all three pairings experienced some form of defensive lapse throughout the game.
Whether it was @Brenden Dillon and @Nate Schmidt allowing @Anthony Duclair to freely enter the offensive zone on Bennett’s goal, or @Dylan Samberg being tasked to cover two forwards at the side of the net on Verhaeghe’s score, this team just simply didn’t arrive ready for this type of opponent.
Should this entire disappointing effort be blamed on the coaches? No, but the players also need to be held accountable here, as well. Everyone deserves a share of the blame for failing to put up much of a fight against Florida’s offence.

Are there any adjectives left to describe rookie @Cole Perfetti? If there are, they must be found immediately because this 20-year-old isn’t ready to slow down any time soon as he continues to take the NHL by storm.
Despite being held off the score sheet in each of the previous three games, Perfetti broke out massively against the Panthers on Tuesday, registering his first career multi-point performance. Appearing in his ninth NHL contest, the 5’10” forward led the Jets with two primary assists over his 15:58 minutes of ice-time – both of which were highlight moments that caught attention around the league.
Starting with his first career helper, the electric youngster received a perfect outlet pass from Samberg and carried possession into the offensive zone. Once there, the left-hander waited on the wing for a passing lane to open up, as soon as it did, he ushered a cross-ice pass over to Connor, who finished off the sequence by scoring his 23rd of the season.
If that wasn’t impressive enough, Perfetti elevated his craft to another level in the second period, beginning with creating havoc in front of goaltender @Sergei Bobrovsky to draw an interference penalty. With his team trailing 3-2, this was exactly what they needed to level the playing field.
After gaining possession in the attacking zone, the Whitby, Ontario native showcased his stellar patience by making a Panthers’ defender miss and then having the awareness to skate around him before finding Dubois in front. In turn, this lethal duo connected on a beautiful one-timer for a much-needed power-play goal.
Now nine games into his NHL career, Perfetti will burn the first year of his entry-level contract if he plays one more time at this level in 2021-22. But at this rate, there’d be no way to justify sending him back to the AHL other than to deliberately manipulate his service time.

Another Unlucky Goal Against With Connor Hellebuyck Playing the Puck

If goaltender @Connor Hellebuyck has one weakness, without question, it’s puck handling. While it only proves costly the odd time, the 28-year-old has now experienced similar instances in consecutive games.
Last Sunday against the Pittsburgh Penguins, Hellebuyck attempted to fire the puck around his net in hopes of pushing the play towards the opposite side of the defensive zone. Unfortunately, his shot took an awkward bounce off the boards and came around to the other side of his crease, where forward @Jeff Carter took advantage for an easy game-tying goal.
This time around, the two-time All-Star made sure to wire the puck above the boards to avoid another costly mistake, sadly, that’s just what happened. With his shot somehow deflecting off the glass and back towards the slot, Marchment jumped on the loose puck and quickly fired it on net, where it tipped off teammate @Anton Lundell’s leg for the score.
Are these two recent occurrences just a coincidence? Or are they part of a much larger issue at hand? Perhaps being less aggressive with the puck in future games will assist Hellebuyck in correcting these woes.
Uncategorized
Recent articles from Thomas Hall