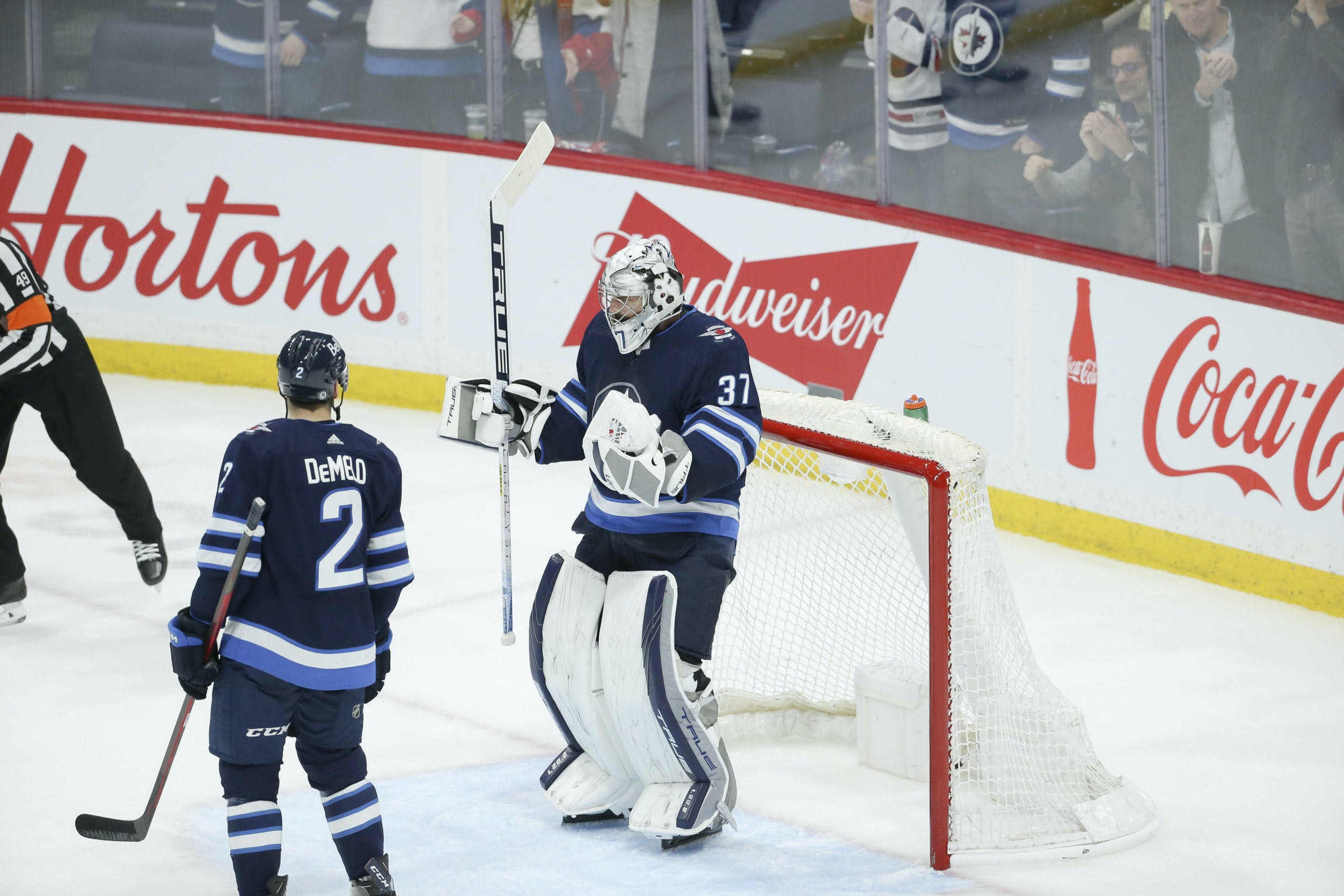 By Thomas Hall
7 months ago
Hockey is a weird sport sometimes.
Even when a team plays well enough to win, that doesn’t always happen. On occasion, an undeserving team can steal a victory thanks to some very favourable bounces, which is precisely what the Winnipeg Jets experienced Tuesday night against the Vegas Golden Knights.
By all accounts, the Golden Knights should’ve been victorious during this highly-anticipated contest, as they were quicker and far more prepared than their opponent. And yet, they ended up allowing four goals without being able to register one of their own.
Despite their best efforts, Vegas’ skaters were held off the scoreboard by goaltender @Connor Hellebuyck, who enjoyed one of his best performances of the season. In the end, the 2019-20 Vezina Trophy winner was rightfully rewarded with his fourth shutout of the season and was named the game’s first star.
Though Winnipeg didn’t receive any help from the Edmonton Oilers, who were defeated by the Dallas Stars, this club enters Wednesday just three points shy of the second wild-card seed. A position that once seemed completely out of reach is now right in front of them.
Digging deeper into this showdown, let’s explore three takeaways from the Jets’ most recent victory over the Golden Knights.

More often than not, most fans have been quick to blame Hellebuyck for allowing a soft goal here and there, but on Tuesday night, he received nothing other than praise for single-handily leading his team to victory.
Frustrating his opponent, the 28-year-old dominated in goal and stopped all 42 shots against, including 10 high-danger saves. In total, Vegas’ skaters were credited with 4.05 expected goals for during all situations, however, none of those chances found their way past the 6’4″ netminder.
Among the numerous saves made, one of Hellebuyck’s most notable ones came while facing a 2-on-1 rush, which saw him travel from post-to-post before extending his right pad to deny forward @William Carrier. Thanks to this stop, and several others, the Commerce, Michigan, native’s teammates were able to breathe easier knowing their goaltender was in the zone once again.
Though that hasn’t always been the case this season, there couldn’t have been a better time for the two-time All-Star to deliver this remarkable showing – if only his defence could’ve provided him with additional support.
While riddled with injuries, the Golden Knights are still a very talented club and if not for Hellebuyck’s stellar showing, the Jets would’ve almost certainly been in shambles, as has been the case for the last several seasons.

There’s no debate, Winnipeg was carried by Hellebuyck throughout this latest contest, although if there’s another skater who also deserves recognition for this victory, it’s forward @Nikolaj Ehlers.
Participating in his 10th game back from injury, the 26-year-old continued his impressive performance as he served as one of the lone sources of offence, particularly in the opening frame. Across the first 20 minutes of play, this team registered a measly four shots on goal – on just eight unblocked shot attempts – with two of those shots coming from the Danish superstar at 4-on-4.
Aside from Ehlers’ net drives, the Jets largely struggled to generate much production inside the offensive zone during the first period, causing fans to voice their displeasure by booing their team off the ice.
Then, in the middle frame, the left-hander helped extend his club’s lead to 2-0 as his point shot was impressively redirected in front by teammate @Mark Scheifele. Scoring a goal of his own, the 6’0″ winger connected with Scheifele on a give-and-go play, which ended with No. 27 tipping home his sixth goal since returning from injury.
In the end, Ehlers finished with another multi-point performance – his eighth of 2021-22 – and extended his current point streak to six games, which has seen him produce six goals and 11 points since Mar. 4.

Even though the Jets ultimately won Tuesday, they certainly didn’t deserve to come away with two crucial points, mainly because of their lack of success early on.
Starting flat out of the gate – a dire problem that’s occurred far too often this season – this team was dominated in possession throughout the opening frame, as the Golden Knights featured a convincing 23-8 advantage in unblocked shot attempts during all situations. Not to mention, they also outshot their opponent 17-4 in shots on goal, too.
As a result, Vegas concluded the first period with a 65.9 per-cent Corsi For Percentage, a 74.2 per-cent Fenwick For Percentage and a 75.4 per-cent Expected Goals For Percentage.
To put it simply, their skaters should’ve found the back of the net at least once, if not more, during the first 20 minutes. Luckily for Winnipeg, Hellebuyck’s strong efforts prevented that from taking place.
After being punched in the face numerous times, not literally, of course, the Jets’ offence finally awoke in the second period as they went on to score four unanswered goals across the remaining 40 minutes of play. But if not for a scoreless first period, the outcome of this showdown likely would’ve been altered.
More from Jets Nation:
Uncategorized
Recent articles from Thomas Hall