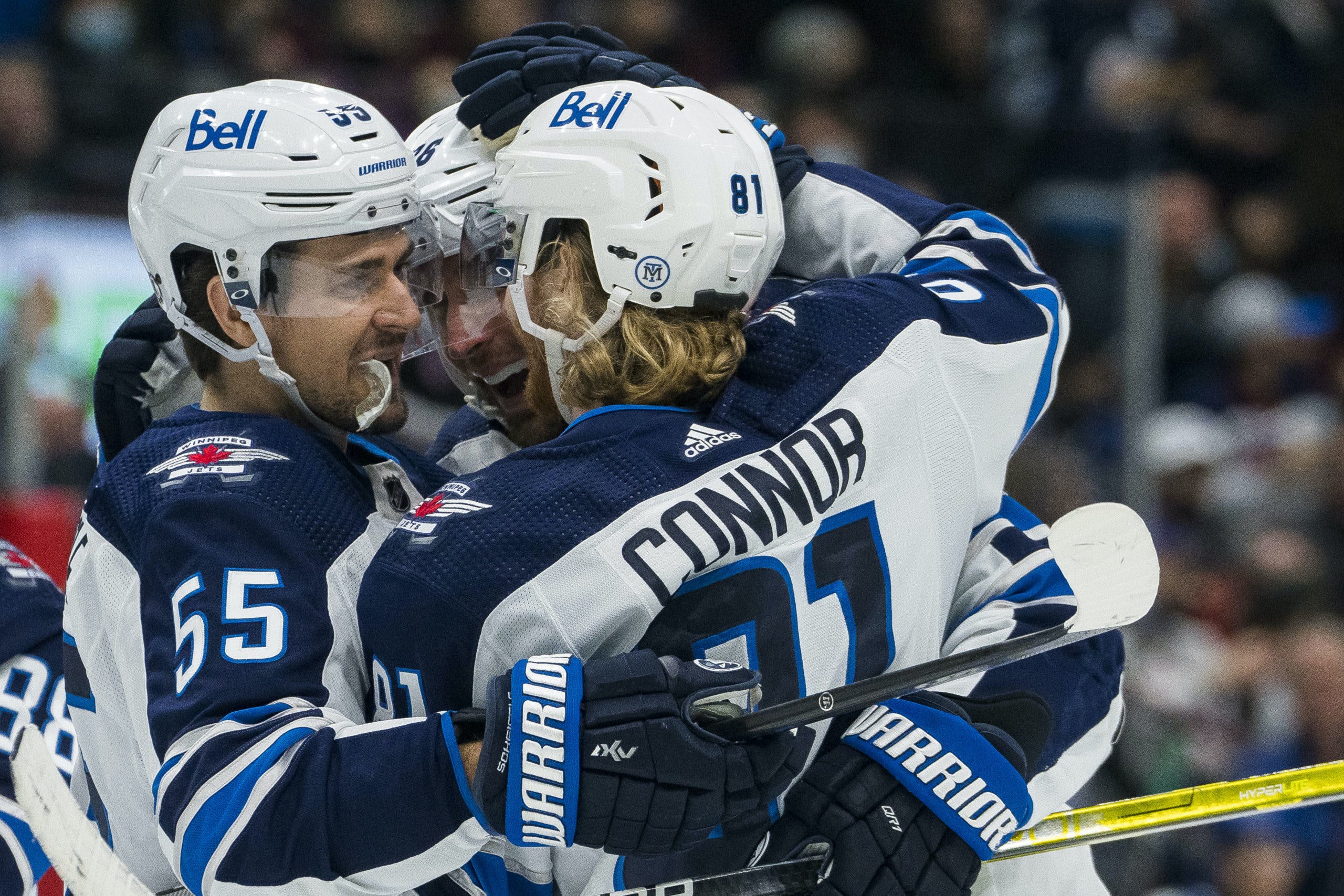 By Thomas Hall
11 months ago
Following a two-week hiatus due to the recent COVID-19 surge, thankfully, the Winnipeg Jets returned to action Sunday as they took on the Vegas Golden Knights for the first time since the 2019-20 season.
Understandably, after being off for an extended length of time, the Jets came out looking pretty rusty and slow in the first period, which saw them fall behind 2-0 through the opening 20 minutes. But thanks to a bounce-back performance in the ensuing 20 minutes, where forwards @Jansen Harkins and @Kristian Reichel (first-career marker) combined for a pair of goals, the score sat at 2-2.
Then, shortly after the final frame began, veteran @Paul Stastny redirected home his eighth goal of the season – his third marker over the last two games – to provide his team with a one-goal edge. Less than two minutes later, while on the power play, @Andrew Copp smacked in his eighth goal of 2021-22, extending his club’s lead to 4-2.
Though it seemed Winnipeg had full control of this contest, unfortunately, everyone was quickly reminded of why two-goal advantages are never safe as the Golden Knights clawed back late in regulation. After two straight goals from @Mattias Janmark – his second came with just nine seconds remaining in the period – this matchup required overtime.
Luckily, @Kyle Connor made his presence felt midway through the extra frame, where he amazingly blew past his defender before firing a wrister past former Jet @Laurent Brossoit for the game-winner.
For an extended recap of this action-packed showdown, here are three takeaways from Winnipeg’s 5-4 victory against Vegas:

With captain @Blake Wheeler out of the line-up, the Jets’ top-six forward group has remained in a state of flux ever since No. 26 hit the shelf with a lower-body injury, however, Harkins certainly did his best effectively fill that void Sunday afternoon.
Paired next to teammates @Pierre-Luc Dubois and Connor, Harkins logged a career-high 16:37 minutes of ice-time and provided his club with a much-needed spark in the second period.
After defenceman @Brenden Dillon recovered a loose puck down low in the offensive zone, he cycled possession along the boards up to the blue line, where the 6’2″ forward was positioned. Once the puck reached his stick, the left-hander skated into the slot and blasted his shot past Brossoit for his third score of the campaign.
In addition to scoring Winnipeg’s first goal, Harkins also set up a golden scoring chance for Connor later in the period, as he backhanded a pass from behind the net over to his wide-open teammate. Despite positioning himself a few feet from the blue paint, No. 81 wired his shot off the post, keeping him scoreless until overtime.
Overall, the former second-round selection finished with one goal, two shots on goal, two high-danger scoring chances, two hits, two blocks and he also drew a penalty as well, according to NaturalStatTrick.com.
It may have been just one game, but for now, it appears Harkins has found a home next to Dubois and Connor.

Heading into this clash in Sin City, Connor had been held off the scoreboard in each of his previous three games, with his last point coming against the Vancouver Canucks back on Dec. 10.
So yeah, the 25-year-old was determined to bust out of his minor offensive drought against the Golden Knights.
Doing just that at the perfect time, Connor casually picked up the loose puck at the blue line and retreated to the neutral zone to regroup before going on the attack once again. At that point, he decked past @Jonathan Marchessault before exploding into the offensive zone with a burst of speed, creating a 2-on-1 rush with @Josh Morrissey on the opposite side.
Rather than taking a chance on a one-timing attempt, the 6’1″ winger opted to shoot the puck himself, wiring his shot under Brossoit’s right arm to earn the Jets their 15th victory of 2021-22.
With Connor’s 19th marker of the season, he’s now tied for the fourth-most goals among all skaters in the league, according to NHL.com. Even better, his third game-winning score of the season now positions him seventh in that department since 2017-18, thanks to his 27 game-ending goals.
But outside of Winnipeg, does the Michigan native receive credit for performing as one of the top goal scorers in the NHL? Not in the slightest.

In what’s been a running theme for seemingly several seasons, the Jets have struggled to hold leads numerous times in the past and, unfortunately, that same issue reared its ugly head once again during this matchup.
Despite controlling a two-goal advantage across the midway mark of the third period, this club experienced some pretty awful luck throughout the final seven minutes of regulation. Needless to say, this served as a very frustrating point of the game for Winnipeg’s fan base.
Starting with Janmark’s first of two goals, defenceman @Zach Whitecloud ushered the puck from his own end into the neutral zone, causing both teams to regroup at centre ice. But with the Jets changing lines, @Dylan DeMelo was the lone defender between him and @Connor Hellebuyck, once he blew a tire near the blue line, the 29-year-old forward was gifted a breakaway opportunity.
Delivering on this scoring chance, Janmark skated in on Hellebuyck and roofed the puck short-side to trim the Golden Knights’ deficit to just one score.
Then with the clock nearing double zeros, the Jets failed to clear the puck out of the defensive zone, allowing their opponent to regain possession along the boards, leading to a cycle back to the point. On the ensuing play, @Shea Theodore blasted the puck towards the net, where @Nicolas Roy deflected it with his stick, later having it bounce off Janmark’s skate and past Hellebuyck.
Sure, Vegas’ comeback ultimately paved the way for Connor’s thrilling game-winner, however, Winnipeg’s continued struggles in the third period remain a very concerning issue in 2022.
Uncategorized
Recent articles from Thomas Hall