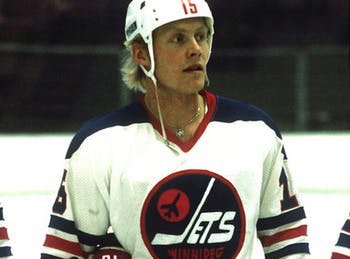 By Craig Jones
1 year ago
On this edition of Friday Folklore, we revisit a feat that is unique to Winnipeg, Anders Hedberg, who was the first player to tally 51 goals in only 49 games. Of course, there will be those that try to diminish the achievement by saying it was in the WHA. But for those fortunate enough to have watched those games, they’ll understand that the physical toll exerted on ‘The Swedish Express’ (Hedberg and Ulf Nilsson), which was the ultimate equalizer to the NHL. Fortunately for both Swedes, they said they’ll never forget the calming words of Bobby Hull – “You don’t have to slash back, hit back, or fight. Just skate and play and think.” Oh, and they did that and so much more.
Maurice Richard may always be synonymous with 50 in 50, but it only took 22 years for Hedberg to break the less-than-50 mark. It’s amazing that people forget that the Örnsköldsvik native did it in the most classic hockey way. Hedberg entered the 49th game of the Jets’ season with 48 goals and, unfortunately for the Calgary Cowboys’ goalie Gary Bromely, was determined to get 50. The Swedish winger netted home his 49th early. What makes this feat even more amazing is that he got absolutely rocked with a huge hip-check from defenseman Paul Terbenche that left him sporting a cast with a knee injury after the game. Yup, he popped in two more after that devastating hit, proving too many naysayers that say Europeans were softer than North American players and, because of the challenges they had endured, they were actually tougher.
This toughness propelled Hedberg to not only be the first player to break the less-than-50 mark, but to end the season with an unworldly 70 goals in 68 games. This helped lead his team to the 1976-77 AVCO finals. Unfortunately, they fell short and lost in Game 7 against the Québec Nordiques but, as the Swedish warrior famously said, “They’ll see Richard, they’ll see Hull in the record books, but they’ll still ask, who’s that Hedberg?” Well, I think it’s safe to say that they’ll always know that Hedberg in the ‘Peg.
Hedberg will always be first but, like all records, they are meant to be broken. Luckily, the Swede was amongst some prettttttttttttty prestigious company. Mike Bossy matched Richard in the 1980-81 season with 50-in-50 and it wasn’t until the “Great One” burst onto the scene that Hedberg’s solo reign on top came to an end. Wayne Gretzky tallied 50 in 39 during the 1981-82 season, 50 in 42 in the 1983-84 season, and 50 in 49 in the 1984-85 season. Super Mario Lemieux joined the exclusive club in the 1988-89 season with 50 in 46 and Brett Hull was the last entrant with 50 in 49 during the 1990-91 season.
It’s both fitting and beautiful that one of the most legendary feats in sports happened in the ‘Peg. The passion for hockey in the Manitoba capital is second-to-none, so having Hedberg as the first to break the less-than-50 mark and Teemu Selänne set the rookie-scoring record is just the way it should be. Jets fans can only hope that a few more records can be established. Maybe this could even mean they’ll be the first Canadian team to raise the Cup in the new millennium? I’ve got a feeling that’s the record every Jets fan wants in the record books.
Twitter:@Jonesinthezone
IG:@Jonesinthezone
Uncategorized
Recent articles from Craig Jones