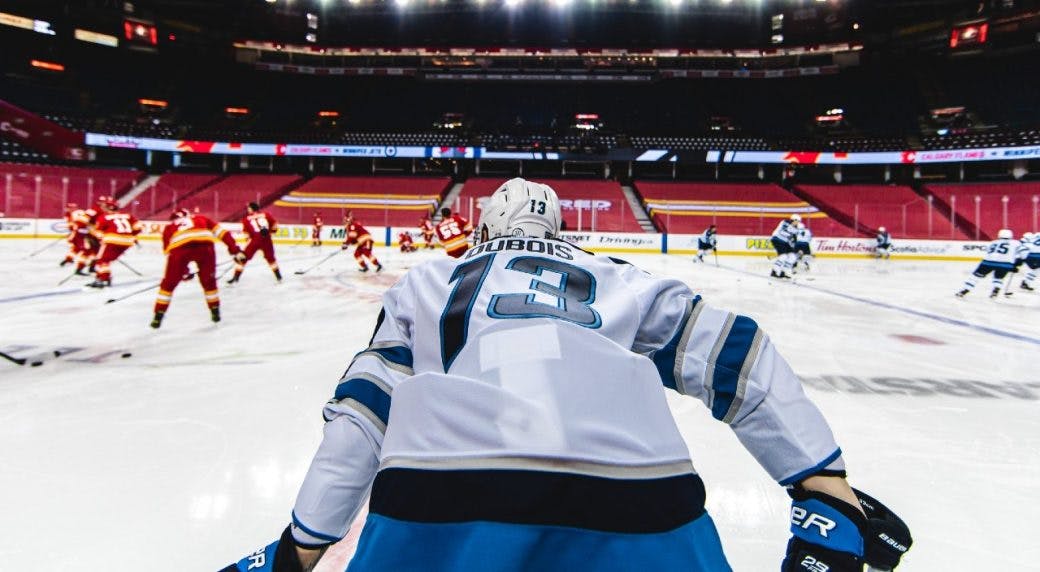 By Thomas Hall
1 year ago
After being acquired by the Winnipeg Jets on Jan. 23, forward @Pierre-Luc Dubois was forced to quarantine for 14 days and then he suffered a lower-body injury after just two games with his new team. But now that he’s healthy once again, things are finally starting to trend in the right direction for the 22-year-old.
While this unfortunate injury forced Dubois to miss four straight games, he was finally cleared to return on Sunday against the Vancouver Canucks and the youngster certainly didn’t disappoint, as he scored two goals and three points – including the game-winner in overtime. Even though this was just his third game in a month, this type of stellar performance was certainly worth the wait and everyone is hopeful it’ll be the first of many game-changing outings.
Considering the former Columbus Blue Jacket has missed so much time, adjusting to a new system and applying those tendencies on the ice has understandably been a little challenging up to this point. But with the help of the club’s coaching staff and his new teammates, the 6′ 3″ forward has picked things up fairly quickly and believes it won’t be long before he feels completely comfortable with all of their schemes.
“We watched a lot of video when I was in quarantine,” Dubois discussed. “It’s not the same as being on the ice, but we played close attention to details of the game – the neutral zone, the D-zone, the offensive zone is more reads and just getting comfortable. The guys have been really great too, communicating with me on the ice, on the bench, showing me clips on the iPad. But I’m feeling more and more comfortable and I’m almost at the point where it feels natural when I get out there.”
In an effort to limit Dubois’ workload during his return, coach Paul Maurice decided to move him to the wing and position the left-hander on the top line alongside teammates @Mark Scheifele and @Blake Wheeler. Though his natural position is at center, making this move helped ease the former first-round pick back into action and it also kept him a lot fresher during the later stages of Sunday’s game.
“I think it’s definitely less taxing on the body as a winger and I think I felt that a bit [during] that Vancouver game,” Dubois explained. “I felt a lot better than I did the first game coming back, but I had a lot of practices too – a lot of skating – so that also probably helped. I think playing wing definitely eases the load physically when you’re coming back into the lineup.”
Through three games with the Jets, Dubois has averaged 15:48 minutes of ice time per game, producing two goals, three points, three hits, two shots on net, one block and a 40.0% faceoff percentage.
In comparison, the Quebec native averaged just 14:31 minutes of ice time per game, creating just one goal, seven shots on net, three blocks, two hits and a 54.1% faceoff percentage during five games with the Blue Jackets earlier this season.
Since Winnipeg’s newly former top line performed extremely well against the Canucks, it seems Maurice will continue rolling with the trio of Dubois, Scheifele and Wheeler for a little bit longer. While it’d probably make sense to move the young superstar back to center sometime soon, the left-handed forward isn’t worried about where he lines up and is just focused on continuing to help his team win in whatever way possible.
“I don’t know exactly how long I’ll be there,” Dubois detailed. “If, hopefully, we keep having good games and maybe I stay there for the rest of the year. Who knows? But, I mean, to me it doesn’t matter. We have so much depth, so many good players on this team that whether you’re left wing, right wing, or center on any line you’re in a good spot.”
Jets News
Recent articles from Thomas Hall