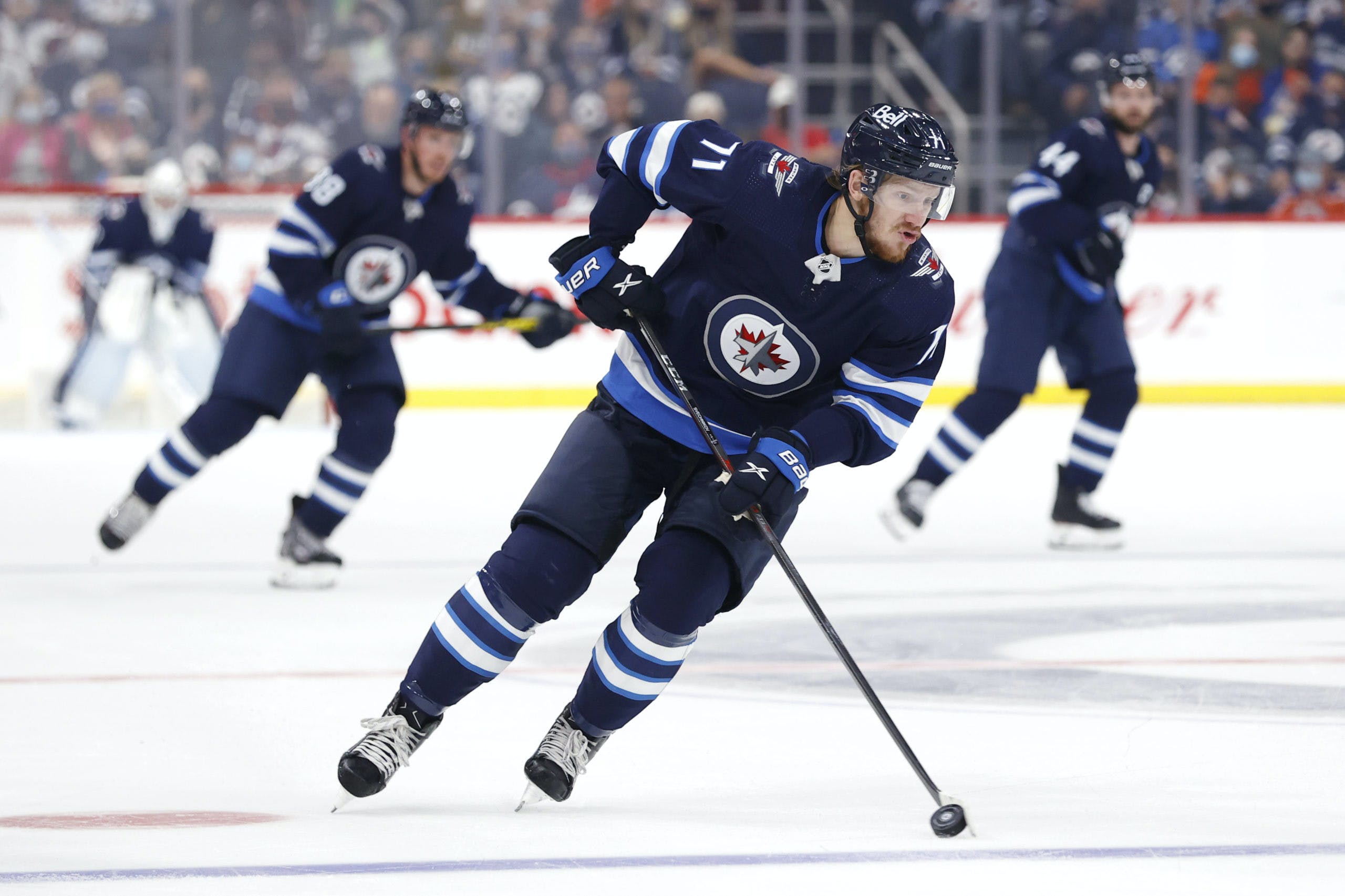 By Thomas Hall
1 year ago
Coming off an overtime loss at the hands of the Ottawa Senators in the pre-season opener, the Winnipeg Jets were back in action Wednesday night as they faced off against the Edmonton Oilers, who didn’t exactly field their most competitive roster.
Since the Oilers played the night before against the Seattle Kraken, they decided to rest almost all of their regulars, meaning they called upon top young prospects and fringe NHL skaters in this matchup. As a result, the Jets were essentially tasked with competing against the Bakersfield Condors – the Oilers’ AHL affiliate – which they certainly used to their advantage during this first meeting since the 2021 Stanley Cup Playoffs.
Witnessing a similar outcome to that first-round showdown, Winnipeg came away victorious in this exhibition affair, thanks to a 5-1 result. While wins and losses don’t hold any value during this time of the year, earning the first victory of the pre-season is still something to be proud of, especially when it comes against a fellow Canadian franchise.
In turn, let’s take a look at what stood out during this second exhibition game of the 2021-22 campaign.

Appearing in his second game of the pre-season, it’s probably safe to say this contest went enormously better than the first for forward @Evgeny Svechnikov, as he served as one of the top-performing skaters through 60 minutes.
Despite only receiving 10:27 minutes of ice time, Svechnikov made the most of every shift he earned, which resulted in one goal, three points, five shots on goal, three high-danger scoring chances and one rebound created, according to NaturalStatTrick.com.
Without question, the 24-year-old was easily one of the most impactful skaters on the ice for either team on Wednesday, thanks in part to his remarkable showing in the offensive zone. Starting in the first period, the former Detroit Red Wing drove to the front of the net multiple times, one of which allowed linemate @Jansen Harkins to score on his rebound attempt.
Then in the middle frame, Svechnikov was able to deflect defenceman @Logan Stanley’s blast from the point, which found its way into the back of the net for his first goal of the pre-season. Later in the period, the 6’3″ winger helped create a line rush into the offensive zone, where he sprung Harkins on a breakaway that led to the Jets’ fourth goal of the contest.
While there are still four exhibition games remaining, it’s becoming pretty clear that Svechnikov could provide some upside in a bottom-six role in 2021-22, whether that’s during five-on-five or penalty-killing situations. So he may not need to continue performing on his professional tryout contract for much longer.

Along with Svechnikov, Harkins also thrived on Winnipeg’s third line during this matchup against Edmonton, making for his best offensive showing of the pre-season yet.
After recording a primary assist in the first exhibition game against Ottawa, the 24-year-old posted a pair of goals, a secondary assist, four shots on goal, three high-danger chances, three hits and one rebound created over his 12:10 minutes of ice time. Additionally, he also won one of his two faceoff opportunities as well.
Featured alongside prospect @Cole Perfetti and Svechnikov, this trio led the way for the Jets in this second pre-season contest, particularly from an offensive standpoint. Though it remains to be seen if they’ll remain together moving forward, they certainly displayed plenty of chemistry through one contest and probably warrant additional time together through the rest of camp.
Now with four points in two games, Harkins is definitely off to a strong start, and considering he’s projected to earn a spot on the club’s fourth line, it seems the left-hander is on track to do exactly that, at least, as of right now.

Michael Eyssimont Putting Himself on the Map

While forward @Michael Eyssimont probably isn’t someone most fans were aware of prior to Wednesday night’s matchup, the 25-year-old certainly did his best to change that narrative as he made a solid first impression against the Oilers.
Suiting up for his first pre-season action of the year, Eyssimont occupied a spot alongside @David Gustafsson and @Austin Poganski, finishing with a team-high seven scoring chances, four shots on goal, two high-danger chances, two rebounds created, one hit and a primary assist over his 10:10 minutes of ice time.
Leading the charge on the Jets’ third goal of the game, the former fifth-round selection received a stretch pass from defenceman @Ville Heinola and proceeded into the offensive zone for a scoring attempt. While his initial shot was denied by Oilers goaltender, @Ilya Konovalov, the puck ultimately bounced off Poganski’s body for the score.
Though this was his only marker of the contest, that didn’t stop Eyssimont from attempting to extend his team’s lead even further, as he recorded the second-highest xG rate (0.47) among all Winnipeg skaters during five-on-five play.
Granted, Eyssimont still likely remains on the outside for one of the final roster spots, although he could improve his chances of breaking camp with the Jets if he continues to showcase his ability to drive hard to the net through the rest of the pre-season.
Uncategorized
Recent articles from Thomas Hall