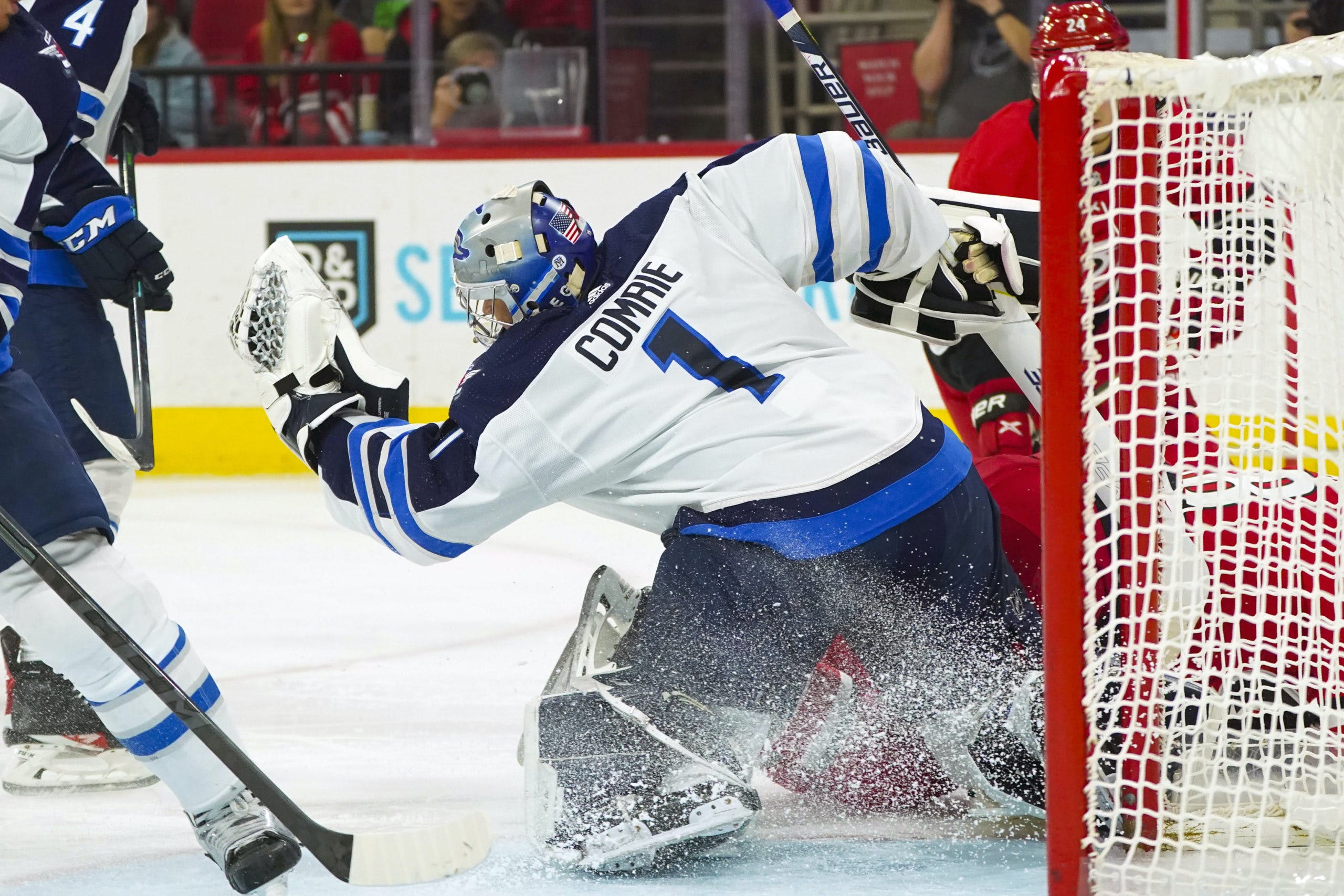 By Colton Davies
7 months ago
Have the Winnipeg Jets found their back-up goaltender for the foreseeable future? I believe @Eric Comrie could be the answer.
After Apr. 22’s 4-2 loss to the Carolina Hurricanes, that saw Comrie stop 42 of his 45 shots against, he now possesses an 8-5-1 record, a 2.72 goals-against-average (GAA) and a .915 save percentage (SV%). The 2013 second-round pick has been a work in progress over the years, but his development has started to pan out this season.
On Thursday, the Jets opened the scoring in the first period with none other than @Kyle Connor, who put home his 44th goal of the season, courtesy of a backdoor pass from @Pierre-Luc Dubois. Connor continues to be lethal in the goal column and with seven games left, he needs just six goals to join the 50-goal club this season.
Dubois ended up scoring later on in the opening frame, he’s now tied his career-high in goals (27), which he set back in 2018-19. With 58 points on the season, he’s just three points away from setting a new career-high in points, as well.
The 2021-22 season has been very kind to both skaters, respectively.
Comrie continued to stay busy during the second period, though, and Hurricanes forward @Teuvo Terravainen picked up the lone goal for his 20th of the season. Winnipeg’s netminder faced his biggest challenge throughout the third as Carolina’s skaters came roaring. He remained calm and poised but ultimately, @Jaccob Slavin scored on a rebound from @Andrei Svechnikov, tying the score at 2-2.
But then, an awkward play ensued that led to some frustration as Winnipeg native @Seth Jarvis made it a 3-2 game. A blast from Brendan Smith bounced off Comrie’s mask, causing it to become dislodged before falling off his head. During the action, Jarvis managed to grab the rebound and shovel the puck home to score his 15th goal of the campaign.
With Jets players and interim coach Dave Lowry questioning and later challenging the goal, a replay review ultimately deemed it a good goal and the game went on. The NHL rulebook states, “When a goalie has lost his helmet and his team has control of the puck, the play shall be stopped immediately to allow the goalkeeper the opportunity to regain his helmet. When the opposing team has control of the puck, play shall only be stopped if there is no immediate and impending scoring opportunity.” Comrie later addressed the situation in a classy manner during his post-game presser.
With @Connor Hellebuyck being the elite goaltender he is, the 28-year-old has been a great mentor for Comrie thus far and could continue to serve in that role next season. Some goalies take a bit of time to fully come out of their shells, not all of them can be like @Marc-Andre Fleury, @Andrei Vasilevskiy or Hellebuyck, some require additional development before finding their rhythm.
Comrie has bounced around throughout his time in the NHL but this season, he seems to have solidified his role. According to PuckPedia, Comrie is a restricted free agent with arbitration rights at season’s end. Right now, it’d probably be in the Jets’ best interest to re-sign him to a multi-year deal.
The journeyman has all the intangibles to emerge into a legitimate starting goaltender someday, of course, if given the chance to thrive in the right surroundings. Hopefully, that’s in Winnipeg.