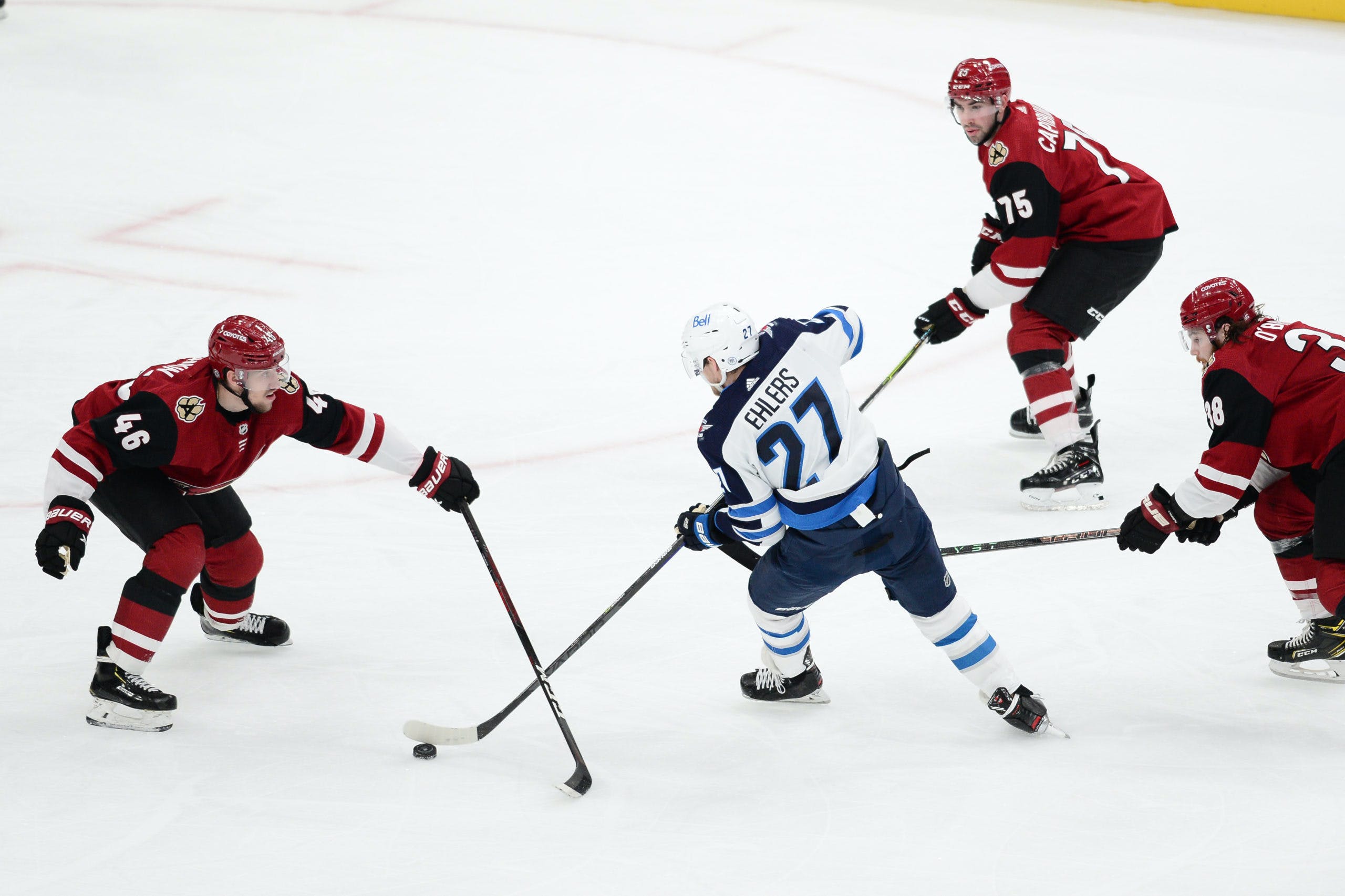 By Thomas Hall
8 months ago
In an overtime thriller, the Winnipeg Jets defeated the Columbus Blue Jackets 4-3 back on Friday and they’ll be looking to build off that momentum Sunday against the Arizona Coyotes.
As unlikely as it may seem, these rebuilding Coyotes have been somewhat of a nuisance to the Jets this season, as they’ve proven difficult at times in each of the three previous meetings. The first of which was dominated by rookie goaltender @Karel Vejmelka, who earned his first career NHL shutout via a 1-0 victory.
Thankfully, however, Winnipeg has won the last two bouts against Arizona, registering a +4 goal differential during that span. Considering this team’s playoff hopes are on very thin ice, it’ll be critical to capture a third consecutive victory while facing this opponent, which would bring them to 74 points on the campaign.
In what’ll be the final matchup of 2021-22 between these two franchises, here are three skaters to watch ahead of puck drop:

Last Game: One goal (OT winner), two shots, 15:07 minutes
Despite his limited ice-time last game, forward @Nikolaj Ehlers was called upon for the perfect occasion, scoring the overtime winner against Columbus. Now, he’ll attempt to remain a driving offensive force during Sunday’s tilt versus Arizona.
Positioned on Winnipeg’s top forward line, Ehlers has largely carried his linemates, @Mark Scheifele and @Paul Stastny, ever since joining this group a few games ago. Expanding on his impressive stretch, he’s also remained red-hot since returning from injury on Mar. 4, resulting in seven goals – six at even-strength – and 12 points across his last 12 contests.
By all accounts, the 26-year-old is currently performing as one of the Jets’ most productive skaters, especially from an offensive standpoint. If his team is to be victorious, chances are he’ll be heavily involved once again.

Last Game: One secondary assist, three shots, 22:28 minutes
Far too often, Winnipeg’s coaching staff has over-relied upon the outdated connection between captain @Blake Wheeler and Scheifele, which has been a key factor responsible for this season’s disappointing results.
But now that they’re separated, the 35-year-old winger has displayed some encouraging signs while paired next to centre @Pierre-Luc Dubois. All season long, the former Blue Jacket has been extremely effective at enhancing his linemates’ performances, and that’s precisely what he did for Wheeler last game.
Though his lone assist came on the power play, Wheeler connected with Dubois during a couple of golden scoring chances at 5-on-5, as well. While none of them found the back of the net, it was certainly promising to watch these two forwards create instant chemistry together.
Let’s hope this duo – along with @Kyle Connor – can enjoy plenty of success against the Coyotes.

Last Game (Feb. 14): One secondary assist, two hits, one block, 16:06 minutes
Life in the NHL has been challenging for defenceman @Ville Heinola, to say the least.
Across three seasons, the 21-year-old is yet to play more than 21 career games – including just eight in 2021-22. Making matters worse, he hasn’t appeared in a single game at any level since Mar. 16, as the young blueliner has spent most of his time as an emergency call-up recently.
With fellow defenceman @Logan Stanley currently battling an injury, while also coming off a pair of miserable performances, Heinola is finally set to return to action Sunday. He won’t be paired next to @Neal Pionk, which has been a successful duo in previous contests, although the left-hander will look to make an impact on the club’s bottom pairing with @Nate Schmidt.
More from Jets Nation:
Uncategorized
Recent articles from Thomas Hall