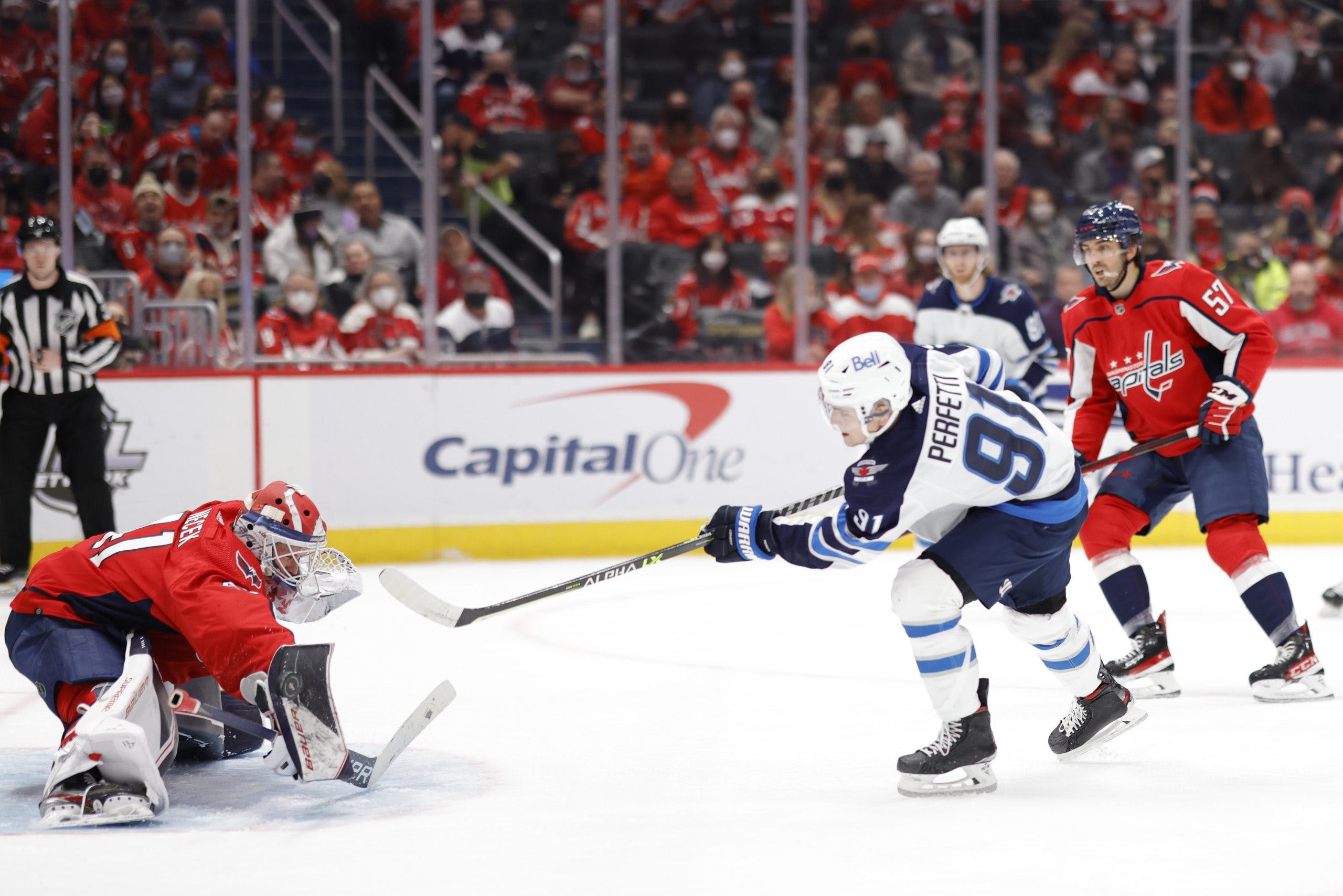 By Thomas Hall
10 months ago
Continuing their seemingly month-long road trip, the Winnipeg Jets headed into Washington to take on the Capitals and while things fell their way early on, the overall result certainly proved disappointing as they were served with an overtime defeat.
Less than three minutes into the opening frame, the Jets came out firing and jumped out to an early 2-0 lead, thanks to a pair of goals from forwards @Kyle Connor and @Cole Perfetti. While it seemed like this team would enter the first intermission with a two-goal edge, however, the great @Alex Ovechkin entered the chat and fired home his 27th marker on the season.
Then, with Winnipeg leading 2-1 early in the second period, defenceman @Dmitry Orlov wristed a shot from the point that somehow found its way through several bodies in front and past goaltender @Connor Hellebuyck’s glove, tying the score at two apiece.
Following a go-ahead goal from @Aliaksei Protas, Washington had officially turned the tables in the third period, controlling a 3-2 lead until the final minute of regulation. At that point, with Hellebuyck pulled for an extra attacker, @Adam Lowry jumped on the loose rebound from @Mark Scheifele’s one-timing attempt and sent the puck in front of the net, where @Pierre-Luc Dubois tapped it in for the game-tying score.
Despite this comeback effort, which forced overtime, the momentum quickly swung in the opposite direction in the extra frame, as @Tom Wilson took advantage of the Jets’ poor positioning in front of their own net, leaving him all alone to smack home the game-winner just 26 seconds in.
For an extended recap of this matchup, here are three takeaways from Winnipeg’s 4-3 defeat against Washington:

After missing last game due to COVID-19, forward @Nikolaj Ehlers returned to the Jets’ line-up Tuesday and was reunited with the top line of @Andrew Copp and Scheifele.
Though this team certainly missed his electric presence on the ice, unfortunately, that’s likely something they’ll have to adjust to moving forward as the 25-year-old suffered a significant knee injury during the late stages of this contest.
With Ehlers looking to cycle the puck in the offensive zone, Orlov was determined to break up that pass attempt, but after missing on his poke check, he collided with the Danish star’s knee. Despite possessing the necessary requirements to call a kneeing penalty, no whistle was ever blown, understandably, causing a serious amount of frustration on Winnipeg’s bench.
You be the judge, should there have been a penalty called here? And how many games, if any, would you suspend Orlov for?
Before Ehlers left the game, the explosive left-hander was enjoying a fairly strong performance in his first game back from the COVID list. Even though he didn’t register a single point or a shot on goal, No. 27 impacted the game in other ways, which saw him draw a pair of penalties – he should’ve added one more to that total – one of them resulted in a power-play marker for Connor.
As of now, the former first-round selection has already been ruled out for Thursday’s tilt against the Nashville Predators and he’ll most likely be sidelined beyond that point, as well.
Let’s just hope this injury isn’t the season-ending kind as that’d be a crushing blow for this franchise.

Similar to Ehlers, defenceman @Logan Stanley was making his return to the line-up following a battle with COVID-19, and hadn’t appeared in game action for over a week.
With that in mind, it was reasonable for the 23-year-old to experience some rust during this contest, however, his performance – along with linemate @Nate Schmidt’s – significantly helped the Capitals secure their second victory in 2022.
Beginning with Washington’s opening marker, Stanley got lost in coverage inside the defensive zone, leaving Ovechkin by himself on the left wing. Making Winnipeg pay for this costly mistake, the future Hall-of-Famer blasted the puck home for the score, passing Edmonton Oilers forward @Leon Draisaitl for the league lead in goals (27).
Then in the third period, this pairing endured a very unlucky series of events leading to Protas’ goal, as a wraparound attempt deflected off Schmidt’s skate and Hellebuyck’s pad before crossing the red line.
Diving into the advanced metrics, in addition to being on the ice for two goals against, this duo each registered a Corsi For Percentage and a Fenwick For Percentage of 30 per cent or worse at 5-on-5, according to NaturalStatTrick.com. Additionally, both defenders earned an Expected Goals For Percentage of 32 per cent or lower during those same situations.
Based on these troubling results, it wouldn’t be shocking to see interim coach Dave Lowry shake up his bottom defensive pairing ahead of Thursday’s contest.

Appearing in his third straight NHL game, the Jets were hoping for big things from their second line of Connor-Dubois-Perfetti in this matchup, and the rookie skater didn’t disappoint against the Capitals.
Coming into the night, the 20-year-old forward had yet to register a single point at the highest level of competition, but on Tuesday night, all of that changed for the better. Just over a minute after Connor had provided his team with a 1-0 lead, the top young skater extended that edge with a goal of his own – one that required a double-take before he could believe it went in.
As witnessed in the clip above, Stanley’s stretch pass sprung Dubois and Perfetti on a 2-on-1 rush the other way, ultimately resulting in a wicked wrister for the 5’10” youngster. While this was only one play, it served as another example of how it’s becoming more challenging each day to justify sending the former first-round pick back to the minors.
At this rate, playing alongside two of the game’s top forwards, Connor and Dubois, might just be the best thing for Perfetti’s development moving forward.
Uncategorized
Recent articles from Thomas Hall