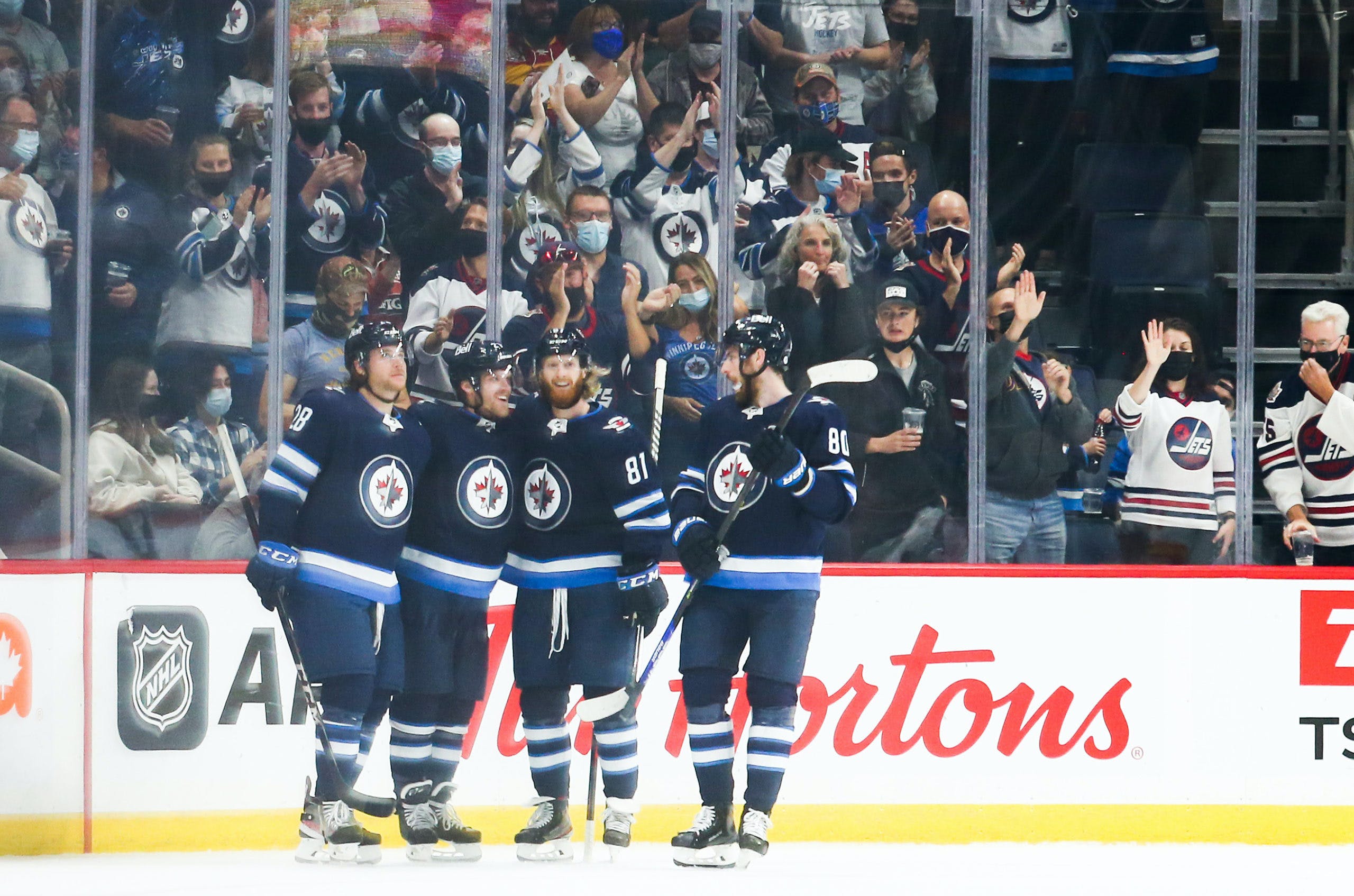 By Thomas Hall
1 year ago
Then there were two… remaining pre-season games that is. Nearing the start of the 2021-22 regular season, all that was left on the exhibition schedule for the Winnipeg Jets was a home-and-home against the Calgary Flames, which began Wednesday night.
After significantly trimming their roster on Monday, leaving just 28 skaters in camp, Winnipeg hit the ice for its final pre-season contest at Canada Life Centre looking to provide their loyal fans with a quality performance. Doing just that, this club took an early 2-0 lead in the opening frame and controlled the flow of the game into the second period.
But once Flames forward @Blake Coleman hit a defenceless @Jansen Harkins from behind midway through the middle period, all the focus immediately shifted for the Jets, which ultimately allowed their opponent to claw back into this game. Luckily, a crucial power-play marker from @Nikolaj Ehlers broke a 2-2 tie in the third period, earning his team a well-deserved victory.
As for what stood out during this pre-season affair, here are three takeaways from Winnipeg’s second exhibition win in 2021:

There are seemingly three constants in life for Jets fans right now: Death, taxes and watching Ehlers overpower opposing defences with his superstar talents.
Coming as no surprise to anyone, the 25-year-old led the charge for the Jets in their 3-2 victory over the Flames on Wednesday, which saw him score a pair of goals while also finishing with a team-leading seven shots on goal.
Potting his first marker of the contest in the opening frame, Ehlers displayed his lightning-fast quickness by exploding through the neutral zone, forcing Calgary’s defenders to drop back into the defensive zone. Then shortly after crossing over the blue line, the left-hander wired a shot past goaltender @Daniel Vladar for the score.
As for his second goal, with the Jets on a power play midway through the third period, they desperately needed to recapture some of the momentum they had lost, and wouldn’t you know it, the former first-round pick helped them accomplish that feat. Thanks to some impressive puck control from defencemen @Josh Morrissey and @Nate Schmidt, Ehlers received an open shooting lane that allowed him to wire another shot past Vladar.
Even more notable than scoring a pair of goals, the Danish forward showcased his remarkable playmaking ability by sending a spectacular backhand pass cross-ice to @Nathan Beaulieu, providing the veteran blueliner with a quality scoring chance – that’s no small achievement.
Aside from going 0-for-3 in his attempts to earn a hat trick, technically he was 0-for-4 if you include the botched last-second passing attempt from @Andrew Copp, Ehlers enjoyed another stellar showing and continued to prove he’s ready for meaningful games to begin.

One of the coaching staff’s main goals in training camp was for the new additions on defence to create strong relationships with their teammates, and with less than one week until the 2021-22 season opener, it’s safe to say Morrissey and Schmidt are on their way to accomplish that.
Though this duo has been together for just three weeks, they seemingly haven’t endured any issues creating plenty of chemistry together, which was on full display Wednesday night. On numerous occasions, this pairing showcased its effective communication skills as when one of them decided to join the rush, the other knew to stay back and cover any play that headed back into the neutral zone.
Case in point, after Morrissey received a pass from @Adam Lowry at the top of the offensive zone, the 26-year-old defenceman surged into the slot before opening the scoring for the Jets. During that time, Schmidt was seen skating back towards the neutral zone in case the puck suddenly travelled the other way.
With the man advantage, these two blueliners remained paired together on the second power-play unit, allowing them to control pace of play in the offensive zone multiple times. As a result, they combined to generate one assist, four shots on goal, four scoring chances and one rebound, according to NaturalStatTrick.com.
While they still have some room to improve defensively, especially during 6-on-5 situations, all signs appear to be pointing upwards for Morrissey and Schmidt nearing the conclusion of the pre-season.

Throughout this year’s training camp, there’s been much debate regarding which skater would ultimately play alongside Copp and Lowry to begin the regular season. Well, it seems @Kristian Vesalainen is currently leading that competition as he looks to carve out a regular role in the NHL.
For the most part, Vesalainen had yet to make a strong impression during exhibition action prior to Wednesday’s tilt against the Flames. But with time running out to secure his spot on the Jets’ third line, the 22-year-old certainly didn’t disappoint over his 14:35 minutes of ice time.
Even though the former first-round selection failed to crack the score sheet, it wasn’t due to a lack of effort, as he finished tied for the team lead in scoring chances (four) while also recording the most high-danger chances (two) and the highest individual expected goals rate (0.45) at 5-on-5. Additionally, he also posted three shots on goal, two hits, two blocks, one hit and drew a pair of penalties as well.
In particular, Vesalainen helped set up Winnipeg’s first marker of the contest, which saw him beat two defenders to the puck in the offensive zone, leaving Lowry to jump on the loose puck. On the ensuing play, the veteran center passed the puck up to Morrissey, who wired a shot for the team’s opening goal.
With just one pre-season game remaining, it’ll be crucial for Vesalainen to prove once again he’s capable of making an offensive impact in a much larger role than he’s ever occupied previously in his young career.
Uncategorized
Recent articles from Thomas Hall