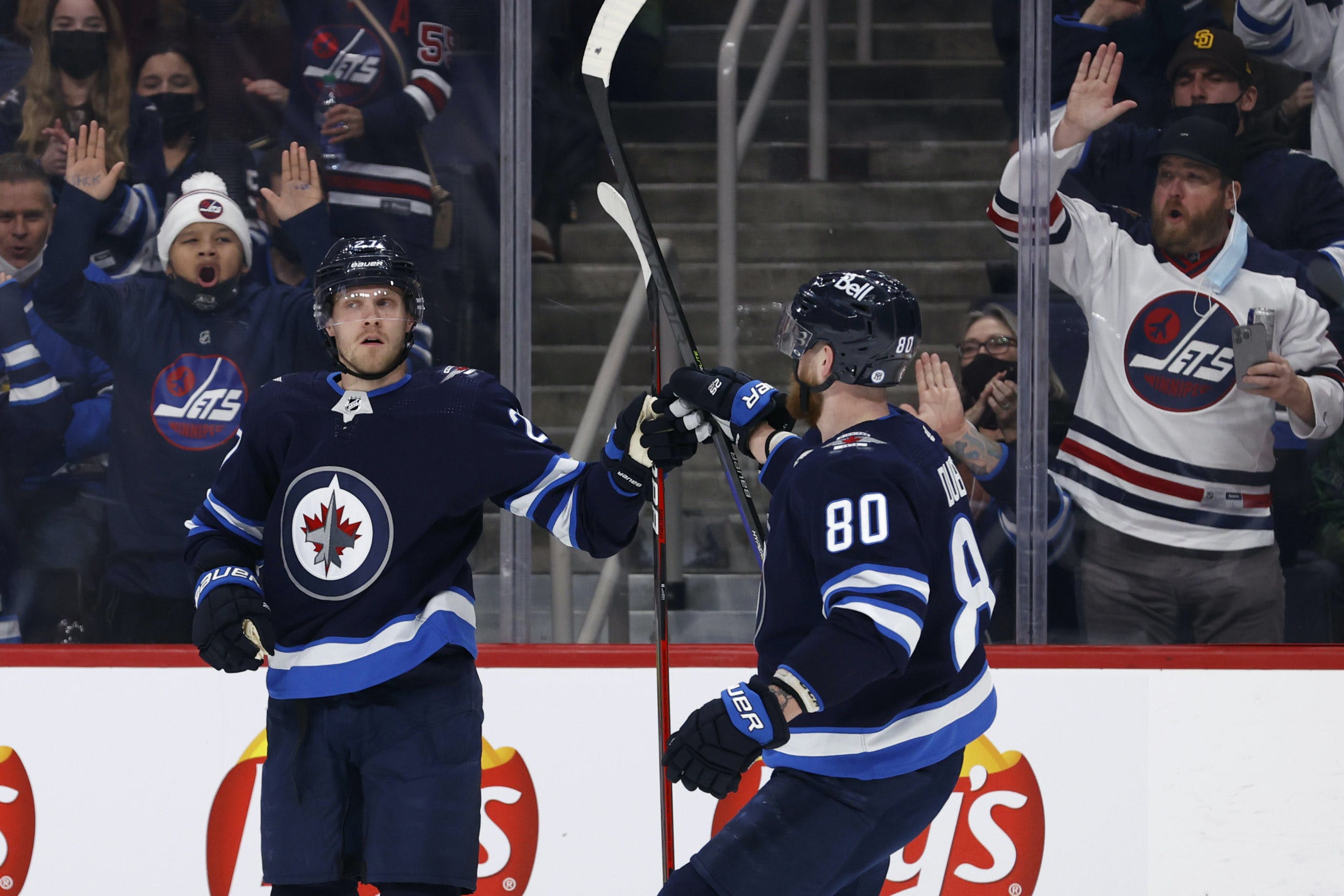 By Thomas Hall
9 months ago
Just two days after dropping another winnable contest to the Dallas Stars, the Winnipeg Jets remain desperate to gain as many wins as possible and will be looking to earn two points in the standings when they welcome the New York Rangers to Canada Life Centre on Sunday.
Sadly, Winnipeg’s upcoming schedule isn’t about to become any easier as this club will finish its current four-game homestand against New York and Tampa Bay. Since both of these opponents are elite championship contenders in the East, earning just a pair of points during this span will likely be extremely difficult.
With only 27 games remaining in the regular season, 26 following Sunday’s matchup, this team is almost out of runway to salvage their playoff hopes, which currently places them seven points behind the second wild-card seed.
Hoping to keep pace with the rest of the competition, let’s explore three skaters to watch ahead of this showdown between the Jets and Rangers.

Last Game: One assist, six shots, 16:04 minutes
Returning from his month-plus absence Friday, forward @Nikolaj Ehlers put on an impressive showing against the Stars, serving as a much-needed spark plug for this group, and will need to do so once again during his second game back from injury.
Despite being featured on Winnipeg’s third line – a role he isn’t expected to occupy for very long – the 26-year-old didn’t seem to have missed a single beat while facing Dallas. Though he finished the night with just one point, if not for an unfavourable bounce on one of @Andrew Copp’s scoring chances, the Danish star would’ve registered his sixth multi-point performance of 2021-22.
Set to face the Rangers for the 10th time in his career, Ehlers has generated a fair amount of success against this opponent in the past, scoring three goals and eight points in nine previous matchups. Perhaps he can continue to make an immediate impact following his 19-game absence.

Last Game: One assist, four shots, two hits, 25:12 minutes (season-high)
To put it simply, centre @Pierre-Luc Dubois has been an absolute beast lately. Not just in the offensive zone, but across all 200 feet of the ice surface. The redemption tour from last season’s disappointing performance remains red hot and appears to be picking up momentum this month.
Putting this team squarely on his back, opposing defences have struggled mightily to slow down the 23-year-old, who’s posted one goal and eight points over his previous four contests. Steamrolling the competition, Winnipeg’s power forward has been the lead driver for its most productive even-strength line, consisting of @Kyle Connor, @Evgeny Svechnikov and Dubois.
Then there are his defensive skills, which have seen the left-hander backcheck consistently in transition, stick lifting effectively and winning numerous puck battles along the boards. If that wasn’t enough, his stellar puck control has also been on display all season long and has been a key factor in his recent offensive production.
New York’s skaters need to be well-prepared for No. 81 on Sunday, if not, they’re going to be in for a rude awakening during this upcoming clash.

Last Game: Two goals, three shots, 15:31 minutes
With the Mar. 21 trade deadline fast approaching, veteran @Paul Stastny is certainly catching fire at the right moment and will attempt to continue his recent stretch against the Rangers.
Proving to be a scoring machine, skating alongside teammates @Mark Scheifele and @Blake Wheeler has done wonders for the 36-year-old as of late, where he’s recorded three goals and five points through his last three games. Not to mention, he’s also been one of the few skaters to enjoy much success on the power play during this recent stretch, which has seen him create three of those five points with the extra skater.
Considering TradeCentre 2022 is a little over two weeks away, Stastny’s current surge, assuming it continues, could potentially improve whatever package the Jets receive in return for his services.
More from Jets Nation:
Uncategorized
Recent articles from Thomas Hall