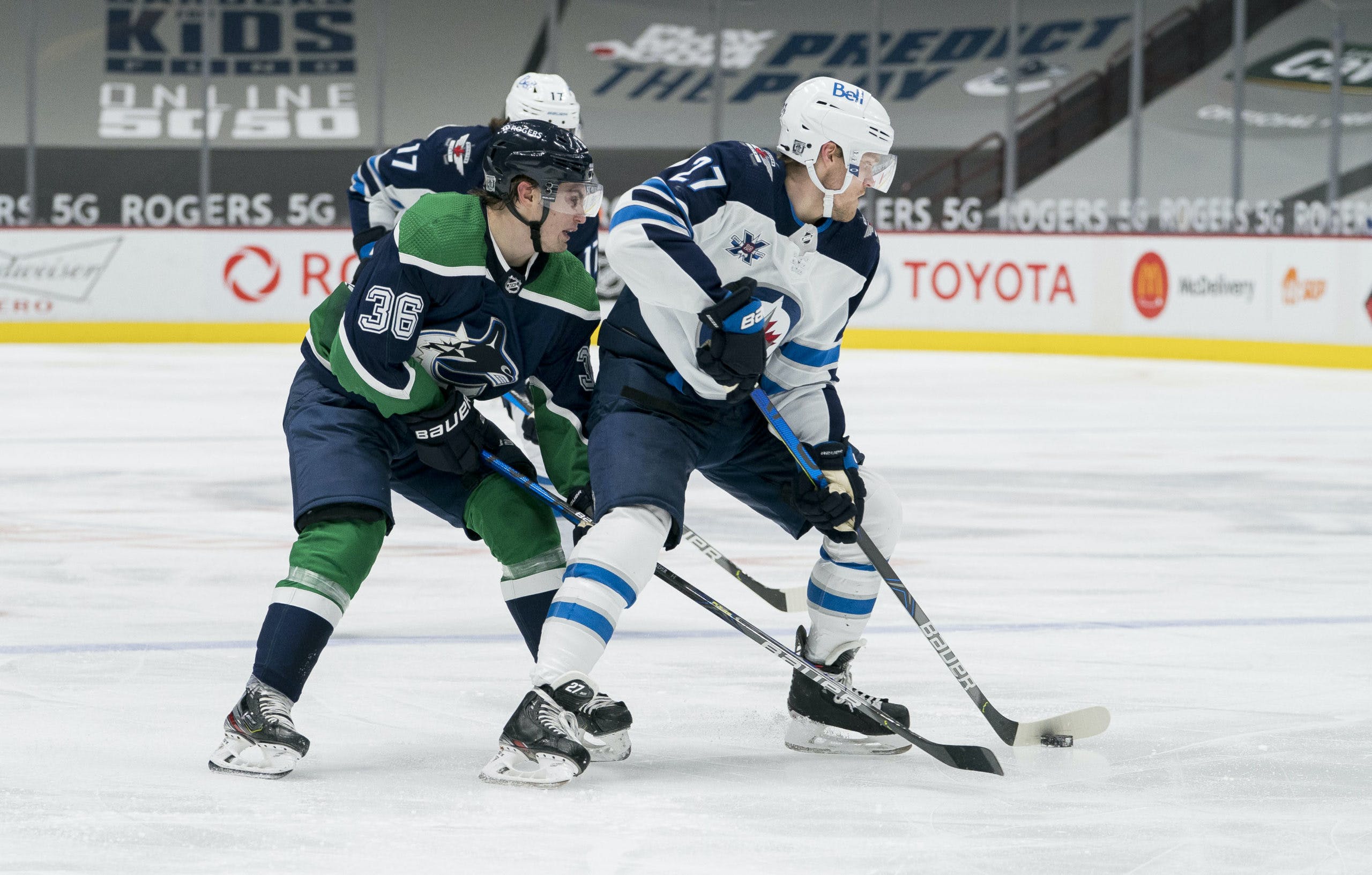 By Thomas Hall
1 year ago
Following a tough 2-1 shootout defeat against the Edmonton Oilers, the Winnipeg Jets will be right back in action just one day later as they’ll be visiting the Vancouver Canucks, who’re currently in the middle of a tire fire, during the second half of this back-to-back series.
Meeting for the first time this season, the Jets will be facing these struggling Canucks at a perfect time, at least for them, as this west coast opponent has lost five straight and sits near the bottom of the league standings with a miserable 5-10-2 record. Making matters worse, their fanbase has quickly turned on them, calling for general manager Jim Benning to be fired last time out against the Colorado Avalanche.
Safe to say, things are pretty intense surrounding the Vancouver market right now – not that Winnipeg supporters should feel any sort of sympathy for them.
For a preview of this Friday night affair, here are three players to watch for when the Jets and Canucks faceoff against each other at Rogers Arena:

Remember when forward @Nikolaj Ehlers was held scoreless through the first four games of the 2021-22 campaign? No? Yeah, you probably aren’t alone in that sense. Since then, the Danish superstar has only failed to register a point three separate times, as he’s posted five goals and 12 points over the last 12 games.
More recently, Ehlers is currently riding a four-game point streak, which has seen him showcase his impressive slap-shot skills in each of the last two contests. Now that he’s paired with teammates @Andrew Copp and @Mark Scheifele, the 25-year-old has started to find his offensive stride, allowing him to excel with this talented duo.
Considering the Canucks are allowing the sixth-most goals per game (3.41) this season, paired with Ehlers’ recent success, it seems the explosive left-hander could be in store for another quality performance on Friday.

In what’s been a season to remember thus far, forward @Pierre-Luc Dubois has continued to redeem himself from his forgettable 2020-21 performance, as he’s scored nine goals and 15 points through just 16 games in 2021-22.
For comparison purposes, Dubois earned only eight goals and 20 points over 41 games with the Jets last season after coming over via trade from the Columbus Blue Jackets. That’s right, the 23-year-old power forward has already surpassed his scoring totals from a season ago, and there are still 66 games remaining this season!
Ever since Dubois has been paired alongside teammate @Kyle Connor, the two have been inseparable, at least on the ice, making for an extremely lethal duo. In turn, chances are the 6’3″ centre and his dynamic partner will be poised to generate plenty of scoring opportunities during this matchup in Vancouver.

After starter @Connor Hellebuyck opened this back-to-back series against the Oilers on Thursday, it’s time to hand things off to backup @Eric Comrie, who’ll be making his first start since Nov. 6 and his fifth appearance on the season.
While his expectations were set extremely low heading into 2021-22, Comrie has performed much better than previously anticipated, as he’s produced an eye-opening 1.98 goals-against average and a .926 save percentage through four games.
Though it’s still early in the schedule, it’s difficult to ignore the fact that the 26-year-old has been pretty reliable so far and will be looking to maintain his strong start against the Canucks. Since they’re averaging the sixth-fewest goals scored per game (2.47), and have also been held to two markers or fewer over their last five contests, keeping pucks out of the net could prove to be very attainable.
With a reliable group in front, Comrie might not be peppered with too many shots in this contest, likely providing him with a quality opportunity to register his fourth victory of the campaign.