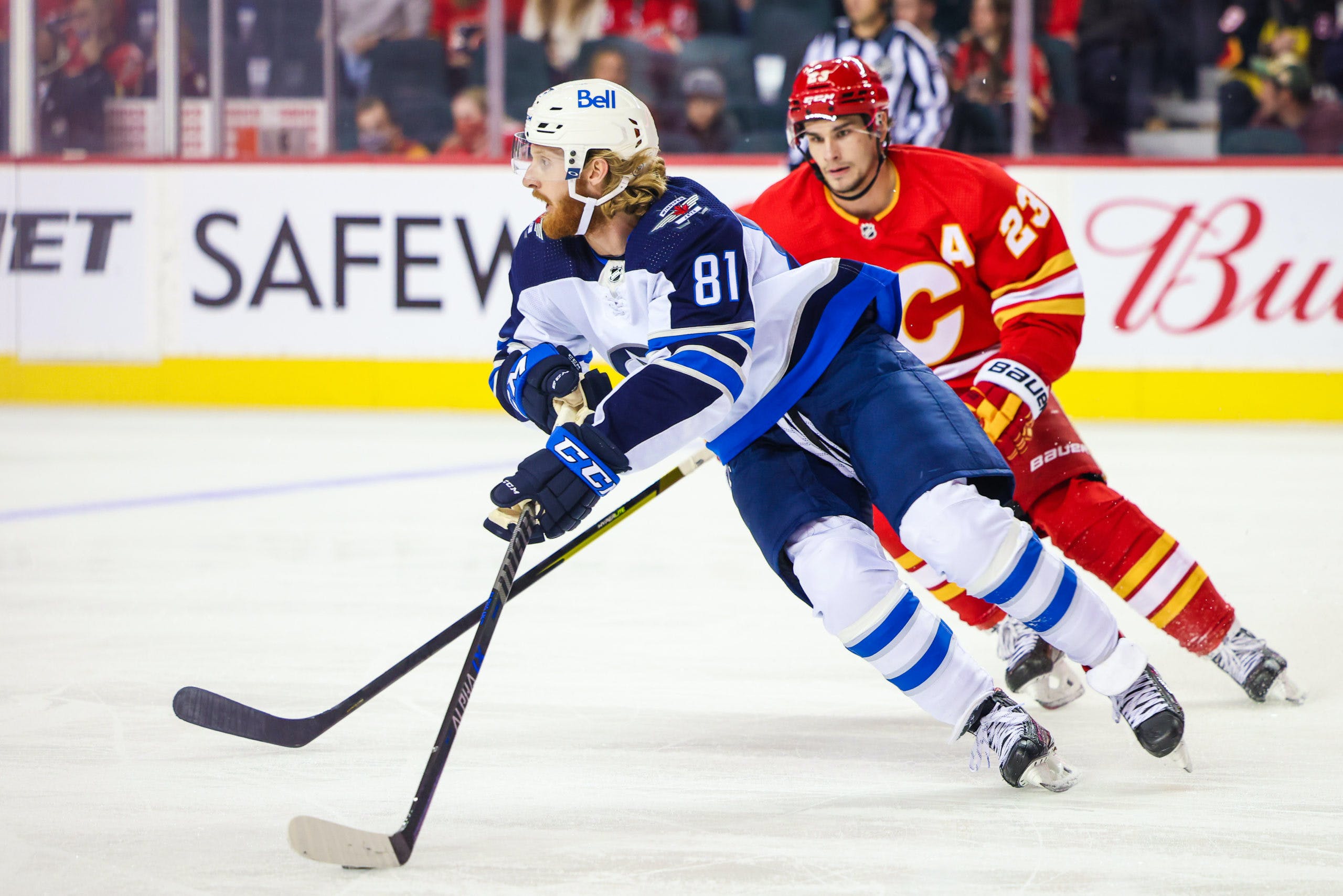 By Thomas Hall
7 months ago
Originally, Friday’s contest versus the Calgary Flames was supposed to serve as the Winnipeg Jets’ season finale. But thanks to the blizzard from a few weeks ago, their schedule has been extended through May 1, when they’ll wrap up the campaign against the Seattle Kraken.
Before then, this franchise will attempt to build off its recent success, which has seen them win two straight contests. An impressive feat after losing four straight games beforehand. Since they’ll be facing a Flames team who’s looking ahead to the playoffs, extending this winning streak to three games should be fairly attainable.
Having said that, it’s not like this matchup will simply be given to the Jets, either. The club will need to earn this victory, just like they’ve done in each of their two previous games.
For a preview of this showdown, let’s explore three skaters worth watching during Winnipeg’s second last contest of 2021-22.

Last Game: One goal, three points, four shots on goal, 20:28 minutes
After breaking franchise records in back-to-back games, what might forward @Kyle Connor do for an encore? Perhaps he’ll inch himself closer to the 50-goal mark.
Heading into Friday, Connor currently sits with 46 on the season, just four back of becoming the fifth skater in the league to reach that prestigious threshold. If successful, he’d join @Auston Matthews, @Leon Draisaitl, @Chris Kreider and @Alex Ovechkin in this regard.
Can the 25-year-old sharpshooter score four goals in two games? Absolutely. He did so earlier this season from Oct. 19-21, where he registered a pair of markers against both the Minnesota Wild and Anaheim Ducks.
Though, since Connor has averaged 0.6 goals per game this season, the odds will certainly be against him. But if there’s anyone capable of catching fire at this time of the year, it’s No. 80 on the Jets.

Last Game: One goal, two points, two shots on goal, 16:12 minutes
All season long, forward @Nikolaj Ehlers has been a driving force for Winnipeg and while just two games remain, that shouldn’t be any different the rest of the way.
Over the last two games, Ehlers has stood out offensively, posting two goals and three points during this span. As a result, he’ll enter Friday’s contest just one back of his career-high in goals (29), which he set during the 2017-18 season. That was across a full 82-game campaign.
This season, the 26-year-old has been limited to just 60 games due to injuries and COVID-19, and yet, he’s still managed to create 28 goals and 54 points. There aren’t many other skaters in the NHL who can say that.
It’s worth wondering if the Jets would’ve made the post-season this year if Ehlers hadn’t missed so much time. Nevertheless, if he extends his goal streak to three games, he’ll at the very least match his career-high in a significantly shorter time.

Last Game: One assist, two blocks, 21:50 minutes
Nearing the end of a very productive 2021-22 season, defenceman @Josh Morrissey will surely be aiming to finish strong across these final two games, beginning with this upcoming tilt against the Flames.
Thus far, Morrissey has scored 12 goals and 36 points – both of which are career-highs – through 77 contests. Currently, he’s riding a two-game point streak, where he’s notched a primary and secondary assist. The biggest aspect of his craft that’s been on full display, though, is his remarkable skating with possession.
Acting as a dominant puck carrier isn’t something he’s suddenly picked up, either. He’s showcased this skill throughout the second half. Recently, however, the 6’0″ defenceman has seemingly increased his confidence even further as his skating edges have been extremely noticeable, particularly in the offensive zone.
If this trend continues, chances are Morrissey will find his name located on the score sheet for a third straight contest.