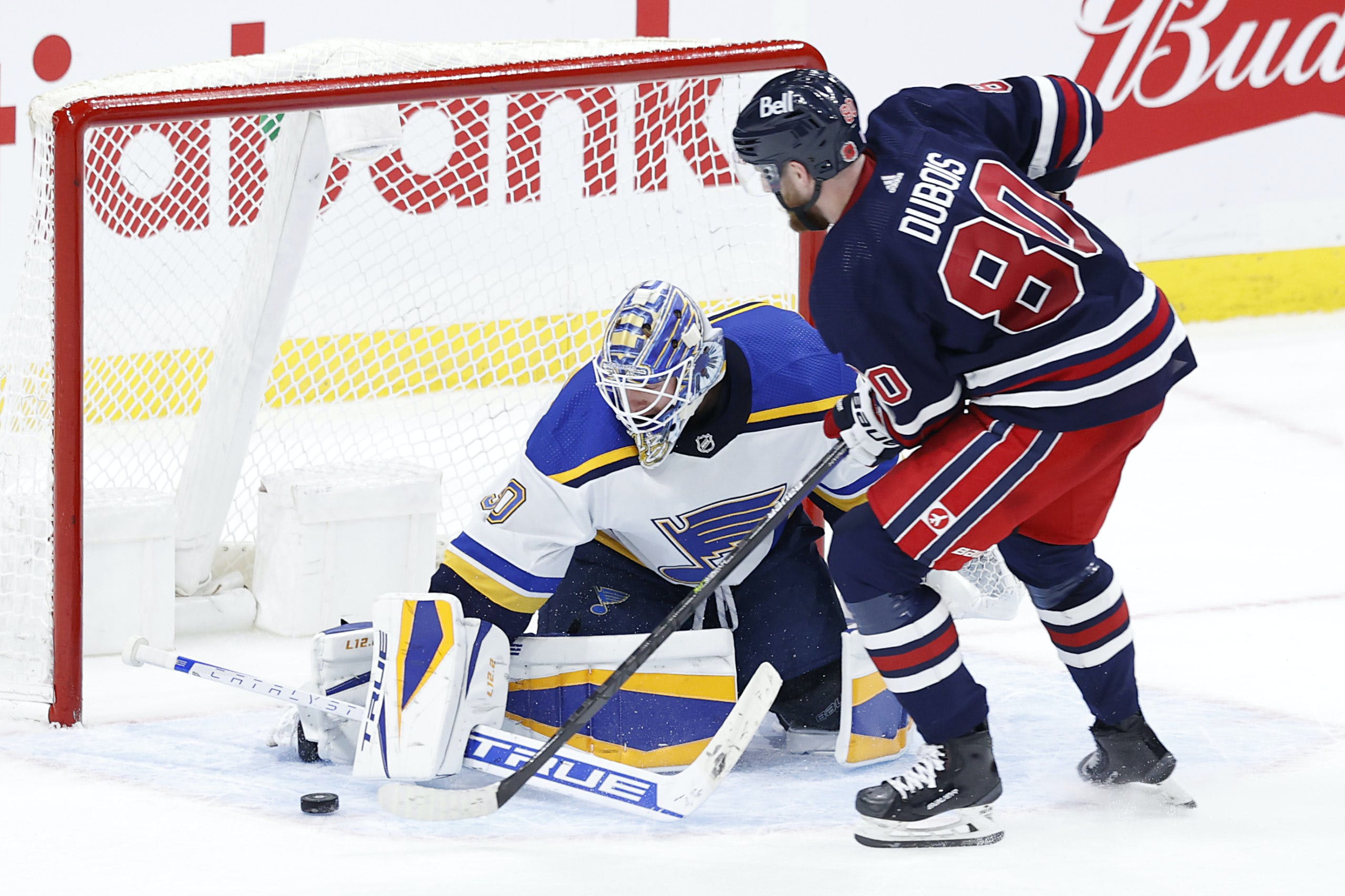 By Thomas Hall
1 year ago
Another Tuesday, another action-packed showdown for the Winnipeg Jets – this time coming against the St. Louis Blues.
In what’s starting to become a very stressful trend, the Jets were involved in a fourth-straight Tuesday night thriller, unfortunately, this contest didn’t feature a positive outcome this time around.
Beginning with the opening 20 minutes, Winnipeg was charged with a tripping penalty late in the first period, ultimately allowing Blues forward @Pavel Buchnevich to hand his club a 1-0 lead. Then in the middle frame, the home team answered back with a goal of its own, which saw defenceman @Neal Pionk undressing his defender before blasting one home for his second score of the season.
Entering the third period tied 1-1, a dominating shift from the Jets’ top line – consisting of @Kyle Connor, @Pierre-Luc Dubois and @Evgeny Svechnikov – eventually resulted in No. 81’s ninth goal of 2021-22. But just past the midway point of the final frame, @Logan Stanley failed to tie up his man in front of the net, allowing @Jordan Kyrou to tap the puck in, tying the game at 2-2.
After five minutes of overtime couldn’t solve anything, this exciting matchup headed for a shootout, which lasted four rounds. In the end, an impressive display of puck handling from captain @Ryan O’Reilly proved to be the difference-maker, handing Winnipeg a second consecutive defeat.
For a look back at what stood out during this Central Division contest, let’s explore three takeaways from the Jets’ third overtime/shootout loss of the season.

Usually, goaltender @Connor Hellebuyck is the one who wills his team to victory despite being largely outplayed by the other team all game long. Well, the shoe was on the other foot Tuesday night as @Jordan Binnington carried the Blues on his shoulders to his sixth win of the 2021-22 campaign.
Though the Jets largely dominated in time of possession, scoring chances and shots on goal, those three areas weren’t enough to surge past Binnington. In total, the 28-year-old frustrated the opposition through all three periods, particularly during the final 40 minutes, stopping 39 of his 41 shots against.
Digging deeper into his stellar performance, Binnington was seen making numerous highlight saves throughout this game, most of which came from around the net. While Winnipeg’s skaters generated 19 high-danger scoring chances and 14 shots on goal, the 2019-20 Stanley Cup champion only allowed one goal of that variety.
In particular, the third line – including @Adam Lowry, @Mark Scheifele and @Blake Wheeler – lead the charge for their team in this department, combining for 11 high-danger chances. And yet, neither of these three forwards could sneak one past St. Louis’ netminder.
Considering how many times this team has been on the right end of these types of performances over the years, it seems a little poetic, albeit, most annoyingly, they were frustrated by a talented goaltender in this matchup.

After missing five games due to COVID-19, Scheifele has now been able to participate in a week’s worth of games, four to be exact, and is starting to prove he’s completely turned the corner on that difficult point of the schedule.
Most notably, the 28-year-old arguably enjoyed his best performance of the young season against the Blues, as he made a strong impact nearly every time he stepped onto the ice. Statistically, the right-hander centre posted three shots on goal, three high-danger chances, three blocks and one rebound created over his 22:21 minutes of ice-time – highest among all forwards.
Whether it was attempting to capitalize on wraparound opportunities, searching for rebounds around the blue paint or joining a mad scramble in front, the former first-round selection was seen parked all around the net at both 5-on-5 and during power-play situations.
Despite being unable to crack the score sheet, which wasn’t entirely his fault, Scheifele excelled as a facilitator throughout this Tuesday night affair. Along with creating his own scoring chances, the 6’3” forward also helped set up quality opportunities for Wheeler, Pionk and @Jansen Harkins, although none of them cashed in on those chances.
Taking these factors into account, it might be time for coach Paul Maurice to slightly readjust his forward lines, allowing No. 55 to advance back into the top-six group.

Despite failing to record a single goal through the first month of the season, Pionk’s scoring woes have quickly faded away in November as he’s taken a huge step in that department as of late.
Just two games after potting his first marker of 2021-22, which proved to be the game-winner against the Chicago Blackhawks, the right-hander blueliner’s offensive talents were on full display once again on Tuesday. Paired with his three shots on goal and one high-danger chance, the 26-year-old made everyone’s jaws drop in the second period thanks to his remarkable sequence at the blue line, leading to his second goal of the year.
After receiving a pass from teammate @Dominic Toninato, with Kyrou in coverage, Pionk initially pump-faked at the blue line, forcing his defender to draw closer. Once that happened, the Jets’ defenceman suddenly spun away while still maintaining possession of the puck, skating into the middle of the ice to prepare for his shot.
Even with multiple skaters in front, the former undrafted free agent blasted the puck on net and after it deflected off a body in the slot, it found its way past the red line for the score.
Adding to his impressive showing, Pionk received a golden opportunity to capture his second goal of the game, but after taking a perfect pass from Wheeler, he couldn’t finish on his drive to the net and sent his backhand shot wide.
Uncategorized
Recent articles from Thomas Hall