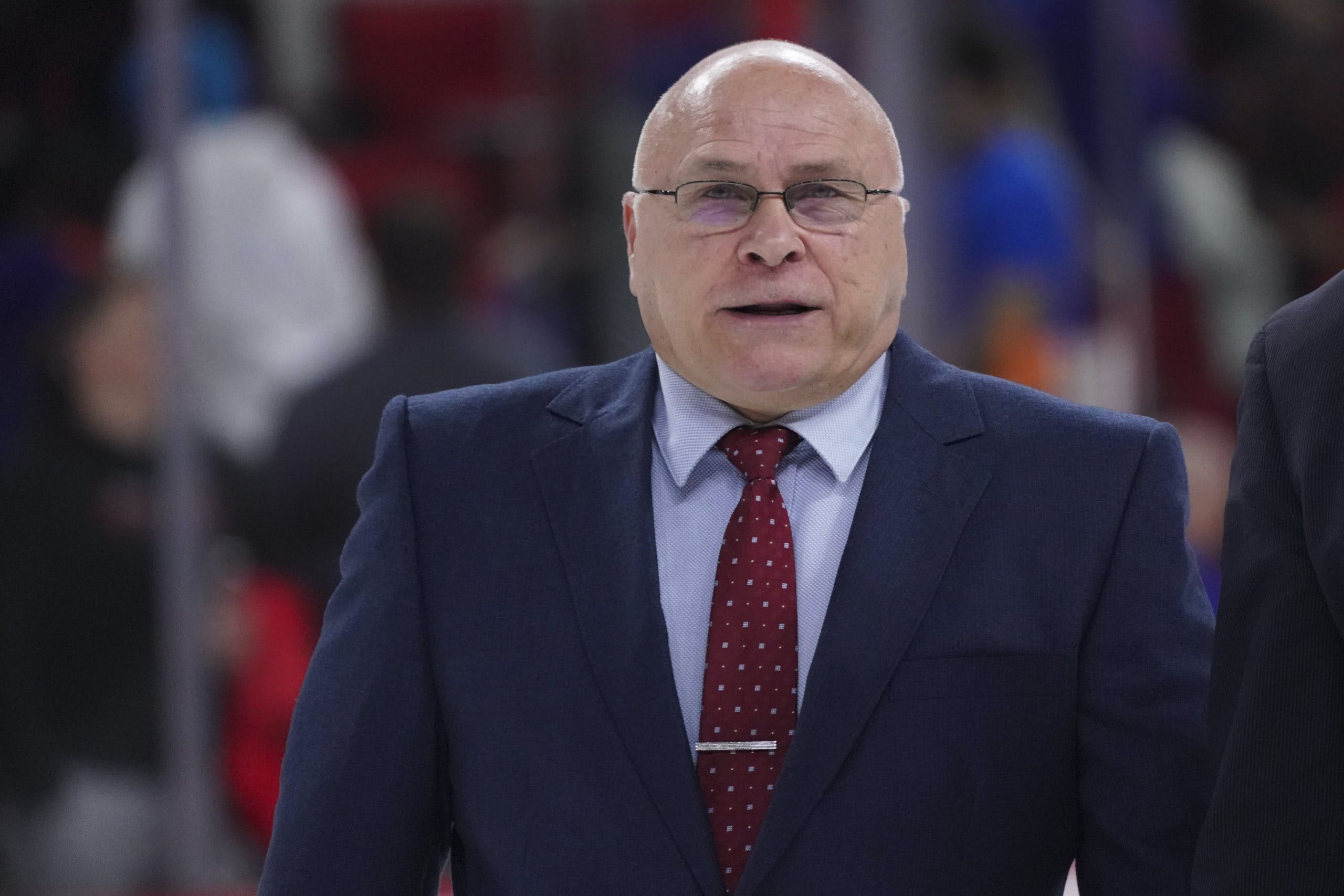 By Colton Davies
6 months ago
Following a season-ending 4-3 victory over the Seattle Kraken, general manager Kevin Cheveldayoff was quick to address the media regarding interim head coach Dave Lowry’s future, as well as other members of the coaching staff.
The Jets released Lowry, associate coaches Jamie Kompon and Charlie Huddy. With the changes, Cheveldayoff mentioned that the Jets would be going through a full-scale interview process to hire a new head coach. During what was nearly a 30-minute media availability, Cheveldayoff spoke about recent staff changes, “I met with Dave (Lowry) and told him that as well, and said if he wanted to be part of that formal search that he had earned that opportunity. We will grant him a formal interview process in that regard.
“I met with all the assistant coaches as well and told them that we’re going to go through this process and that there’s a chance that they’re part of that process moving forward when we finally select a head coach, but there’s also a chance that they might not be there.”
So now the search beings, and we’ll break down five potential candidates. The Jets made it clear that they would like this individual to have ties to the city. However, If they want to make this search really interesting, they should go off the board completely similar to what the Carolina Hurricanes did in bringing in assistant general manager Erik Tulsky.

Scott Arniel is a name that many Jets fans will have flashbacks to. The former NHLer suited up for 406 games with the Jets throughout the 1980s’ and registered 192 total points. A beloved player in the city of Winnipeg and before retiring, he spent a bit of time with the Manitoba Moose back when they played in the IHL.
Now, Arniel has a coaching history, which includes being a former head coach for the Moose from 2006-2010. He led the Moose to the Calder Cup finals in 2008-09 and was named the AHL Coach of the Year. After his tenure with the Moose, he became the head coach of the Columbus Blue Jackets for two years, missing the playoffs entirely.
He then spent four season’s as an associate coach with the New York Rangers until 2018-19 when he was named assistant coach of the Washington Capitals. Arniel’s background in Winnipeg, winning an AHL championship and being around teams like the New York Rangers and Washington Capitals looks very good on a resume.
Arniel is definitely a favourite in my opinion to get the job.

Barry Trotz is the latest NHL coach to find himself on the chopping block and looking for a job. Lou Lamoriello and the New York Islanders announced Monday that Trotz would be relieved of his head coaching duties.
The longtime and highly respected coach spent 15 years with the Nashville Predators before moving on to coach Alex Ovechkin and the Capitals. In 2017-18, he led them to a 49-26-0 record and helped them win the Stanley Cup. Trotz has spent the last few seasons with the New York Islanders. In 2018-19, he was named the NHL Coach of the Year for a second time in his career. He went on to guide the Islanders to the Eastern Conference Finals last season.
With Trotz’s impressive resume, and willingness to work with teams and veteran players, he’d be an excellent fit in Winnipeg.

Jets fans are very familiar with Randy Carlyle, in fact, anyone in hockey is familiar with the guy. He carved out a solid NHL career, as well as a coaching tenure that won him a Stanley Cup with the Anaheim Ducks in 2006-07 under the watchful eye of Brian Burke.
However, since being fired from the Ducks in 2018-19, he has yet to land another NHL gig. This opening with the Jets could be his chance to get back into coaching one more time. In 1997, he replaced Jean Perron as the head coach and general manager of the Manitoba Moose until they left the IHL and joined the AHL, Carlyle then became president of the team.
With his history of not only being a Jets player but managing the Moose and being directly involved with the organization, I can see why Jets owner Mark Chipman would be inclined to give Carlyle another shot. It might also not be that easy, Carlyle has a history of creating a toxic work environment and is a coach that demands a lot out of his players. Though, given his time off the last few years, maybe he is more forgiving nowadays. Regardless, I’d avoid the inevitable disaster

James Patrick is Winnipeg-born and bred, that’s one of the reasons why I chose him as my off-the-board selection to be the Jets’ next head coach. Patrick has a long playing history in the NHL, he suited up in over 1,200 games throughout a 21-year playing career.
After his playing career, Patrick spent seven years as an assistant with the Buffalo Sabres, and four years with the Dallas Stars before finding his new home in major junior. Now, he’s the head coach of the Western Hockey League’s (WHL) Winnipeg Ice. During Patrick’s first two seasons behind the bench, the Ice missed the playoffs both years. After going back to the drawing board, Patrick was able to turn the Ice around and instill a winning culture in the locker room.
This past season, he led the Ice to a 53-10-5 record, and they were the number one team in not only the WHL but the CHL as a whole. Granted, Patrick is an off-the-board pick but Tampa Bay Lightning head coach and back-to-back Stanley Cup champion Jon Cooper was coaching in the USHL prior to being hired in the NHL.
If Cheveldayoff and Chipman are willing to go through a few more trials and tribulations, this could be a beneficial move.

Last but not least, Pascal Vincent. An extremely familiar name within the Jets franchise. He spent five years as an assistant coach to Paul Maurice and five years as head coach of the Moose. This past year, he took on a role with the Columbus Blue Jackets, but a head coaching position could be in his favour.
He has great relationships with Chipman and Cheveldayoff and during his 10 years associated with the franchise, he helped mould several Moose players into NHL stars. With the Jets looking close to home, it’d be hard not to see his name on the shortlist of candidates.
Honourable Mentions: Jon Montgomery, Paul MacLean, Travis Green, Nate Leaman, Lane Lambert, David Nemirovsky