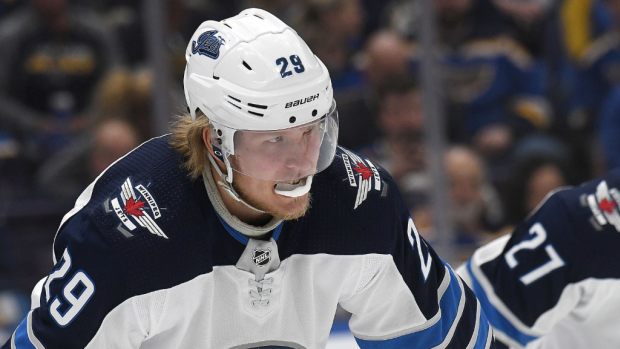 By Thomas Hall
1 year ago
Without question, the biggest story of the off-season was whether the Winnipeg Jets would actually trade forward @Patrik Laine, but that scenario didn’t end up coming to fruition. So now what?
Is he upset that he wasn’t traded during the off-season? Will he let that outcome affect his performance this season? Can the Jets do or say anything to change his mind? Could playing alongside center @Paul Stastny keep him happy in 2021? Is there still an outside chance he could stay in Winnipeg long term?
Unfortunately, none of those questions will probably be answered before the 2020-21 campaign opens in just over a week, meaning the club likely won’t receive any clarity on the former first-round pick’s future before they face off against the Calgary Flames on Jan. 14.
That being said, we already know Laine isn’t planning to sit out this season until he’s traded, as the 22-year old arrived at training camp on time earlier this week and appears ready to put these recent rumors behind him. Though this will likely be a topic that’ll stretch into next summer, the 6-foot-5 winger isn’t paying any attention to the outside noise and is focused on his preparation for this upcoming season.
“I’m here aren’t I?” Laine mentioned. “That’s the only thing I’m worried about right now. I’m not in charge of what other people are saying, I don’t worry about that stuff. Even Wayne Gretzky got traded, people get traded all the time. It’s part of the game you need to be aware of. It’s part of the business side.
“I’m just here. I just want to play. I’m not worried about all the talk and all the speculation, that kind of stuff. It’s not my job to worry about that.”
Slated to become a restricted free agent after this season, the Jets haven’t made any major progress in negotiating a new deal with Laine, which is exactly why general manager Kevin Cheveldayoff tried to utilize him as trade bait over the off-season. Though it seems his future won’t be in Winnipeg, especially since his agent made that very clear a few months ago, the 2017 All-Star is excited for the regular season to open and is looking forward to helping his team take a positive step forward.
“I don’t worry about tomorrow,” Laine explained. “Right now I’m here. I’m excited to play. I’m in good shape. I’m going to be a new player this year. And [I] just want to play well. That’s going to be best for both parties. What happens in the future, that’s not even my call. I’m going to work hard every night and that’s all I can do.”
Over his 68 games last season, Laine averaged a career-high 19:25 minutes of ice time per game, producing 28 goals, 63 points, 16 power-play points, 0.41 goals per game, 0.93 points per game, 226 shots on net, 97 hits, 41 takeaways, and 35 blocks.
With camp lasting only 10 days, which is now down to just eight days, there isn’t any time to waste and it’ll be extremely important for the Jets to make the most out of these practices and scrimmages. Aiming to hit the ground running when the regular season begins, Laine believes everyone should be working their tails off during this short period of time in hopes of enjoying a strong start to the campaign.
“We need to battle way harder than we’ve ever battled during camps [before] since there’s no exhibition games,” Laine discussed. “It’s a good thing that we have the scrimmage, that way we can really push ourselves – push the guy next to you – that’s the way we’re going to help one another to be ready when the puck drops.”
Jets News
Recent articles from Thomas Hall