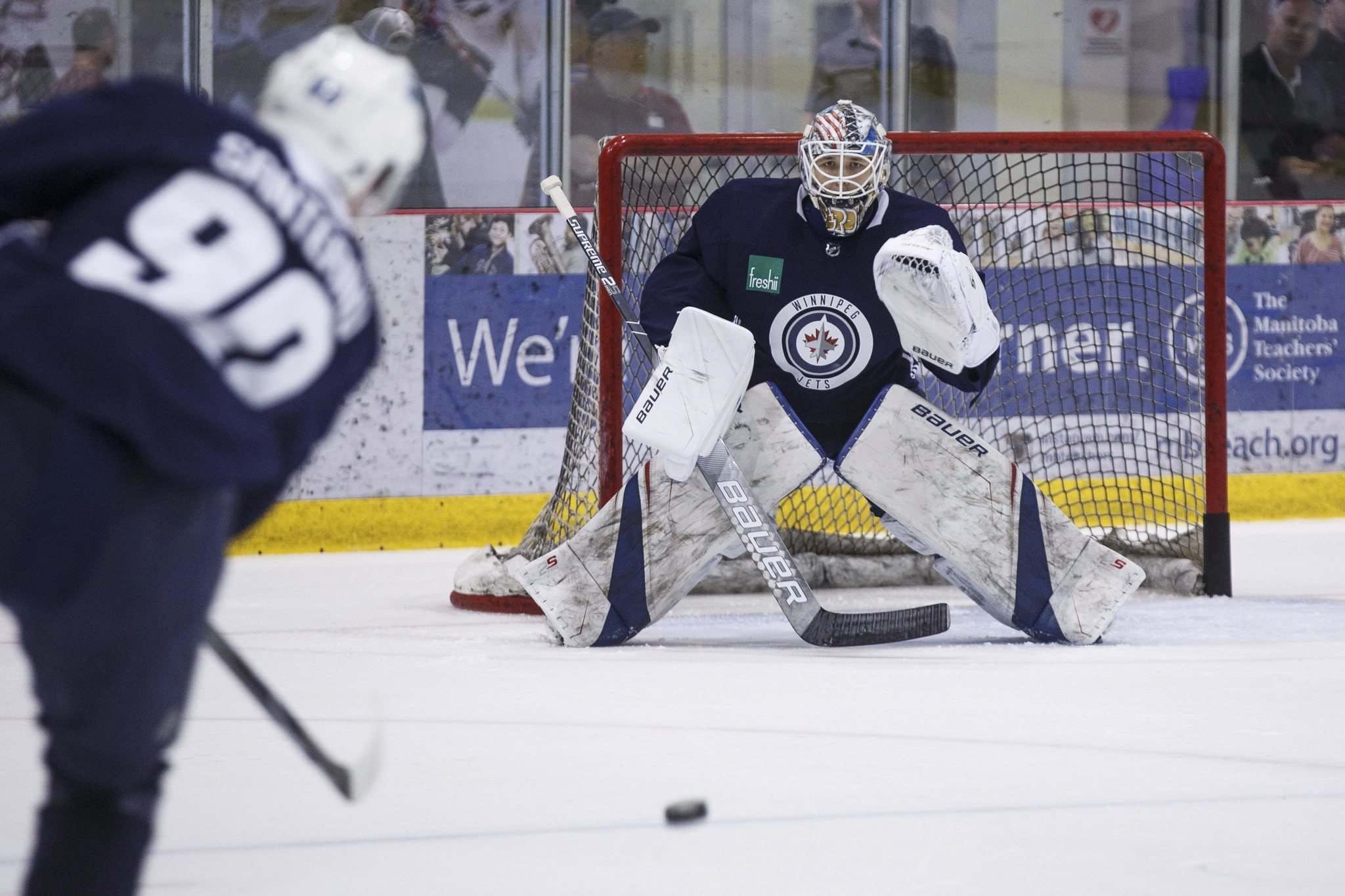 By Thomas Hall
1 year ago
Heading into training camp this year, the Winnipeg Jets already knew who their starting goaltender was going to be, obviously, @Connor Hellebuyck. As for the backup gig, well, that competition is currently between @Eric Comrie and @Mikhail Berdin.
Pouring water on this situation, the Jets’ brass has essentially stated the second-string netminder position is Comrie’s to lose, at least for now. So where does that leave Berdin? The 23-year-old is on track to become the Manitoba Moose’s starting goaltender, however, he also possesses an outside chance to steal the backup spot in the National Hockey League before camp concludes.
As things stand right now, Hellebuyck is slated to start each of the final two pre-season games, leaving this weekend’s back-to-back duties up to Comrie and Berdin. So in total, the organization’s top goaltending prospect is likely slated to make his first and only exhibition start of 2021 against either the Edmonton Oilers or the Vancouver Canucks – that’s not much of an opportunity.
Nevertheless, the former sixth-round selection is focusing on what he can control this fall and plans to continue working his tail off to prove he deserves to make his NHL debut this season, whether that’s at the beginning of the regular season or sometime afterwards.
“I just focus about myself,” Berdin explained while sporting a black eye during his press conference Friday. “I just try and keep pushing myself harder every day and I want to be in [the] NHL this year.”
After enjoying an impressive performance during his inaugural campaign with the Moose in 2019-20, Berdin was expected to return to the American Hockey League last season, unfortunately, ramifications from COVID-19 forced him to begin overseas in Russia. But once hockey returned to North America, he flew back across the pond and made 30 appearances in the AHL before the shortened season drew to a close.
Back for his third professional season, the 6’2″ netminder spent the entire summer working on his conditioning and physicality in the gym, allowing him to enter training camp in tip-top shape. With an NHL roster spot up for grabs, the youngster is determined to showcase his talents during practices, scrimmages and pre-season games in hopes of making a lasting impression on the coaching staff.
“I think I had big progress last year,” Berdin discussed. “I can say I played a really good season in the AHL last year, and I was excited that I played. I think I did lots of things to get better to the level where I am right now and I think I’m ready to go.”
Enjoying a productive stint with SKA St. Petersburg of the Kontinental Hockey League last season, Berdin appeared in 14 games, posting a 6-3-2 record, a 2.51 goals-against average and a .912 save percentage.
As for his time with the Moose, the left-hander earned a 13-11-5 through 30 games, recording a 2.89 goals-against average and a .897 save percentage.
With the calendar shifting to October, the countdown to the regular season has officially begun, which leaves just one week remaining before camp wraps up. Though Berdin features a ton of confidence about where his game currently sits, and rightly so, he may need to wait a little while longer before transferring his favourite passion over to the highest level of competition.
“I love to play hockey, I think that’s where it comes from,” Berdin mentioned. “If you don’t love your job, you’re never [the] best. But, if you want to play in the NHL you have to love your job.
“I think I’m pretty close right now. I’m feeling pretty good.”
Jets News
Recent articles from Thomas Hall