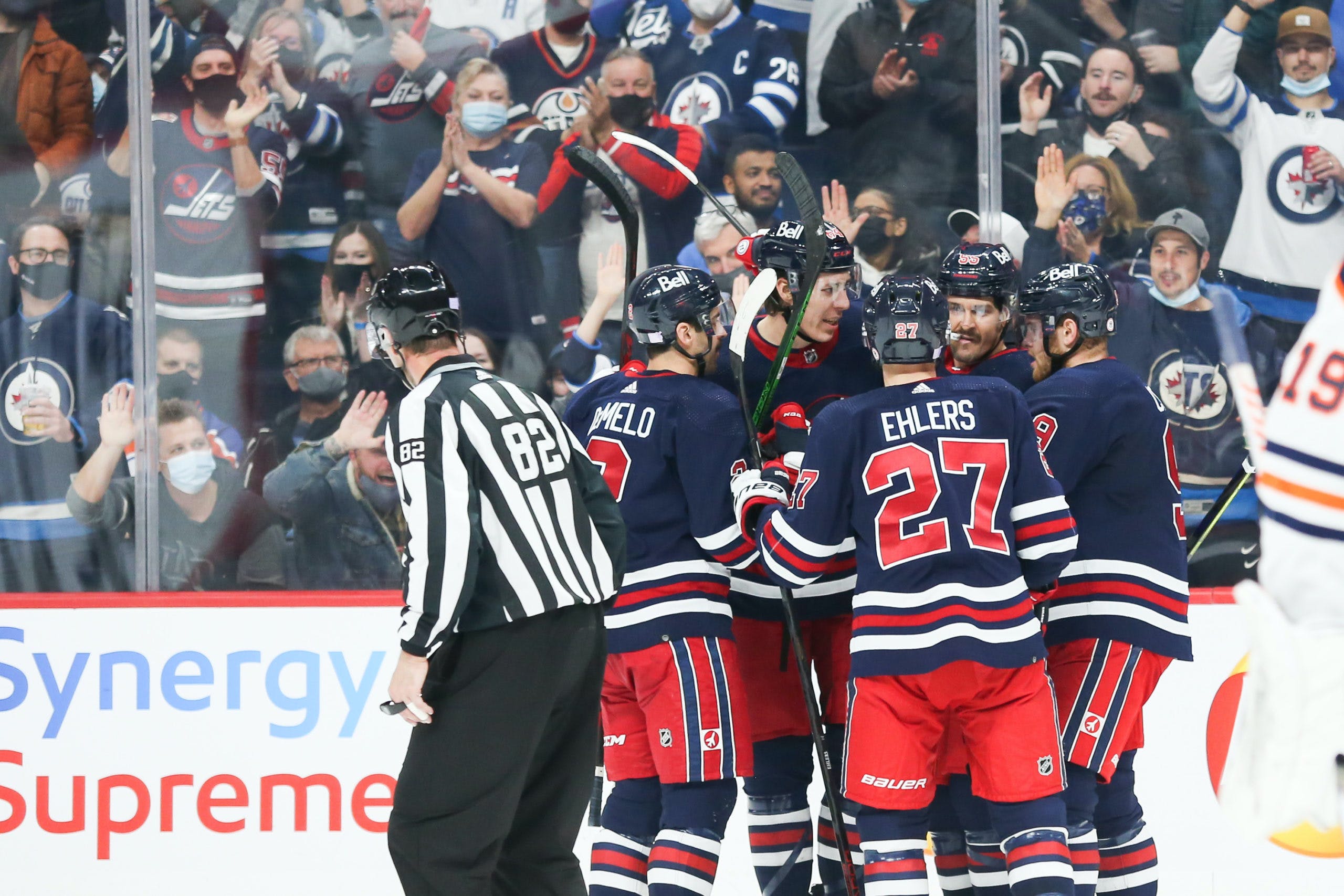 By Thomas Hall
1 year ago
Meeting for the first time since last season’s Stanley Cup Playoffs, the Edmonton Oilers and Winnipeg Jets matched up against one another Tuesday night, and while this was only a regular season contest, it certainly didn’t disappoint for the home crowd at Canada Life Centre.
Coming out strong in the opening 20 minutes, it became evident very quickly that the Jets were fully prepared to take on the Oilers’ high-powered offence, which saw them hold their opponent scoreless through the first period. As a result, forward @Adam Lowry’s second goal of the season, which was made possible thanks to a turnover created in the neutral zone, handed his team an early 1-0 lead.
Then in the middle frame, Winnipeg’s skaters continued to increase their level of intensity, particularly in the defensive zone, allowing them to keep Edmonton off the scoreboard through 40 minutes. From an offensive standpoint, this team didn’t begin to slow down either as they received goals from @Nikolaj Ehlers, @Pierre-Luc Dubois and @Mark Scheifele, granting them a 4-0 edge heading into the third period.
Not even a pair of power-play goals from @Leon Draisaitl could bring the Oilers back from their four-goal deficit, as @Kyle Connor put this game away with an empty-net marker – extending his goal streak to four games – allowing the Jets to come away with a well-deserved 5-2 victory.
Looking back on this impressive showing, here are three takeaways from the first of three meetings in 2021-22 between Winnipeg and Edmonton:

Outstanding Defensive Performance at 5-On-5

Heading into this showdown against the Oilers, there was plenty of discussion around whether the Jets would be successful in containing superstar forwards @Connor McDavid and Draisaitl, for the most part, they did exactly that.
Despite being tasked with an extremely difficult assignment, Winnipeg found a way to limit the scoring chances generated by Nos. 97 and 29, especially during 5-on-5 situations. In total, these two skaters combined for just one shot on goal and two scoring chances, although neither of them occurred from within high-danger areas, according to NaturalStatTrick.com.
Incredibly, McDavid and Draisaitl were both held without a single high-danger chance at 5-on-5, which had only happened three other times this season prior to Tuesday’s contest. In particular with Edmonton’s captain, he was seemingly bottled up almost every time he touched the puck, preventing him from creating space in the offensive and neutral zones.
Expanding on this remarkable defensive performance, the Jets held their opponent to just six high-danger chances at 5-on-5 through all three periods, including just one chance of that variety in the first period. In turn, they only allowed an expected goals against rate of just 1.72, and for this team, that should be considered a pretty solid accomplishment.
Most notably, there were nine Winnipeg skaters that stood out the most from an overall standpoint, including @Neal Pionk, @Andrew Copp, @Kyle Connor, @Blake Wheeler, @Brenden Dillon, @Nate Schmidt, Ehlers, Scheifele and Dubois, who each registered an on-ice xGF percentage of at least 50 percent or higher during 5-on-5 situations.

Among the many line changes that were made halfway through last Saturday’s matchup against the Los Angeles Kings, one of them saw Copp, Scheifele and Ehlers paired together – a trio that proved to be extremely effective against the Oilers on Tuesday.
Though they weren’t the only line to enjoy a considerable amount of success, so too did the Connor-Dubois-Wheeler line, this newly formed pairing instantly started to click early on and was responsible for the two goals scored at 5-on-5 in the second period. Additionally, they also generated seven scoring chances and four high-danger chances, resulting in a team-high 59.4% xGF percentage.
Starting with Ehlers’ fourth goal of the season, after regrouping in the neutral zone, Schmidt sent an outlet pass cross-ice for Copp, who displayed some impressive patience while waiting to locate a passing lane over to the left-wing. Once a lane opened up, the versatile forward passed the puck over the Danish sniper, allowing him to explode into the offensive zone before blasting one home for the score.
Then with under a minute remaining in the middle frame, building off a strong shift from the club’s fourth line, Copp won a puck battle down low and began cycling it to the blueline. With it eventually coming to @Logan Stanley, he attempted to send a shot on net, although Scheifele was able to gain position in the slot and ultimately tipped in his second goal of 2021-22.
Even after just a game and a half, it’s already becoming very clear that this talented trio is a force to be reckoned with, making for a fairly balanced attack regarding the Jets’ top-six forward group.

So far this season, defenceman @Josh Morrissey hasn’t shied away from jumping up into the rush, which is something he didn’t appear nearly as comfortable with throughout last season.
Showcasing this trait once again on Tuesday, Morrissey was seen skating aggressively into the offensive zone multiple different times when his team controlled possession. At 5-on-5, his best scoring opportunity came during the opening 20 minutes after Wheeler made a fantastic juke move around his defender, allowing him to set up the left-handed blueliner for a high-danger chance in the slot.
Unfortunately, Oilers goaltender @Mikko Koskinen made one of his 22 saves, denying the 26-year-old of his first even-strength goal of the season.
Along with his success when five skaters were on the ice, Morrissey also made a strong impact on the power play as he was largely parked around the net, ultimately resulting in two shots on goal and one high-danger chance. In addition, he also earned a primary assist – his second of two on the night – on Dubois’ goal, where he fired a hard pass down to the power-forward that allowed him to tap it home.
With three goals and eight points through just 15 games, the former first-round selection is currently on pace to surpass his offensive metrics from 2020-21 and at this rate, he could potentially be in store for one of the top statistical showings of his seven-year career.