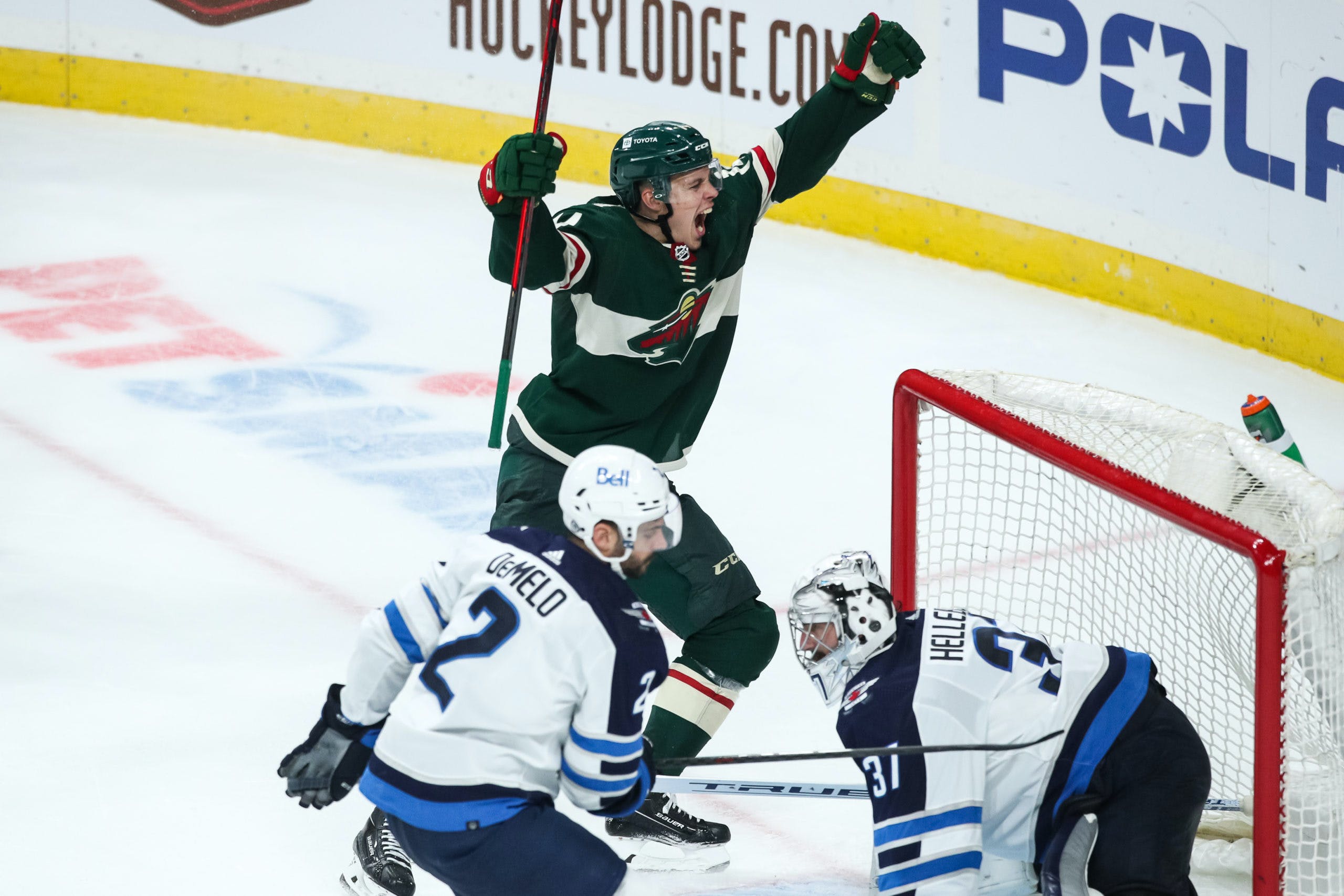 By Thomas Hall
1 year ago
Heading into the 2021-22 season, virtually no one was expecting the Winnipeg Jets to open on an 0-3 start, and yet, following a trio of disappointing losses out of the gate, that’s exactly what’s happened.
Reaching a new level of frustration Tuesday night, the Jets entered the final 20 minutes of their contest tied 3-3 with the Minnesota Wild, however, a pair of goals from forwards @Pierre-Luc Dubois and @Andrew Copp provided their team with a two-goal lead early in the third period. With the game clock nearing the five-minute remaining mark, it seemed this hard-fought battle was all wrapped up, unfortunately, that wasn’t the case at all.
Thanks to two unanswered goals from @Marcus Foligno and @Joel Eriksson Ek, the Wild were able to march back from their two-goal deficit and tied the score at 5-5 with just under one minute left in regulation. Since neither team broke this even score before the buzzer sounded, this game required some 3-on-3 overtime, which certainly didn’t lack any explosiveness.
Witnessing end-to-end action for both clubs, the extra frame proved to be a very intense five-minute period that kept everyone on the edge of their seat, or at least until the 3:30 mark.
After @Adam Lowry and @Logan Stanley were denied on their 2-on-1 scoring rush, Minnesota answered back with an odd-man rush of its own, although @Dylan DeMelo was tasked with defending three skaters on his own. As we all know by now, that didn’t end favourably for Winnipeg, as Eriksson Ek ultimately potted his third goal of the game, earning his team the victory.
For a look back at what stood out, both positively and negatively, here are three takeaways from the Jets’ deflating 6-5 defeat in overtime:

The Central Division Rivalry Has Returned

Though these two teams didn’t face one another last season, they definitely made up for lost time as this showdown at the Excel Energy Center didn’t encounter any shortage of fireworks or heavy blows to the face.
On the surface, just glancing at the box score would be a quality indicator as to how physical this contest became, which resulted in a combined 41 hits and 11 penalties called. Digging deeper, things started going off the rails near the end of the first period when Wild forward @Kirill Kaprizov received a two-minute roughing infraction on Stanley.
From that point on, the emotion on both benches never faded away and was eventually capped off with a gruelling fight between @Brenden Dillon and Foligno, who surprisingly unleashed a superman punch shortly after dropping his gloves. Luckily, it landed on the side of Dillon’s helmet, causing no worse for wear.
Thanks to the aggression that was displayed in the opening 20 minutes, almost every play featured some sort of post-whistle scrum – a few that even resulted in additional roughing penalties. As a result, there’s no doubt a ton of ice bags were required post-game, particularly for someone like Dillon, who dished out a team-high five hits.
Considering there are still three meetings remaining between the Jets and Wild, all of which are scheduled before 2022, chances are this won’t be the only fiery showdown involving these two clubs.

In what’s been a clear weakness for the Jets so far in 2021-22, failing to clear the puck out of the defensive zone plagued them once again on Tuesday, proving to be one of the biggest factors leading to this disappointing outcome.
Though Winnipeg’s skaters were successful at winning puck battles along the boards, where they experienced issues was regarding their attempts to send pucks into the neutral zone, which for the most part, saw Minnesota’s players intercept them before they reached the blue line. In fact, they created four of their five goals during regulation in this regard.
Starting with @Mats Zuccarello, who netted a pair of goals through the first 40 minutes, his first marker of the game became possible when defenceman @Nate Schmidt failed to clear a rebound chance in the slot, allowing the 34-year-old to pounce on the loose puck. As for his second score, a turnover from @Mark Scheifele in the defensive zone ultimately allowed a bouncing puck to find its way into the net.
Along with struggling to clear the puck at 5-on-5, the Jets’ struggles became even more evident on the penalty kill, as their inability to alleviate the pressure in the defensive zone provided the Wild’s power play with additional scoring chances.
Unfortunately, these exact woes were on full display during Foligno’s second goal of the game, which saw Lowry and Copp unable to secure possession on the penalty kill. In turn, Minnesota’s skaters cycled the puck around the perimeter, ultimately allowing the 30-year-old to sneak one past goaltender @Connor Hellebuyck with @Josh Morrissey draped around him.

Kyle Connor’s Snipes are Back

After registering Winnipeg’s first goal of the season back on Oct. 13, forward @Kyle Connor served as a key offensive contributor for his team once again as he potted a pair of goals in the opening 20 minutes.
Revisiting his first marker of the contest, after receiving a pass in the neutral zone, Connor exploded down the wing before blasting a shot past Minnesota netminder @Cam Talbot, handing his team an early 1-0 lead. Then nearly five minutes later, the 24-year-old scooped up a bouncing puck in the slot and immediately fired it home, regaining his club’s one-goal advantage.
Adding to his impressive offensive showing, the 6’1″ forward received a cycle pass across the ice from Schmidt and quickly advanced the puck into the slot for Dubois, who wired his shot in the back of the net for the Jets’ second power-play goal on the campaign.
The only negative aspect of Connor’s performance came during the later stages of the game, where his positioning was slightly offside, which negated Scheifele’s empty-net goal that would’ve secured the victory. But aside from that instance, as significant as that moment was, the former first-round pick shined during his third game of the season.
Uncategorized
Recent articles from Thomas Hall