2021 Stanley Cup Playoffs – Round 1: Three Storylines Heading into Game 2 of Jets vs. Oilers 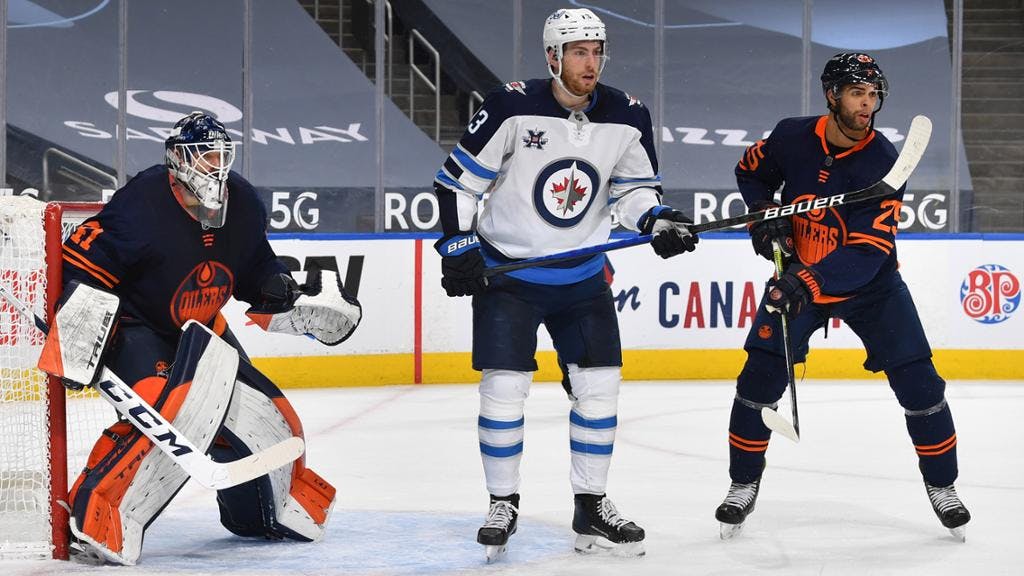 By Thomas Hall
1 year ago
Opening the first round of the Stanley Cup Playoffs on Wednesday night, the Winnipeg Jets shocked most experts by coming away with a 4-1 victory over the Edmonton Oilers and are now looking to take a 2-0 series lead before traveling home to Bell MTS Place.
Despite being counted out of this series before it even began, Winnipeg proved those same doubters wrong and showed they can hold their own against one of the most explosive offenses in the league. That being said, there’s no question Edmonton will be aiming to bounce back strong during this Friday night showdown in hopes of tying up this series at one game apiece.
Here are three storylines that could impact the second game of this playoff series between the Jets and Oilers:

While forward @Nikolaj Ehlers has been ruled out for Game Two of this series, teammate @Pierre-Luc Dubois, who suffered an undisclosed injury during the final regular season game, will be suiting up for Friday’s game and is expected to return to the Jets’ second line. As a result, the 22-year-old is slated to be reunited with forwards @Andrew Copp and @Paul Stastny, although this likely means @Kristian Vesalainen will come out of the lineup and serve as a healthy scratch.
Though Dubois hasn’t seen any game action in a week, he’ll still add a much-needed boost to the club’s top-six forwards and will hopefully be able to make an instant impact in the offensive zone. Based on his stellar production from last season’s playoffs, where he scored four goals and 10 points through 10 games, receiving a similar type of performance could significantly increase this team’s chances of taking a 2-0 series lead.

Heading into this series, containing forwards @Connor McDavid and @Leon Draisaitl was expected to be one of the biggest challenges for the Jets, and yet, they kept both of these all-star skaters off the score sheet in Game One. In particular, this dynamic duo was held to just one high-danger scoring chance each during five-on-five play, which kept both of them below a 0.3 xG rate in those same situations, according to NaturalStatTrick.com.
Digging deeper into McDavid’s performance, the Oilers’ captain, who produced a career-best 49.5% faceoff percentage in the regular season, struggled in that department during the series opener and lost six of his 11 faceoff attempts. While it’s nearly impossible to slow down both McDavid and Draisaitl beyond one contest, it’ll be crucial for Winnipeg’s skaters to play extremely tough and also take away any breathing room they might have for a second straight game.

Considering the Oilers generated the highest conversion rate (27.6%) on the power play in the regular season, staying out of the penalty box became a huge priority for the Jets during the series opener and they were largely successful in accomplishing that feat. Even though Stastny was charged with a high-sticking penalty, Edmonton’s skaters only created one shot on goal and were mostly kept to the outside over those two minutes with the man advantage.
Since Edmonton creates a large portion of its scoring on the power play, Winnipeg should be able to make this game a low-scoring affair if they can replicate that same level of discipline once again. But if they provide McDavid and others additional scoring opportunities on the power play, Game Two could develop into a run-and-gun type of pace, which would certainly be less than ideal.

The puck will drop at 8 pm CT and be available on CBC/SN along with 680 CJOB.
Uncategorized
Recent articles from Thomas Hall