2021 Stanley Cup Playoffs – Round 1: Three Storylines Heading into Game 4 of Jets vs. Oilers 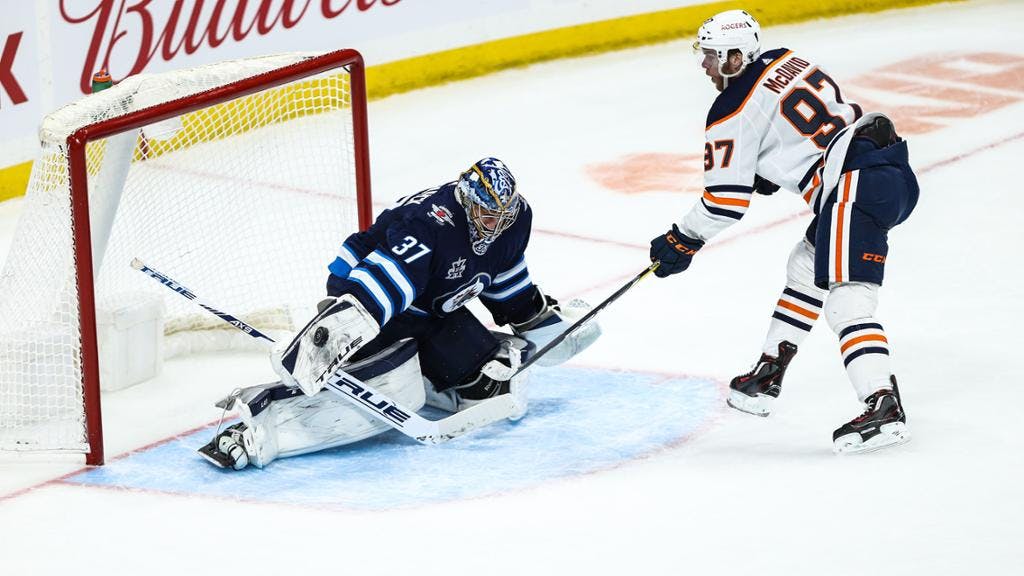 By Thomas Hall
1 year ago
Yes, this isn’t a dream, the Winnipeg Jets came back from a 4-1 deficit in the third period of Game Three, forced the contest into overtime and ultimately scored the game-winner to take a 3-0 series lead. Regardless of how we’ve reached this point, the important thing is that this team is just one win away from advancing to the next round.
Defying against all odds, Winnipeg shocked the hockey world Sunday night with a moment in history that no one will soon forget, especially for those people who expected this club to be eliminated from the playoffs in as early as five games. As for Edmonton, the objective is fairly simple moving forward: Win and the series continues, lose and the off-season begins.
Here are three storylines that could impact the fourth (and potential final) game of this playoff series between the Jets and Oilers:

Following a heavy workload in the regular season, resulting in a league-high 45 starts, goaltender @Connor Hellebuyck has been phenomenal through the first three games of this series and is slated to earn a fourth straight start in Game Four. Though the 2019-20 Vezina Trophy winner split time with backup @Laurent Brossoit during back-to-back series this season, the Jets are looking to complete this four-game sweep of the Oilers and will need their all-star netminder in goal to provide them a solid chance to accomplish that feat.
Enjoying a dominant performance during this opening round, Hellebuyck has stopped 114 of the 119 shots he’s faced through three games, resulting in a stellar 1.55 goals-against average and a .958 save percentage. If the 28-year-old can help carry his team Monday night, chances are this will likely be another low-scoring affair, which could be decided late in regulation once again.

After missing the first two games of this series, forward @Nikolaj Ehlers returned at the perfect time and made an instant impact during Game Three, scoring two goals – including the game-winner in overtime. Despite only receiving 15:46 minutes of ice time, the 25-year-old still provided a much-needed spark to the Jets’ offense and it’ll be crucial for him to continue making his presence felt the rest of the way.
While performing effectively during five-on-five play will be the main focus for Ehlers, it’ll be equally important for him to serve as a difference-maker on the power play, which was held scoreless prior to Sunday’s contest. But considering the second power-play unit, featuring Ehlers, @Pierre-Luc Dubois, @Mathieu Perreault, @Andrew Copp and @Josh Morrissey, went 2-for-2 during this comeback victory, it seems this group might begin witnessing an increase in playing time moving forward.

Entering the third game of this series, Winnipeg was performing much more effectively in the defensive zone compared to the regular season, however, they struggled with the defensive aspect of their game on Sunday and forced Hellebuyck to bail them out numerous times. In particular, defenseman @Derek Forbort had a forgettable performance in Game Three, as he committed three turnovers (team-high) and was the only skater on the ice for all three five-on-five goals against.
Despite blocking a trio of shots, all of which occurred during five-on-five play, Forbort faltered with his attempts to clear the puck out of the defensive zone and those giveaways resulted in additional scoring chances for Edmonton’s skaters. If the Jets are going to be successful at containing forwards @Connor McDavid and @Leon Draisaitl, they’ll need the entire blue line to play smart with the puck and win those 50-50 battles in the corners as well.

The puck will drop at 8:45 pm CT – good thing Monday’s a holiday – and be available on CBC/SN along with 680 CJOB.
Uncategorized
Recent articles from Thomas Hall