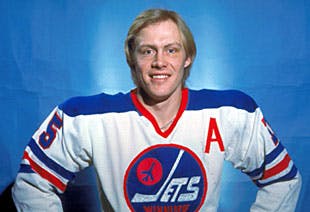 Whether discussing sports, music or pop culture, we’ve all heard an older relative, friend or co-worker casually mention, things were just different in the 70s. While my age makes it so I cannot speak to that directly, being a student of history makes me think they’re right. Imagine playing the world’s fastest and most physical game … without a helmet! I won’t even go on rollerblades without elbow guards, knee pads and wrist protectors, let alone play hockey at the highest level without a helmet. But things were just different back then. Beers in the dressing room and cigarettes on the bus, all in anticipation of the only night in Canada that mattered – Hockey Night. Allow me to introduce ½ of the Swedish Express –

Anders Hedberg – 1/2 of the Swedish Express

On any given night, a modern-day fan can tune in to watch a Russian player pass to a Canadian, who flicks it to an American and then to a Swedish centreman, who meticulously finishes the beautiful setup. Modern NHL rightfully boasts an eclectic group of players – but this wasn’t always the case – it is only possible because of the predecessors who paved the way. This includes Anders Hedberg and Ulf Nillsson who were literally hockey-pioneers. While they are the first to downplay this achievement, we should not overlook it. Imagine being one of the first foreign players in the 70s to move to the relatively unknown country of Canada and join a squad made up of ALL Canadians and Americans. Players not only had to manage language barriers, but also had to adapt to changes in food, the weather and legal expectations. This overall culture shock would hit most players hard, but Hedberg reported that the reassuring words of Bobby Hull not only calmed his worries, but also empowered him – “You don’t have to slash back or hit back or fight. Just skate and play and think.’

Hockey fans know that to earn a nickname like the ‘Swedish Express’ you can’t have been a slouch on the ice. Slouches don’t get nicknames in hockey. Anders Hedberg made his debut for the Winnipeg Jets in the 1974-75 WHA season after making a leap-of-faith from Sweden. The ‘Swedish Express’ would team up with the freshly signed Bobby Hull to create ‘The Hot Line.’ In hindsight, they should have been called ‘The Inferno Line,’ as the numbers this line put up was absolutely mind-boggling and deserved a nickname more powerful than ‘hot’. Hedberg dominated for the Jets – and when I say dominated, I mean DOMINATED. To put this in perspective – the NHL awards the Maurice Richard trophy to the league’s top-scorer in honor of Richard famously scoring 50 goals in 50 games. In the 1976-77 season, Anders Hedberg scored 70 goals in only 50 games. Granted it was with the WHA rather than the NHL, but combined with 61 assists, Hedberg averaged 1.9 PPG for an entire 68 game season. The Swede consistently delivered this same output throughout his time in Winnipeg, which resulted in four 100+ point seasons, two Avco championships and lifelong adoration from a small prairie city in Canada.

One year prior to the Jets’ 1979 inaugural season in the NHL, the ‘Swedish Express’ made its final departure from Winnipeg. Hedberg and Nilsson were drawn to the bright lights of New York City and a lucrative $2.5 million dollar deal made their decision that much easier. Hedberg and Nilsson had successful NHL careers and production, which included 79-points for Hedberg in his first season. Unfortunately, neither player would replicate the success they had in Winnipeg but, that was inevitable, as any fan lucky enough to have watched ‘The Hot Line’ knows that something that good can’t last forever. Hedberg went on to play 7 seasons in The Big Apple before pursuing several front-office positions, including spending 5 years as the Director of Player Personnel for the Ottawa Senators. ‘The Hot Line’ were inducted into the Jets’ Hall of Fame in an emotional 2016 ceremony, which forever cemented the Swedes in the Jets’ foundation. While there are countless variables to consider when ranking players, there is no denying Hedberg is one of the greatest to ever lace up his blades in the ‘Peg.
Twitter: Jonesinthezone