Revisiting the Andrew Copp trade one month in 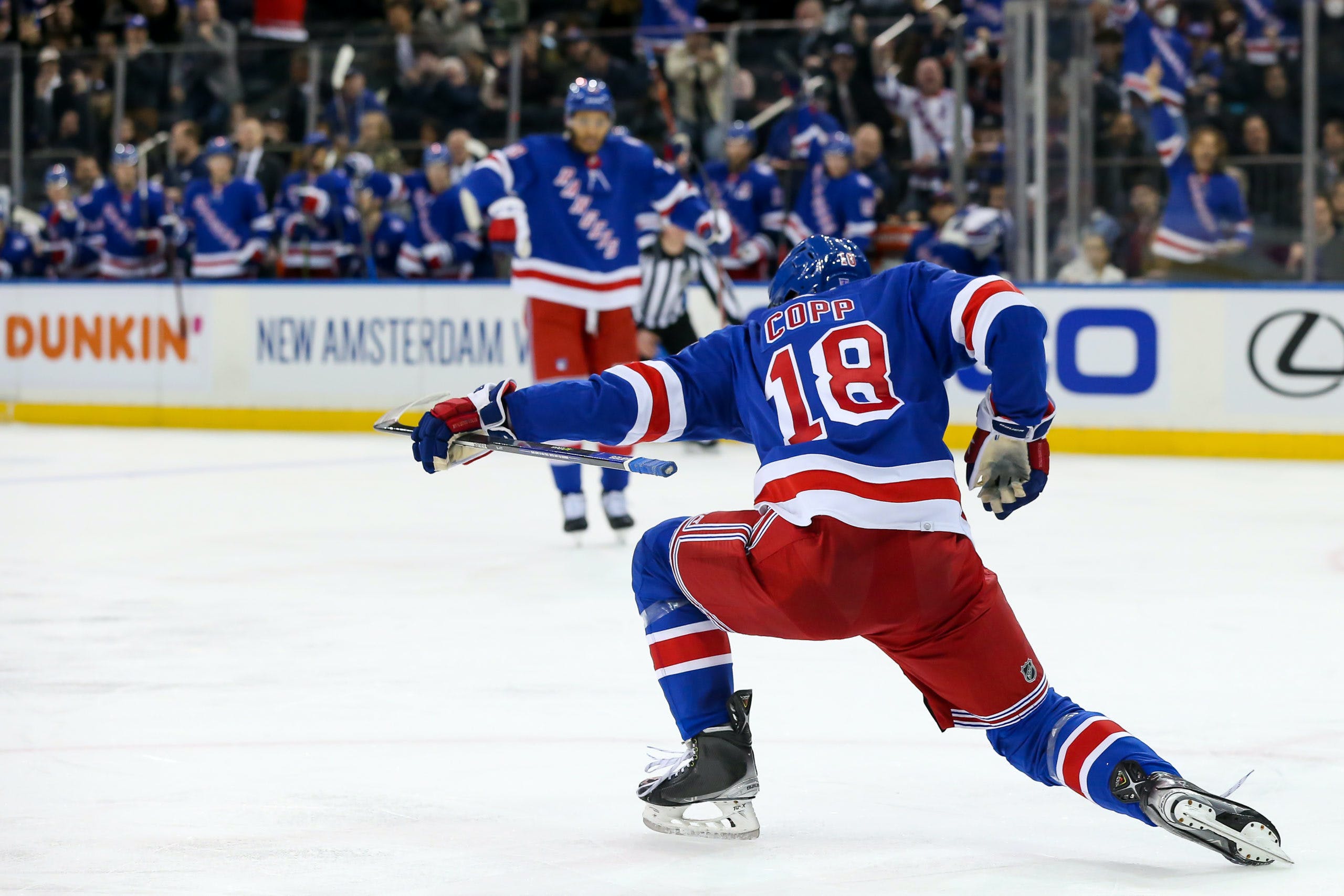 By Colton Davies
7 months ago
Tuesday marked forward @Andrew Copp’s first meeting against the Winnipeg Jets since being traded to the New York Rangers back in March. Let’s review where things stand for both sides.
At the 2022 Trade Deadline, we saw several moves involving big price tags; the Chicago Blackhawks stole a pair of first-round picks in exchange for @Brandon Hagel. The Montreal Canadiens received a first-round pick for former Jets defenceman @Ben Chiarot.
With price tags set so high, many Jets fans wondered what the team would fetch for Copp, who was a fan-favourite and all-around tradesman. As deadline day went on, news trickled out that the club traded Copp and a 2023 sixth-round pick to the Rangers in exchange for @Morgan Barron, a 2023 fifth-rounder and two conditional second-round picks. It finally happened.
Copp, who’s an unrestricted free agent at the end of the season, was set to secure a big payday and the Jets knew they’d be unable to retain his services. Especially given that he’s set career-highs across all categories. He’s a player that can be used in any situation, that’s something unique about Copp’s playstyle, but his supreme penalty killing is what makes him stand out from the rest. He’s already found success with the Rangers since arriving in the Big Apple, registering 14 points (five goals, nine assists) through his first 14 games.
Halifax Nova Scotia product, Barron, is the younger brother of Montreal Canadiens prospect @Justin Barron. He’s built like a fridge, standing 6-foot-4 and 220-pounds, he’s a force to be reckoned with on the ice and is a menace to knock off the puck.
Barron didn’t have your typical route to the NHL. He was drafted late in the 2015 QMJHL Draft by the Saint John Sea-Dogs but opted to play elsewhere instead. The 23-year-old played three seasons with the St. Andrew’s College Saints of the CAHS and during the 2016-17 season, he was named captain, where he registered 50 points in 46 games.
Then, Barron transferred to the NCAA and like popular sitcom character Andy Bernard, he spent three years at Cornell University. During his final year, he was named captain once again. A leadership trait is a strong suit with Barron, and that can take you a long way. He received numerous accolades over his three years, including the 2020 ECAC Player of the Year award, AHCA All-America honours, an All-Ivy League First Team selection and an All-ECAC Hockey First Team selection.
After being drafted 174th overall in the 2017 NHL Draft, and going through an uphill climb to playing in the show, he finally got his shot. After spending most of the 2020-21 season with the Hartford Wolfpack, Barron made his NHL debut on May 1, 2021, versus the New York Islanders.
Just a couple of games later, he fulfilled a dream that every hockey player has, scoring his first NHL goal in a game that came against the Washington Capitals.
Granted, Barron wasn’t the highest touted prospect in the Rangers’ system, and there were a few grunts and snarls when the trade was announced. But, he’s already made an impact with the Jets through his first nine games.
Of course, he registered his first NHL multi-point game last week against the Montreal Canadiens. His first goal as a Jet came when the Danish king, @Nikolaj Ehlers, made a gorgeous drop pass and Barron sniped the puck into the back of the net.
Then, shortly afterwards, Barron made a quick pivot move past @Rem Pitlick and fired a pass to veteran @Paul Stastny, who one-timed the puck past goaltender @Samuel Montembeault. This game provided Jets fans with a peek into the future. Here’s a player that’s not only built to physically dominate the centre position but like Copp, can likely slot in anywhere in the line-up, too.
According to NaturalStatTrick.com, Barron has posted a 52.42 per cent Corsi For Percentage (CF%), a 56.38 per cent Fenwick For Percentage (FF%) and a PDO of 931 at 5-on-5. Through nine games, however, these stats are almost meaningless but it gives you an insight into how he can be serviceable for the Jets.
While it’s still early to decide whose the winner of this trade is, I think this deal will likely work out for both the Jets and Rangers in the long run.