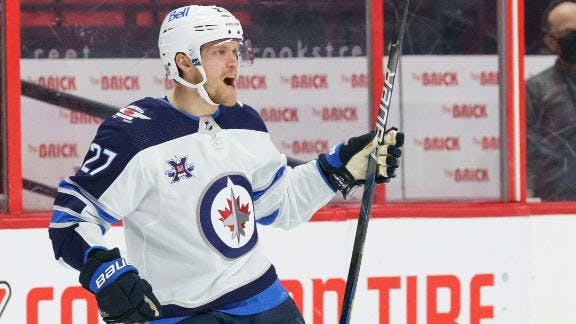 By Craig Jones
1 year ago
When traveling through Europe, I was lucky enough to meet the sweetest Danish lady named Jacomina. We were in Amsterdam, waiting in line to visit the Vincent Van Gogh Museum and people began complaining about the weather. I joked that I was from Canada and that this was nothing! That’s when she playfully tapped me on the arm and told me that in Denmark they have a saying, “Der findes intet der hedder dårligt vejr, kun dårligt påklædning!” Unfortunately, I don’t speak Danish, but she explained that it meant, “There’s no such thing as bad weather, only unsuitable clothing!” I’ve never forgotten that moment because, being from the Prairies, all we really know is bad weather for eight months, okay weather for two, and great weather for two more. Hence the spotlight on the lone Danish stud in the ‘Peg.
The Jets drafted Nikolaj Ehlers ninth overall in the 2014 NHL Entry Draft and, let’s be honest, it was a steal-of-a-deal. When you look at the draft board, the only player playing better than the former Halifax Moosehead is the incumbent Hart, Art Ross, and Ted Lindsay trophy winner Leon Draisaitl. This is why Kevin Cheveldayoff’s shrewd move to lock down the Danish Winger to a 7-year contract with an AAV of $6 million per year might be one of his best moves to-date. Combine that with the fact that Ehlers is only 25-years-old and has managed to average over 20 goals in four of five seasons, the Jets’ depth upfront is poised to be a lethal presence for years to come.
I’ve written countless times about the importance of having a hockey pedigree. Obviously, it doesn’t dictate a player’s success, but it sure as hell doesn’t hurt. Ehlers’ father was drafted by the New York Rangers in the 1984 NHL Entry Draft and, while he never played a game in the league, his hockey IQ was undeniable. The Danish Hockey Hall of Famer played over two decades in Europe before taking a coaching role in the Swiss League for nearly 10 years. Ehlers’ older brother Sebastian is currently applying his hockey trade in Demark, while his cousin Alexander True is playing for the San Jose Barracudas in the AHL. Not taking away from Ehlers’ hard work, but I’m sure it didn’t hurt having some ‘friendly’ competition in the house.
Enough of the past! Ehlers is absolutely CRUSHING this unique COVID-19 season. While The Dashing Dane currently sits seventh in goals, he’s doing it with significantly less ice-time and power-play minutes than the leaders he’s trailing. To put this into perspective, Auston Matthews, Connor McDavid, Leon Draisaitl, and teammate Mark Scheifele are all averaging 20-plus minutes per game, while Ehlers is averaging only 17 minutes per game. Casual fans would argue that Paul Maurice should bump those numbers up, but this is truly a double-edged sword. Yes, of course, there’s the chance that his production levels would go up if he was bumped up to the first line. However, more minutes doesn’t always equate to more points. The advantage of playing against a team’s second-line gives studs like Ehlers the chance to dominate lesser-competition, and his efficiency on the second-line this season has been something truly special. With the Jets currently sitting in third place with two games in hand over the second-place Oilers, it might be best to stick with another good ol’ adage, “Don’t fix it if it ain’t broke.”
Ehlers’ ceiling is sky-high this year and the North Division certainly seems prime for the taking. If Ehlers is able to keep this pace, there is no denying that the Jets will become one of the favourites to represent Canada in this year’s NHL playoffs. The past year has been unique in so many ways, and with Denmark recently losing its spot to Finland as the world’s happiest country, maybe Ehlers winning the Stanley Cup can help to boost the country’s morale back to No. 1.
Correction: If the ‘Peg can bring back the Stanley Cup to Canada for the first time in 28 years, Canada will be No. 1 and the Danes can stay No. 2. Fingers crossed folks.
Twitter@Jonesinthezone
IG:@Jonesinthezone
Uncategorized
Recent articles from Craig Jones