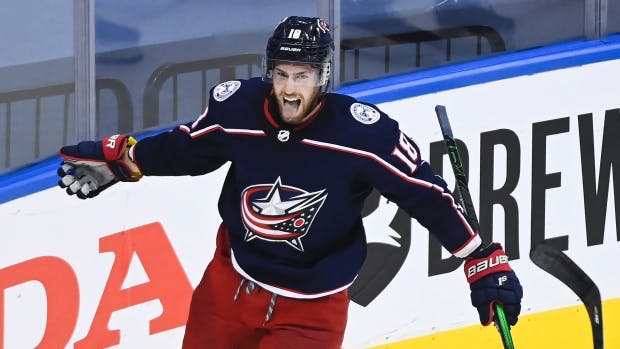 By Craig Jones
1 year ago

Welcome to the ‘Peg Pierre.

On the surface, this move may seem like any other blockbuster trade that exchanges drafted players for foreigners. However in this case, PLD will be far from an outsider. Pierre’s father, Eric, played one season for the Moose back in 1996 and has been an assistant coach in the Manitoba Capital since 2016. And while there is no denying that losing Laine and Roslovic hurts Jets fans, Dubois is far from a consolation prize. In his three seasons with Columbus, PLD didn’t miss a game, recorded 158 regular-season points, and far exceeded the expectations of his third overall selection. In fact, the Quebec native broke Columbus’s rookie scoring-record and will undoubtedly be looking to break a few more in Winnipeg.

While leaving a team under ‘forced’ pretenses isn’t ideal, outsiders never honestly understand one’s underlying motive. We’ve all been in the situation where that someone leaves a job and your first thought was, “It’s a great company, why would you do that?” … But unless you’ve walked a mile in their shoes…. Let’s be honest, neither Laine nor PLD hid their disgruntled sentiments – they both wanted out of their situations. We live in a player-empowerment era, which means the squeaky wheel gets the grease. Whether you side with the player, franchise, or owner, the days of Alexei Yashin are gone. If a player makes their discontent public, it’s only a matter of time until they’re moved.
All fans are hoping that No. 13 brings the same intensity and competitive-drive we love to see from anyone in a Jets’ jersey. It’ll be interesting to see how coach Paul Maurice uses the former Cape Breton Screaming Eagle. The assumption is that he’ll slot in behind Mark Scheifele and be paired with Nikolaj Ehlers. But maybe Dubois doesn’t need to be a second-line center. As the league’s seen with Draisaitl and McDavid, you don’t have to keep top players on separate lines. Imagine a Scheifele, Wheeler, and Dubois line attacking a nervous defensive pairing? Looks pretty good, doesn’t it?
Regardless, Dubois and Laine both get a fresh start and as fans we get the benefit of watching it all unfold. Unfortunately, COVID-quarantine rules are forcing us to wait to see PLD in action, meaning that the ‘winner’ of this trade won’t be determined anytime soon. Luckily, both teams acquired amazing youngsters that were looking for a change in scenery and will do everything to make their new home proud. The benefit for Jets fans is that PLD will be embraced by a passionate fan base, immediately inserted into a high-powered offense, and will be able to enjoy some good home-cooking… and we all know how far a home-cooked meal can go during these crazy times. Jets fans will be hoping it’ll be the difference-maker.
Twitter:@Jonesinthezone