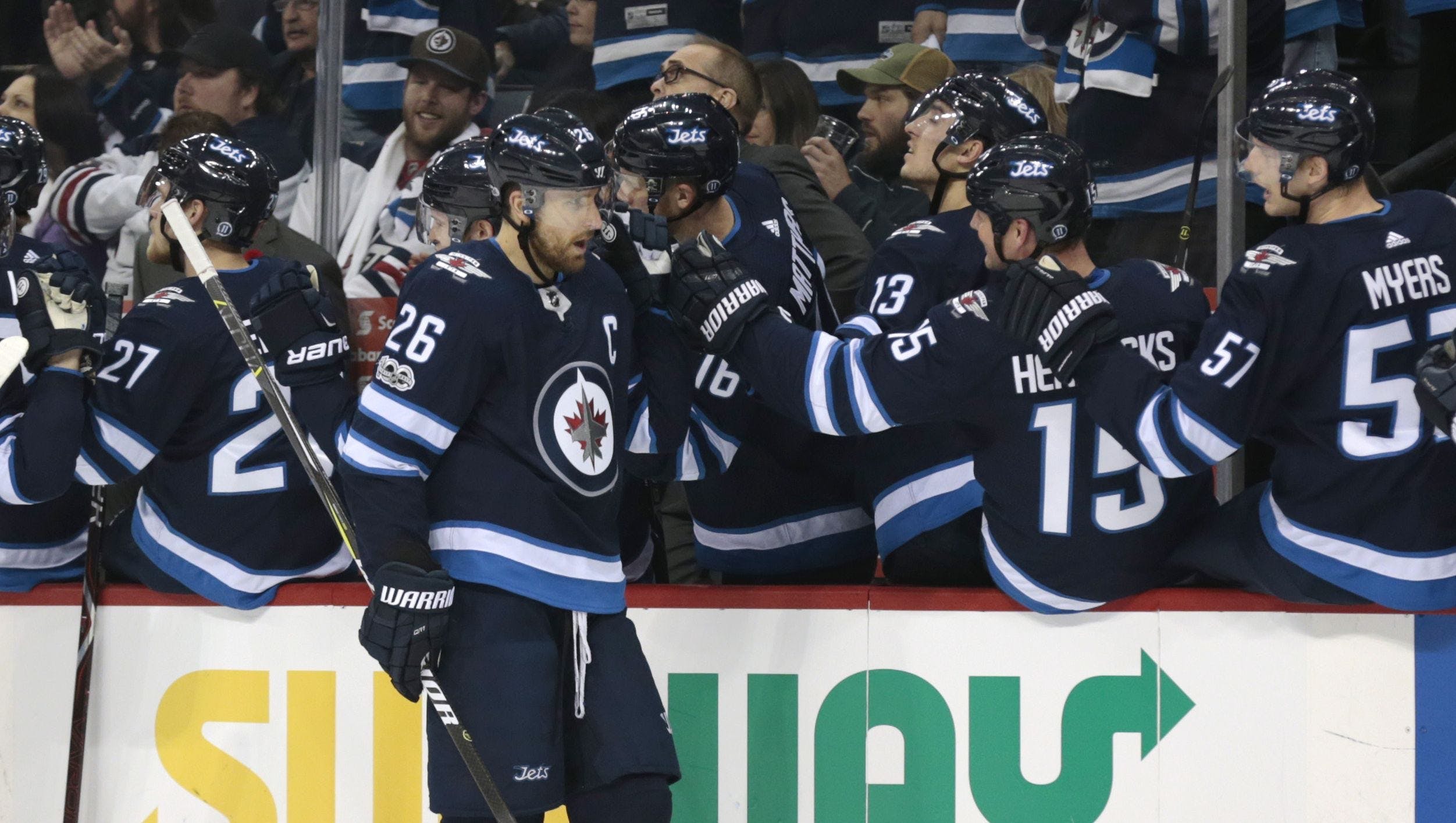 By Nation World HQ
1 year ago
by OddsShark (@OddsShark) – Sponsored Post
The Winnipeg Jets are on a long losing streak, but they are carrying some good head-to-head and moneyline history into a playoff-clinching scenario in Calgary. The Jets are +105 underdogs and the Flames are -125 favorites with a 5.5-goal total on the NHL odds for Wednesday at sportsbooks monitored by OddsShark.com.
The Jets are 6-3 in their last nine games against Calgary as the underdog, with six of those matchups finishing UNDER at betting sites. Only four of those games were at the Pengrowth Saddledome, where the Jets are 3-3 in their last six away games against the Flames. Winnipeg is 12-8 over its last 20 games as an away-underdog of 100 to +125, with the total going UNDER 12 times. The Flames are 7-3 in their last 10 home games as a -115 to -140 favorite, with five matchups finishing OVER and one in a PUSH (how the moneyline works).
Jets vs Flames | OddsShark Matchup Report
Winnipeg is 5-2-1 against Calgary. While the Jets boast a 16-13 edge in five-on-five goals, they are underwater against the Flames in expected goals-for percentage, or xGF% (45.4), scoring-chance share (45.5) and high-danger chance share (42.4), per Natural Stat Trick. The Jets are six-for-25 on the power play and the Flames are five-for-20. (All advanced stats involve score- and venue-adjusted five-on-five play.)
The Jets are 27-21-3 due to their seven-game losing streak, but had their best xGF% (67.7) since losing Nikolaj Ehlers (upper-body injury) during a 2-1 defeat against the Ottawa Senators on Monday. Winnipeg’s season-long form also includes a 12-5-1 record in away games with one day of rest, and they averaged 3.50 goals in those contests. Both the Mark Scheifele-Kyle Connor-Blake Wheeler and Pierre-Luc Dubois-Mathieu Perreault-Paul Stastny lines had proficient outings against Ottawa that failed to produce a five-on-five goal. Winnipeg activated defensemen Josh Morrissey and Neal Pionk against Ottawa, and both may be good plays in anytime scorer props.
Since April 5, the Jets are 18th in goals-for percentage, or GF% (48.1) and in 14th xGF% (49.1) among the 31 NHL teams. The Jets are 22nd in goals per game (2.54) and 20th in goals against (3.15) in this span. Their power play ranks 14th (19.5 percent) and their penalty killing ranks 21st (78.1).
Connor Hellebuyck, who is 21-16-3 with a 2.72 goals-against average and .912 save percentage, often absolves the Jets of their defensive sins. However, the Vezina Trophy-winning goalie has lost his last six starts and has a 4.40 GAA and .860 save pct. over that span. He did have the night off during Monday’s loss to Ottawa.
The Flames, at 22-25-3, are running out of road for a playoff push with a 10-point gap with six games to play. Calgary has the edge in xGF% in seven of its last nine starts and has been one of the tautest teams defensively over the last month. Calgary is deeper up front than the Ehlers-less Jets, and the Elias Lindholm-Matthew Tkachuk-Johnny Gaudreau first line and Mikael Backlund-Milan Lucic-Dillion Dube third line each had strong outings against Edmonton in the team’s last outing on May 1. Gaudreau, Tkachuk and Dube were 1-2-3 on the Flames in expected goals, according to MoneyPuck. The Flames are 4-3-1 in their last eight home games with three or more days or rest, and have averaged 2.88 goals in those contests.
Calgary is sixth in GF% (58.7) and fifth in xGF% (58.0) over the past 30 days. During this time, the Flames are 19th in goals per game (2.91) and fifth in goals against (2.27). Their power play ranks 21st (16.7 percent) and their penalty killing ranks 16th (81.5).
Jacob Markstrom, who is 18-18-2 with a 2.67 GAA and .906 save percentage, will likely start for Calgary. Markstrom has allowed two goals or fewer in nine of his last 10 starts.
Check out OddsShark on Twitter and Instagram or head to YouTube for analysis on this week’s top games. As well, the OddsShark Computer serves up daily NHL picks for bettors.
Uncategorized
Recent articles from Nation World HQ