Friday Folklore – The Boys Are Back In Town! 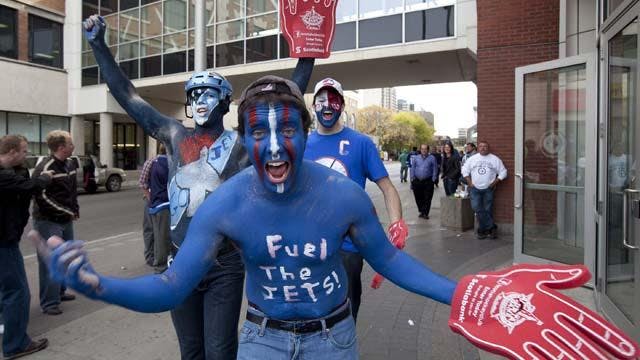 By Craig Jones
1 year ago
In this edition of Friday Folklore, we travel back to 1996. This was a time when the N64 was first released, Jay-Z, Spice Girls, and Backstreet Boys dropped their debut albums, and TGIF was a weekly teenage tradition. But it was also the time the Jets were stolen from Winnipeg…. and to Arizona of all places. Let’s be honest, unless you grew up in Manitoba, there’s no way of truly explaining how devastating it was to have your childhood team ripped away from you. Hockey is in our blood and no matter how good the Moose were, they were never the Jets. Flash-forward to 2011, Truth North Sports & Entertainment, The Hockey Gods, and a reluctant Gary Bettman FINALLY brought NHL hockey back to the ‘Peg. The Boys were back!
You always hear about the records where Jerry Seinfeld, The Rolling Stones, and Adele sold-out shows in a matter of minutes, but before the Canadiens could come to town, the “new” Jets had to prove their sustainability. Luckily, the infamous “Drive for 13,000” went about as good as it possibly could have. The Jets sold out in 17 minutes and were forced to shut down their waiting list after 8000 people signed up in only two hours! Combine that energy with champagne being popped at Portage and Main while Stompin’ Tom Connors’ The Hockey Song blared from the speakers and – my lord! – that’s what we call passion folks.

It’s always amazing re-watching this game, not because I was there (I’m a writer and the average Stubhub price was $713) but because you can feel the energy through the television. This is something unique to sports. Those fans had waited 15 long years to cheer for their team, and despite all the odds, they were officially back. Shame on the Canadiens and Mike Cammalleri for spoiling the party with an early snipe after a terrible Johnny Oduya giveaway, but the box score was never the true takeaway from this game. It will always be about the mélange of old and new jerseys, young and old fans, and the contagious euphoria when Nik Antropov netted the first goal for Jets 2.0.
While the Jets had to endure a 5-1 loss in their debut, this season was filled with some unforgettable highlights. It started with the irony of facing the Coyotes in a home-and-home set, which was literally a scene fit for Hollywood. Later, the opportunity to welcome Teemu ‘Finnish Flash’ Selänne back to his rightful home made it all worthwhile. It’s crazy to think that the Jets came back nearly a decade ago, yet COVID-19 has made it all seem like a dream. Obviously, every sports fan would love to be in the building supporting their team, but it’s different in Winnipeg. Maybe it’s the old adage of “You don’t know what you have until it’s gone,” but Jets fans know they can’t ever let it happen again. That’s why, COVID or not, Jets fans will continue supporting their squad in whatever way possible…and if health officials, Jets fans and Justin Trudeau get their way, prepare for a White Out in May.
Twitter:@Jonesinthezone
IG:@Jonesinthezone
Uncategorized
Recent articles from Craig Jones