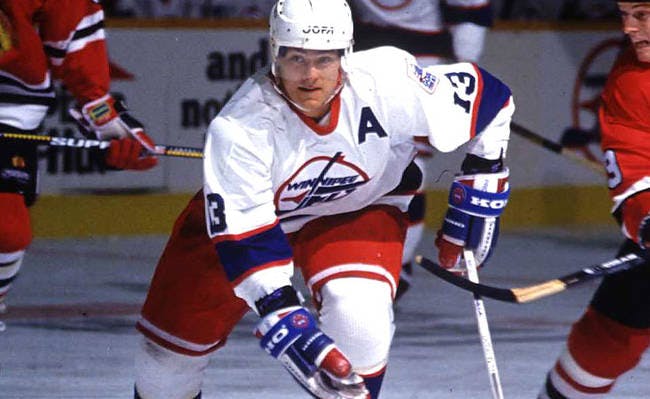 By Craig Jones
1 year ago

The Jets are a club entrenched in pride and tradition. That’s why it felt fitting to introduce a new segment – Friday Folklore. Every Friday we will celebrate some of the greatest moments of the Jets’ storied past. In this edition, we take a deep dive into the goal that etched the Jets into the hockey record books: Teemu Selänne breaking Mike Bossy’s rookie-scoring record.

The journey towards this Jets’ folklore story started when Teemu Selänne made his NHL debut on October 6, 1992, against the Detroit Red Wings. While he wasn’t able to light-the-lamp that Tuesday night at the Winnipeg Arena, he notched two assists and introduced the NHL to the ‘Finnish Flash.’
Fortunately for Jets fans, they only had to wait two days until they got to see their young talent tally the first of the 147 goals he’d score with the Jets logo blazoned across his chest. They say the first is always the hardest… and they were right. After the relief of notching his first, Selänne went on an absolute tear. The Helsinki native notched 11 goals that October, including his first hat trick on October 14, 1992, against the Edmonton Oilers.
The ‘Peg was absolutely rocking as fans came to know they had the two young studs, Keith Tkachuk and Selänne, on their side. Not to mention, they had enforcer, Tie Domi, who would give their superstars the room needed to work their magic. Coach John Paddock knew this was a recipe for success and, keeping his goal-scoring going all winter long, Selänne was able to reap the benefits. While an exciting start to his NHL career, it wasn’t until spring rolled around that breaking Mike Bossy’s rookie scoring record wasn’t just a possibility: it was a certainty.

After either missing the playoffs or being ousted in the first round, the Winnipeg Arena hadn’t had much to cheer for over the past four years. Then, along came Selänne. When setting a record, fans and players always want to be able to do it at home. It just feels right… especially when it’s in the ‘Peg.
Teemu entered the game against the Québec Nordiques two goals away from tying Bossy’s record of 53 goals. But the Finnish Flash wasn’t aiming to tie the Islanders legend’s record, he was hell-bent on shattering it. Selänne must have seen the massive banner in the second deck that read “52..53..54..BOSSY’S RECORD IS NO MORE!” during his warm-up in the packed Winnipeg Arena. I say that because the high-flying rookie wasted no time checking off No. 52. Starting the game alongside Darrin Shannon and Tom Steen, Selänne waited only 15 seconds before he took a sick, full-ice pass from Phil Housley to go in all-alone and beat Stephane Fiset with a dirty backhand.
With 52 in the bank, it was time to make 53 a distant memory. The time to do so came at 16:59 of the second period when Selänne was thankful that Darin Shannon missed his shot from the left hash marks. Why? Well, No. 13 had one of the highest hockey IQ’s of all-time. He was able to pick up the puck after the errant shot and, without hesitation, tucked the puck in on a lightning-quick wrap-around. And just like that, the Canadian wasn’t alone at the top. With an equivalent of 53 goals, he was forced to share the mantle with a Finnish counterpart.
As the famed American swimmer Mark Spitz once said, “Life is true to form; records were meant to be broken.” The game was tied 3-3 and at 9:16 Selänne aimed to do exactly what Spitz had said and leaked out of the defensive zone early in the third period. It seemed only fitting that the man that dropped-the-gloves countless times to protect Selänne was the man that delivered him the assist that would carve his name into the record books. Tie ‘Tuggers’ Domi fired a slick chip-pass that landed a few feet over the blue line. Stephane Fiset tried to beat Selänne to the puck by charging out like a bull and sliding at the puck. However, the Finnish star saw this desperate attempt and used his left hand to score a nasty chip into the empty net. Päämäärä!!!!!!!! (Or as we know it Goal!!!!!!!!). Just like that, the Finnish Flash notched his 54th goal and leap-frogged Mike Bossy to the top rookie scoring spot. As if this moment couldn’t have been any better, Selänne followed the beautiful goal up with one of the most iconic celebrations of all-time: he threw his glove in the air and sniped it in front of 15 thousand raucous fans. It felt like a movie, but somehow it was real life.
Teemu Selänne went on to score 76 goals, 56 assists, and finish with an absurd 132 points to set a rookie record that will likely never be broken. While the Finnish Flash left Winnipeg in unceremonious fashion – blindsided by a trade halfway through 1995-96 season – he still professes his love for the Manitoba capital. Jets fans will never forget the chants of “Teeeeeeemuuuuuuu! Teeeeeeeeeemuuuuu!” raining down from the rafters of the Winnipeg Arena and neither will Selänne. There wasn’t a dry eye in the house when Teemu, donning the Anaheim Ducks logo, returned to Winnipeg for the first time on December 17, 2011. The Finnish Flash may have only worn the Jets jersey for four seasons, but he imprinted himself in Jets folklore for eternity.
Twitter:@Jonesinthezone