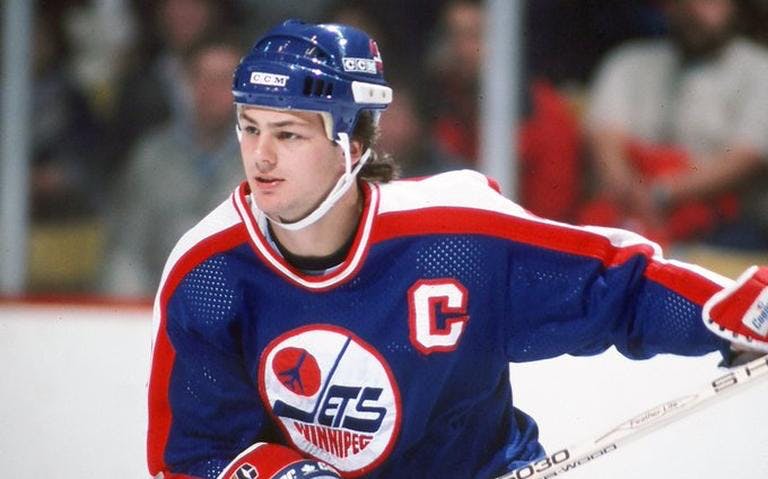 By Craig Jones
1 year ago
It’s hard to believe that it was 39 years, nine months, and 21 days ago that Dale ‘Ducky’ Hawerchuk arrived in Winnipeg. When the organization drafted the Toronto native No. 1 overall in the 1981 NHL Entry Draft, their fortunes instantly changed. The Hall of Famer was drafted ahead of the likes of Ron Francis, Chris Chelios, Grant Fuhr, Mark Hunter, and Al MacInnis.
Of course, he would have loved to have won a Stanley Cup like his fellow draft-class members (which he didn’t), but you’d be hard-pressed to find someone in Manitoba who wishes they had drafted someone else. I’m sure setting the record for the youngest player to ever reach the 100-plateau mark didn’t hurt his popularity, but it was the way he put Winnipeg on his back that endeared him to Jets fans. This should come as no surprise to those familiar with Hawerchuk’s belief in putting the team first. Ducky and the Cornwall Royals dominated the QMJHL. This dominance included two consecutive Memorial Cup championships, a playoff MVP trophy, and Hawerchuk being named the Canadian Junior Player of the Year. Individual accolades are fine and dandy, but Ducky was hell-bent on changing the Jets’ miserable fortunes.
There was a reason the Jets held the number one pick to select Hawerchuk: they had been abysmal in their first two years in the NHL. Nonetheless, in his rookie season Hawerchuk led the Jets to a 48-point improvement and their first NHL playoff appearance. While hockey fans may associate the 80s with the dynasties of the New York Islanders and Edmonton Oilers, Ducky lit the lamp for at least 25 goals and 50 assists during his nine-year tenure in the Manitoba capital. More importantly, he helped lead the Jets to seven-straight playoff appearances and, although they fell short, he was a part of the infamous Winnipeg White Out that drowned the Calgary Flames in 1987.

While Hawerchuk’s on-ice statistics are astonishing, they pale in comparison to his off-ice contributions. Hawerchuk was an integral member of the Winnipeg community during his time with the Jets, where he lived in Gimmli, Manitoba, a small lakeside community about an hour north of Winnipeg. Sharing the Peg’s intense passion for the sport, Hawerchuk loved how hockey-crazy the city was. He wasn’t bothered when fans approached him to offer suggestions and ask questions – he embraced it. Like his hockey-loving fans, Hawerchuk wanted nothing more than to bring the Stanley Cup to Winnipeg. But just as June 10, 1981 was a bright day, June 16, 1990 was a dark one.
Bob Murdoch may have been awarded the Jack Adams Award after his first season in charge of the Jets, but for many citizens of Winnipeg he’s the man that chased their favourite Ducky out of the pond. Hawerchuk knew he had plenty in the tank, so when Murdoch cut his ice-time he started thinking about a change of scenery. True to form, the Jets’ legend never said a bad word about the organization, Murdoch, or general manager Mike Smith. He just wanted to play some puck.
The Jets honoured their legend’s request and traded him to Buffalo for Scott Arniel, Phil Housley, Jeff Parker, and eventually Keith Tkachuk. The former number one pick went on to have five great seasons with the Sabres, followed by having a cup of coffee in St. Louis and ending his career in the City of Brotherly Love. It would have been beautiful if Hawerchuk’s swan song was a Stanley Cup win, but Philadelphia came up short in the finals against Detroit. Hawerchuk had been battling a bad hip for years and finally made the grueling decision to hang up his skates in 1997.
Hawerchuk went on to coach the Barrie Colts for nine years until he was forced to leave for health reasons. Ducky battled stomach cancer for as long as he could and, on August 20, 2020, he tragically lost that battle. The hockey world lost a legend and Winnipeg lost one of their Folklore heroes. Hawerchuk did everything to bring a Cup to Winnipeg. While it’s heartbreaking that he won’t be with us to see it when it does come, there’s no doubt his impact on the Jets, Winnipeg and Canada will live on for eternity.
Twitter:@Jonesinthezone
IG:@Jonesinthezone
Uncategorized
Recent articles from Craig Jones