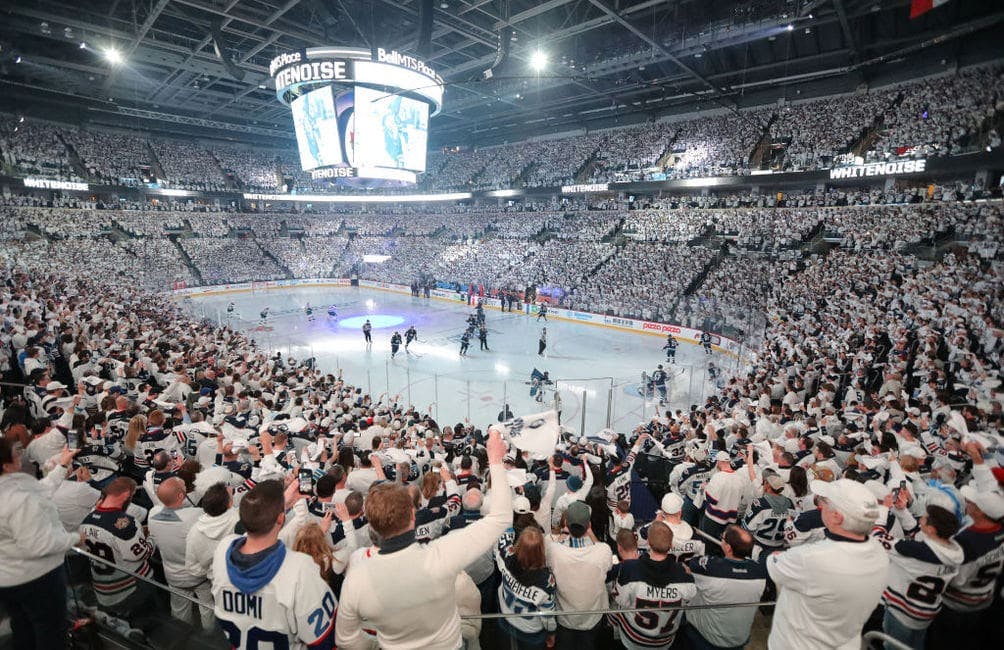 By Craig Jones
1 year ago
Those familiar with the bitter cold of Manitoba know that the only way to overcome it is to embrace it. Taking pride in surviving snowstorms, short days, long nights, and hitting the outdoor rink in -35 degree weather is in the blood of every Manitoban. After the 1987 playoff series against the Calgary Flames, the Winnipeg White Out was injected into Jets fans’ DNA. The Jets were looking for an edge to beat the Flames and a way to counter their ‘C of Red.’ They floated the idea of getting fans to wear red, white, and blue, or maybe just encouraging the fans to wear jerseys. That’s when Rod Palson had a Eureka! moment – The White Out.
The beautiful thing about the Whiteout is that the only way it could work was if everyone bought in. Newspaper headlines, radio ads, a music video, and word of mouth encouraged fans to come together as a collective to ensure this phenomenon would be successful. They responded by not only wearing a plain old white t-shirt but by wearing anything and everything they owned that was white. Pants, masks, helmets, hats, face-paint, and the legendary white pom-pom set the scene for one of the best sports traditions to be born.
After Calgary made the series 3-2, Winnipeg took the ice on April 16th, 1987 desperate to end the series on home ice. While Jets fans had always been rowdy and supportive of their squad, the White Out added that extra juice to the building. The deafening roar of the crowd or, as it’s known in the ‘Peg, the White Noise, drowned out the pre-game show 20 minutes before puck-drop. I can only imagine the mood in the Flames’ dressing room at that moment. Uh-oh, would probably be the only way to sum it up. There’s no way they could have been confident walking into such a hostile atmosphere and it immediately showed. Ron Wilson opened the floodgates by scoring two minutes into the game. Gilles Hamel, Dale ‘Ducky’ Hawerchuk, and Dough Smail followed suit and gave the Jets a commanding four-goal lead heading into the first intermission. Jim Peplinski was able to ruin Daniel Berthiaume’s shutout to start the second, but that’s all the Flames could muster. The Jets popped in two more and the White Out serenaded the Flames with the classic, “Na Na, Na Na, Hey-ey… Goodbye” as the series ended.
While they weren’t the most comfortable, those familiar with the Winnipeg Arena will remember how tight the seats were. Dale Hawerchuk credited the proximity of the seats and the deafening White Noise as creating an intimidating white-glare for the opposition. Randy Carlyle once told reporters, “You’re 36-years-old and played over 1,000 games, and fans give you shivers up your back when they’re cheering for you — and I know everybody in the room got those — so it makes a difference.” In a world where fads have overtaken tradition, it was amazing to watch it return 28 years after its inception. COVID has unfortunately made the likelihood of a White Out happening this year slim-to-none. But just like the cold winters in Winnipeg, the White Out will always be back.
Twitter:@Jonesinthezone
IG:@Jonesinthezone
Uncategorized
Recent articles from Craig Jones