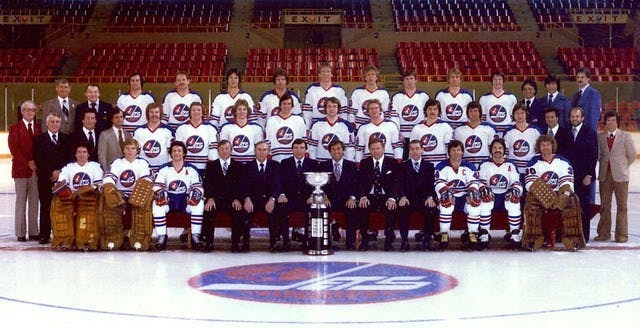 By Craig Jones
1 year ago
While the Winnipeg Jets haven’t had the opportunity to raise the Stanley Cup, they have the distinction of lifting the most World Hockey Association Avco Cups, including the last one ever awarded. On the surface, this may seem like bragging about winning a consolation prize, however, the hurdles the Jets overcame in that final WHA season make that last Avco Cup that much sweeter. That’s why in this edition of Friday Folklore, we are going to examine the last Avco Cup the world ever saw.

PHOTO CREDIT: MBHOCKEYHALLOFFAME.CA
Jets fans were riding high after their Hot Line, Anders Hedberg, Ulf Nilsson, and Bobby Hull led them to their Avco Cup wins in 1976 and 1978. They figured the trio would be able to carry them to back-to-back championships heading into the 1978-79 season…until the New York Rangers entered the fold. The Rangers offered The Super Swedes over $2 million and immediately shattered the Hot Line. Clearly, not the best way to start the season. Combine that with an aging and hurt Bobby Hull, and the fact that their captain, Lars-Erik Sjoberg tore his Achilles tendon in a pre-season game made the possibility of a repeat far less likely. With these omissions, they were forced to bring in four former Houston Aeros to fill the void, leaving the 1978-79 Jets as a different team.
Fortunately for the Jets, the citizens of the ‘Peg are eternal optimists. They proved their belief in the squad by setting a record-high in season ticket sales. They had faith, and the Jets organization did too. The Jets hovered around the middle of the pack until John Ferguson Sr. made the difficult decision to fire coach, Larry Hillman who had led them to the Avco Cup the previous season. Fortunately, Tom McVie took over for the remaining 19 games and led the Jets to a playoff spot. The playoff roster was bolstered when Lars-Erik Sjoberg miraculously returned from his Achilles injury early (true hockey guy). Players and their fans started to believe in the repeat. After earning a first-round bye after finishing above the New England Whalers by a single point, the Jets matched up with the Québec Nordiques. Although the ‘Diques were led by the league’s scoring leader, Ryan Cloutier, the Jets were too much for their French rival and sent them packing back to Québec with a 4-0 sweep. This setup a matchup with Wayne Gretzky and the first-place Oilers.
After their quick work of the Nordiques, the Jets had to wait nearly two weeks before traveling to Edmonton to face the high-powered Oilers. Proving they hadn’t accumulated any rust over this time, the Jets came out with a 3-1 win in Game 1 and squeaked out a 3-2 win in Game 2. Unfortunately, it may have been better for them to stay on the road because, after traveling to the Winnipeg Arena, the Oilers laid the smackdown with a dominant 8-3 victory. Coach Tom McVie was adamant that his team would respond in Game 4 and they did exactly that with a 3-2 win in front of their raucous crowd. While fans of the WHA were accustomed to high-scoring games, nobody expected a dominant 10-2 win by the Oilers in Game 5, which narrowed the Jets series lead to 3-2.

There’s nothing better than watching your team lift the title at home. With over ten thousand fans watching their team take a commanding 5-0 lead in the championship-clinching game, I can only imagine what the atmosphere was like in the Winnipeg Arena. Thanks to goals from Paul MacKinnon, Lyle Moffat, Barry Long, and Willy Lindstrom, they got to enjoy exactly that. The Oilers responded with two goals of their own, but the deficit was too much for them to overcome and the Jets soared to a 7-3 win. When the final buzzer rang, a scene unfolded that will forever be etched in Jets Folklore as fans rushed onto the ice to celebrate with their heroes. Becoming the last team to ever raise the Avco Cup, the Jets overcame what were thought to be insurmountable odds and solidified themselves as the final WHA Champions in history… and I can’t think of a city more deserving to hold that prestigious title than the ‘Peg.
Twitter:@Jonesinthezone
Uncategorized
Recent articles from Craig Jones