Advertisement
Ad
A Step-Back for Team Canada, But a Leap-Forward For the Jets 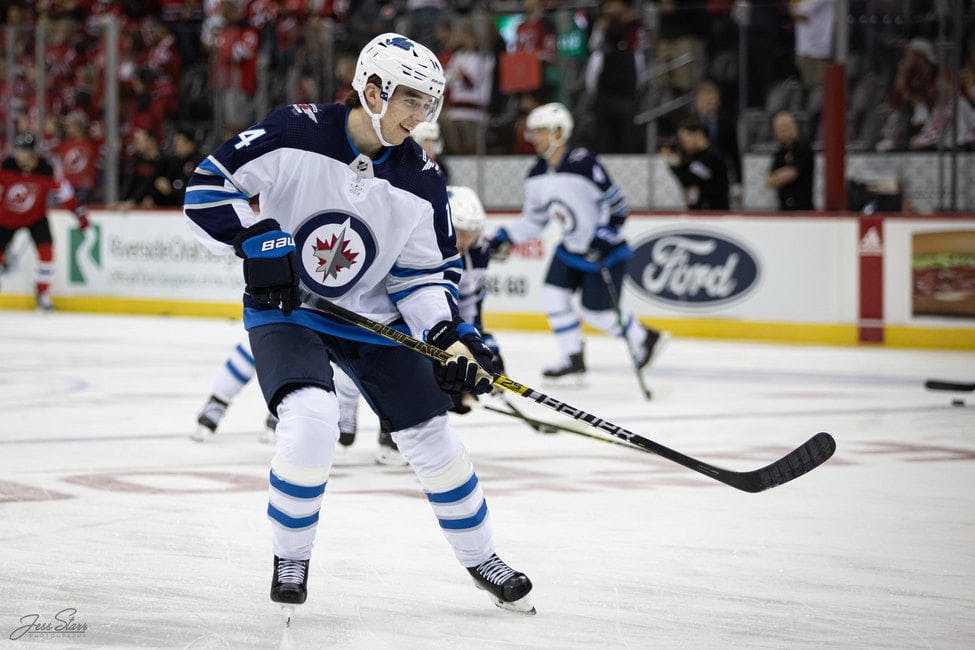 By Craig Jones
1 year ago
Comments
As millions of Canadians woke up today with red eyes from last night’s teary-eyed loss, Winnipeg Jets fans can talk solace in how well their prospects performed during this year’s World Juniors tournament.
All three Jets draft picks walked away with well-deserved medals, and while they may not have been the colour they wanted, that doesn’t take away from how hard they played. Furthermore, the USA team was dominant throughout the tournament and all three prospects suffered defeat to the stacked American squad. But we can’t dwell on the negatives, let’s focus on the positives and what better way than analyzing our Finnish fellas.

After he suited up for eight games during the 2019-20 season, Jets fans were lucky enough to get a glimpse of Heinola before the rest of the world. In his small NHL sample size, the Finnish defenseman tallied one goal, four assists, and boasted an impressive +3 plus-minus. The Honkajoki native rode that momentum to a dominant World Juniors performance. Yes, he wasn’t able to light-the-lamp this year, but that’s not what the Jets will need from their young D-man.
Advertisement
Ad
Advertisement
Ad
In the future, they are going to need a minute-munching defenseman and Heinola proved he was more than capable of doing so as he led the Finnish team in minutes per game with 23:59. Combine that with his four assists and +3 plus-minus, and the future certainly looks bright for the Jets’ blue line. Nobody will call Heinola flashy and his game may not mimic that of Drew Doughty or Erik Karlsson, but their lack of depth at defense is no secret. While Heinola may not single-handedly solve that weakness, he will certainly give Jets fans hope.

🚨🇫🇮 Almost a tie game! @leijonat's 2nd goal gets challenged for off-side, and Henri Nikkanen's goal will be the only one on the board. #WorldJuniors pic.twitter.com/qbr1vOivEj

It’s no secret that Winnipeg loves drafting Finnish talents, but to snag a stud like Henri Nikkanen in the fourth round may end up being their shrewdest move to date. Nikkanen’s draft stock dropped after he was relegated to the fourth line of a dominant Jukurit team in the Finnish league, but eyebrows were certainly raised after this year’s World Juniors tournament. The Finnish center tallied two goals, one assist, and boasted a +1 plus-minus in seven games played.
Advertisement
Ad
Advertisement
Ad
While this may not be overly impressive compared to teammates Anton Lundell and Kasper Simontaival, the Jets prospect showed his tremendous upside. The hope is that he is able to develop for a few years in Europe, or if the AHL season gets the green-light, he can get meaningful minutes for the Manitoba Moose. The Mikkeli native’s 6-foot-2 and 185 lbs frame gives him the size needed to compete with the big boys, and Cheveldayoff has to be confident that his late-round selection could blossom into a solid NHL talent.

There is no way for a fan to truly grasp the disappointment Cole Perfetti must have felt after their devastating loss to the Americans. Fortunately for Perfetti, his future is in the ‘Peg. Having said that, the Canadian forward still tallied two goals, four assists, and boasted an impressive +5 in seven games played. This included an absolute snipe show against the Russians in the semi-finals.
Advertisement
Ad
Advertisement
Ad
After the mandatory quarantine period, Perfetti is expected to make an appearance at this year’s training camp. Whether he makes the active roster or not will depend on how he performs, but he would be a fun addition to this year’s Taxi Squad. This year’s tournament performance aside, the Jets’ 10th overall pick notched an impressive 111 points in his final season with the Saginaw Spirit. There is no denying the Ontario native can find the back of the net, and if he is able to put on a few pounds of muscle, he will certainly be a force to be reckoned with.

Let’s be blunt, Canada lost… and it hurt. Luckily for Jets fans, the NHL season is right around the corner and three of their prospects dominated in one of the world’s most prestigious tournaments. While that may not wash away the pain, if the Jets win the Stanley Cup, I don’t think many of us will be thinking about that Silver medal…or the Americans.
Advertisement
Ad
Advertisement
Ad
Twitter:@Jonesinthezone