Jetsnation is a fan site with no direct affiliation to the Winnipeg Jets, True North Sports and Entertainment, NHL, or NHLPA 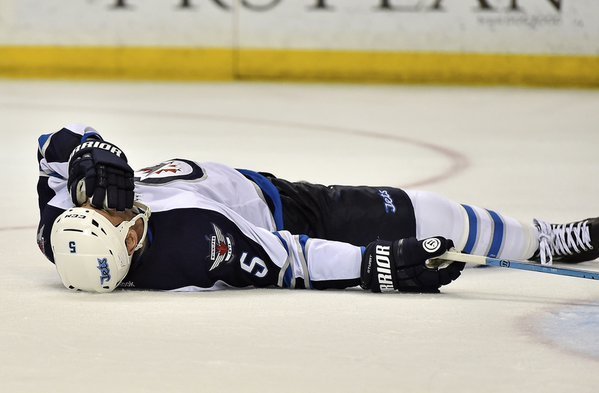 The Winnipeg Jets are on the penalty kill, a lot.

Since the franchise move to Winnipeg, the team has been called for 141 more penalties than they have drawn. This is the second worst differential in the entire NHL, just 20 less than the Boston Bruins and 40 more than any other team. Over the last two seasons the Jets have the worst penalty differential.

A lot of time on the penalty kill means a lot of minutes for their top killers. Mark Stuart sits at 20th in the league for short handed minutes since Jets’ inaugural season.

So how has Stuart performed over that time?

Here is how each of the Jets defenders have performed in allowing different types of shots for those with at least 200 minutes since the move: 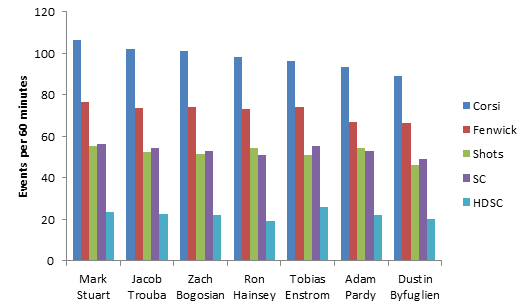 For those new to shot metrics, Corsi is all shots (blocks, misses, saves, goals), Fenwick removes blocked shots, shots on goal is the traditional saves and goals. Scoring chances limit shots to only particular ones based off of shot location and type, as defined by WAR-On-Ice. High-Danger SC further limits these scoring chances to only the ones in the low slot.

The higher even Corsi and Fenwick events better evaluate how players have performed and will perform as they have the strongest relationship with future goals. In otherwords, players who struggle in goals but do well in Corsi or Fenwick tend to do well in goals in the future, or vice versa. Scoring chances or HDSC lose predictive strength but are descriptive in letting you know what type of shots occurred.

In terms of ranking, where first means allowing the most events against relative to ice time, Stuart has ranked for the Jets:

Some may shrug these differences off as playing against top power play units; however, when we look at the stats of who they face on average the largest difference is only about 0.5 Corsi event per 60 minutes or 0.4 shots on goal per 60 minutes. Stuart doesn’t even rank the highest in competition stats for those numbers.

Now, this is not the first time we’ve noted that Stuart struggles on the penalty kill. We’ve discussed Stuart being the worst on the team before. So, I thought I look a little deeper and compare Stuart to the rest of the league over the 2011-present sample for all defenders with 200 or more penalty kill minutes.

What I found surprised even me…

Again for those new with shot metrics, we have switched over to relative metrics. This looks at how the team performs with the player on the ice versus on the bench. Due to differences in team strengths, systems, and other factors, relative metrics tend to identify talent better and players changing teams tend to sustain more of their relative numbers than their raw numbers.

What’s so surprising is how poorly Stuart ranks. I was guessing he’d be one of the worst, maybe somewhere in the top 30-40, but Stuart actually ends up the worst. Period.

Out of the 171 defenders in the NHL to play 200 or more minutes (so 5.7 defenders per team), no team does worse with the defender on the ice versus on the bench than the Jets do with Mark Stuart in terms of shots, possession, and chances. Only 4 defenders do worse in HDSC, those four being Brad Stuart, Toni Lydman, Dalton Prout, and Filip Kuba.

The Jets are limited in their options to replace, but all four of Adam Pardy, Dustin Byfuglien, Tobias Enstrom, and Jacob Trouba have out performed Stuart. The Jets may not be able to take Stuart off the penalty kill completely, due to Stuart not being the strongest in 5v5 nor being a power play option, but he should not be the skater the Jets look to first and lean on the most.

What is your opinion on Dustin Byfuglien?
Still supportive and willing to patiently wait for his return
29%, 182 votes Frustrated, but ok with waiting a little longer for his return
22%, 139 votes Love Buff, but wanting the Jets to make a move to help their current season
21%, 129 votes Forget Buff, he's as good as retired. Time for the Jets to move on from him.
28%, 175 votes Total Votes: 625 View Comments

Not a member? Join the Nation

Please enter your email address to reset your password.

We use cookies to ensure that we give you the best experience on our website. If you continue to use this site, we will assume that you are happy with it.OkPrivacy policy